Located between Greece and Turkey, the Aegean Sea provides an important trade route for Europe and Asia. The Aegean Sea is an elongated embayment of the Mediterranean Sea. In the north, it is connected to the Marmara Sea and the Black Sea by the Dardanelles and  Bosphorus straits. The Aegean Sea surrounds many Greek and Turkish Islands and provides access to all of them. Back in History, the Aegean Sea was a very useful part for many Greek warriors. To know more, let us go through some interesting facts about the Aegean Sea. 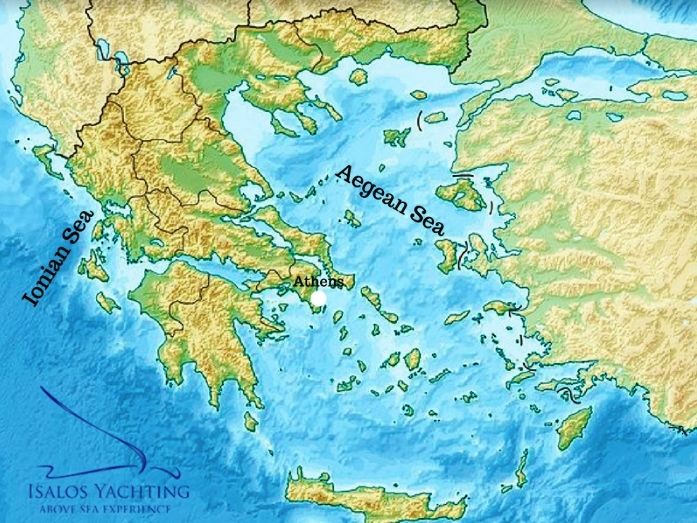 It is said that the sea was named after the Greek town of Aegae. Another derivation may be possible from the Greek word ‘aiges‘ means “waves.”
Source: Wikipedia

The Aegean Sea is an arm of the Mediterranean Sea. It is a bay located between Greece and Anatolia Peninsula or Asia Minor.
Source: britannica.com, Image: Wikimedia

There was a civilization named the Aegean Civilization; was a Bronze age civilization that flourished on the islands in the Sea around 2 millennium BC. In 1876 a German archaeologist, Heinrich Schliemann discovered it.
Source: britannica.com

The area in the Aegean Sea is known as the Aegean Islands. There are more than 1400 islands in the region in which Crete, Rhodes, Karpathos, Kasos, etc. are some major islands. Crete is the largest Island in the region.
Source: britannica.com, Image: earthobservatory.nasa.gov

6. Home Of The Tourist Giants

The Island of Santorini is situated in the southern region of the Aegean Sea, is one of the renowned tourist destinations in the world. Every year, millions of tourists visit the island. This island is famous for its sea beaches, white architecture and village life.
Source: visitgreece.gr, Image: experitour.com, Image: contentedtraveller.com

Traditionally, the Aegean sea was known as the ‘Archipelago,’ which means “chief sea” or “main sea” in Greek.
Source: scienceforkidsclub.com

The maximum depth of the Aegean Sea is at the eastern side of Crete, where it reaches 3,543 meters (11,624 feet) below the sea’s surface.
Source: justfunfacts.com

According to some, the ancient Greek philosopher, Plato, has mentioned an island in his works named, ‘Atlantis’ which does not exist now. However, according to historical records, the Atlantis was a fictional island which was used by Plato in his works ‘Timaeus’ and ‘Critias.’
Source: Wikipedia, Image: Wikimedia

Plato has referred all the Greeks who were living on the islands in the Aegean Sea, like ‘frogs around a pond’ in his book ‘Phaedo.’
Source: classicsvic.wordpress.com

13. Sea Of Many Important Harbours

The Aegean Sea is the sea with many important harbours on its coast. Some harbours are;  Port of Thessaloniki, Port of Piraeus, Port of Heraklion, Port of Chania, Port of Volos, İzmir Harbor, Güllük Port, etc.
Source: ports.com, Image: Wikimedia

Shukla Sundeep - July 18, 2015
0
In the beautiful laps of the Andes Mountains in Peru, above the Urubamba River Valley, Machu Picchu is truly a gem of South America....