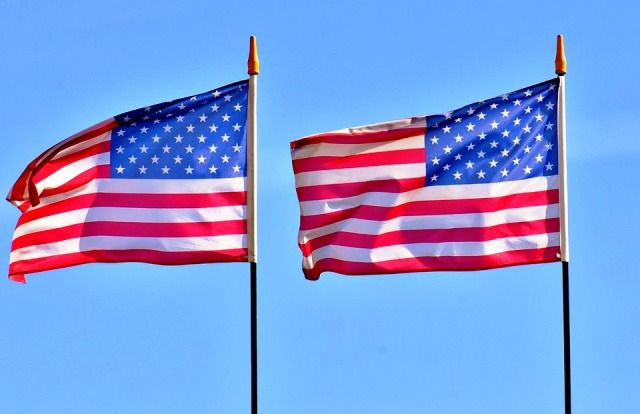 The first flag of America was called “The Continental Colors” or “Grand Union Flag” which consisted of thirteen stripes and the Union Jack at the canton. After the declaration of Independence in 1776, the flag hurled in the United States and referred to as the first flag of America.
Source: britannica.com, Image: Flickr

When the first flag was adopted in 1777, it had thirteen stars and thirteen stripes. The stripes were red and white on the alternate rows and white six-pointed stars on the blue field. Thirteen stripes represented the 13 British Colonies. The new flag was hoisted in June 1777 by the Continental Army at the Middlebrook Encampment. Francis Hopkinson designed the flag.
Source: Wikipedia, Image: Wikimedia

Betsy Ross was an American upholster. She has been credited with making one of the first American flags. She designed a flag with thirteen stripes; red and white on alternate rows, thirteen five-pointed stars in a circle on the blue field. The Betsy Ross flag is featured on the seal of the United States Department of Veteran Affairs. However, this flag has been used for only celebrating the nation’s birthday anniversaries.
Source: encyclopedia.com, Image: Pixabay

In 1795, when Vermont and Kentucky entered the Union, they became 14 and 15 states respectively. The number of stars increased from 13 to 15.
Source: mentalfloss.com

5. One Star Represents One State

In April 1818, Congress passed a plan that if one state is admitted, one new star will be added to the flag. At that time, 20 stars were on the flag. Until 1959, 48 stars were added. The current flag has fifty stars as in 1959, the state of Hawaii and the state of Alaska were admitted to the United States.
Source: britannica.com, GIF: Giphy

6. A High School Student Designed It

The current flag was designed by a 17 years old High School student, Robert G. Heft. He passed away in 2009. He hailed from Lancaster, Ohio.
Source: theculturetrip.com, Image: Wikimedia

It is expected that the Commonwealth of Puerto Rico could become a U.S. state. People in Puerto Rico and Washington DC voted for Puerto Rico to be a U.S. state. A 51-star flag has also been designed for it and this was also designed by Robert G. Heft.
Source: abcnews.go.com, Image: Wikimedia

The current flag of the United States is the 27th version of the U.S. flags and the longest used flag since 1960. It is the first flag to have lasted more than 50 years.
Source: mentalfloss.com

If the flag is not to be used or to be repaired anymore, it must be destroyed by burning it in a respectful manner. If it is soiled, it must be washed and dry cleaned.
Source: theculturetrip.com, Image: Marines.mil

During the 1812 War, when the British Royal Navy attacked Fort McHenry of Maryland, the flag that flew over the Fort McHenry still exists. It is a 15-star flag that inspired Francis Scott Key to write a poem which later became the National Anthem of the United States. The flag is preserved in the Smithsonian National Museum of Natural History in Washington DC.
Source: si.edu, Image: Wikimedia

On May 30, 1916, then President Woodrow Wilson issued the Presidential Proclamation for establishing the flag day as the anniversary of the flag resolution. On August 3, 1949, then President, Harry S. Truman signed an act of Congress to designate June 14 of each year as the National Flag Day.
Source: theculturetrip.com

14. From Sunrise To Sunset

According to Federal Flag Laws and Regulations, the flag should be displayed from sunrise to sunset except during murky weather. The flag can be shown for 24 hours if it is illuminated. Otherwise, it should not be shown for 24 hours. There are only a few places where the flag is shown for 24 hours including Fort McHenry, National Monument and Historic Shrine, Baltimore, Maryland, Flag House Square, Baltimore, Maryland, United States Marine Corps Memorial (Iwo Jima), Arlington, Virginia, On the Green of the Town of Lexington, Massachusetts, The White House, Washington, D.C., United States customs ports of entry, Grounds of the National Memorial Arch in Valley Forge State Park, Valley Forge, Pennsylvania, etc.
Source: pbs.org, Image: Pixabay

In 1909, American explorer, Robert Peary place the American flag on the North Pole, the northernmost point on Earth.
Source: pbs.org

On July 21, 1969, American Astronaut, Neil Armstrong was the first person to step on the moon. He placed the American flag on Moon. Five other flags were also planted during the Apollo programs.
Source: theculturetrip.com, Image: Pixabay

Krishna - November 15, 2016
0
Israel officially known as the "State of Israel" is a country in the Middle East. It is situated at the southeastern shore of Mediterranean...