Being found everywhere in all over the United States and Canada, Bald Eagle is the national symbol of the United States of America. Once on the verge of extinction, now these beautiful birds are expanding their horizon in North America. Having special qualities from its eyes to talons, a bald eagle is one of the most adept predators in North America. To know more, let’s dig into some interesting facts about Haliaeetus leucocephalus, Bald Eagle. 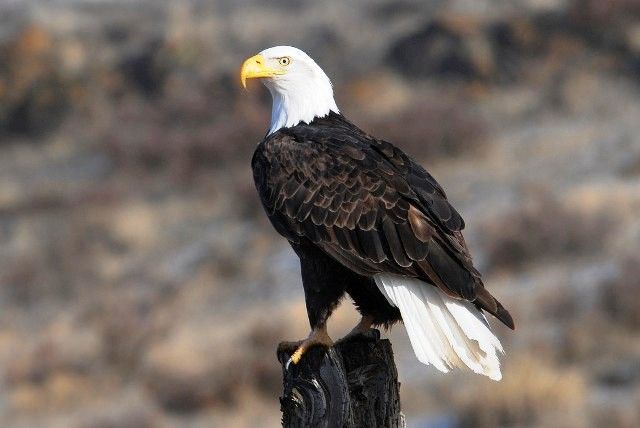 1. They Are Not Bald

The juvenile bald eagles are not bald; they have brown heads. A bald eagle gets mature at the age of 5, that’s when it gets white hair.
Source: mentalfloss.com, Image: Flickr

Like head, their tail is also bald. However, juvenile bald eagles don’t have head and tail white but brown.
Source: britannica.com, Image: fws.gov

4. They Are North Americans

The bald eagle sounds like a kind of high-pitched giggle or a weak scream. This voice is so unimpressive that Hollywood voice editors often dub over bald eagle calls.
Source: mentalfloss.com, GIF: reactiongifs.net

In the animal kingdom, Bald Eagles and Falcons have the best eyesight. These eyes are designed to spot the prey from high above; from around a mile away, and then swoop down fast to catch it. They have six or seven times sharper vision than that of a human.  They can also see in ultraviolet light.
Source: farmersalmanac.com, GIF: Gfycat

One of the most interesting facts is that they can dive and glide at speeds of over 100 miles per hour.
Source: farmersalmanac.com, GIF: gfycat.com

9. Female Is Heavier Than Male

Bald Eagles build largest nests in all bird species. These nests are also heavy and made up of twigs and sticks. The largest recorded bald eagle’s nest was discovered in St. Petersburg, Florida. It was about 20 feet deep and 9.5 feet in diameter. It weighed around to 3 tons.
Source: farmersalmanac.com, Image: Flickr

Normally, they snatch food, but they hunt mostly fish. They can even hunt land animals, like rats, mice, squirrel, snakes, etc. With the help of their visual power, they spot prey from a mile high in the sky and swoop down to catch it. They can lift the prey weighing as much as their own weight and sometimes more than it.
Source: animalplanet.com, GIF: Reddit

Their talons are yellow in color and dangerous for their prey. They are very sharp and strong. Just before hitting the ground or the surface of the water, they unlock their talons, spread their wings, catch the prey, and fly back up into the sky.
Source: farmersalmanac.com, Image: dinocro.info

The bald eagle select one partner for life. Only in the case of death or disappearance, the other one will find a new partner.
Source: animalfactguide.com, Image: Flickr

14. They Mate Where They Were Born

In most cases, the bald eagles mate where they were born. For laying up eggs, they go to their native place and at one time, a female can lay up to 7 eggs, however, normally, it lays around 2 or 3. Laying eggs takes place mostly in February.
Source: Wikipedia, Image: Pixabay

They have an average life span of 20 to 30 years. However, they can live to be 35 years old or more.
Source: kids.nationalgeographic.com

16. Migration To The USA And Mexico

In winters, the bald eagles migrate to the United States and Mexico from Canada to avoid the chilly cold. They return to Canada in the summer seasons.
Source: mentalfloss.com

17. They Are Good Parents

The male and the female bald eagles take care of their kids very well. They both feed their young ones. The parents cover their young ones in the nest with its wings, like an umbrella, to protect them from hot Sun and heavy rainfall or snowfall.
Source: farmersalmanac.com, Image: Flickr

Krishna - November 14, 2016
0
Argentina is South American Country and second-largest in South America after Brazil. It is one of the largest Spanish-speaking countries in the World. Argentina is...