Whether it’s the world of the princesses and their magical fairyland or the world of transformers or dinosaurs, the trail in the majestic Redwood forest or going LA LA LA in ‘Malibu,’ California is a magnet to charismatic wonder and fun. Likewise is it’s unique and proud Flag. Let us unfold some facts about the Flag Of California:

1. Thou Shalt Be Thy Flag

2. The Flag Of California 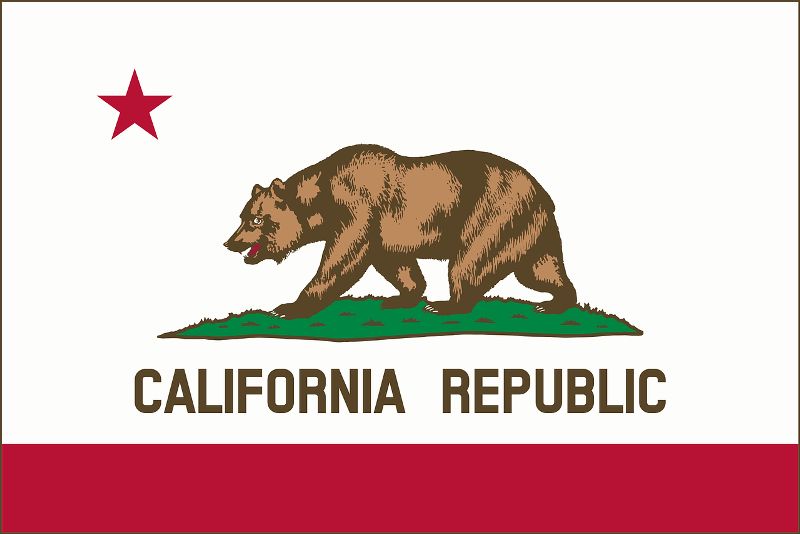 The Flag Of California has a white background with a red stripe in the bottom. There is a five-point red star at the top left corner of the flag and a Bear in the centre, walking on the patch of grass. The flag flipped vertical is the State Ensign.
Source: Wikipedia, Image: Wikimedia

3. Who Designed The Flag?

The flag was designed by William Todd, who was the nephew of Mary Todd Lincoln, wife of Abraham Lincoln, the legendary president of United States
Source: statesymbolsusa.org

4. Horse Without Bear- Not Possible

During the 19th century, there was a possibility of war between the United States and Mexico. With Bear being ubiquitous, the saying would go like ” you couldn’t ride on a horse for a mile without seeing ten grizzly bears.” The people of california put Bear as an emblem to scare the mexicans away. That is how we see the flag of california with the Grizzly Bear, walking on the grass. It symbolizes Strength. Bear is also the State animal of California.
Source: scpr.org, Image: Wikimedia

The Lone star in the Flag of California is associated with Juan Alvarado, the Governor of Las californias from 1837-42 and his rebellion against mexicans. His Flag contained a lone star in the white background. The star as we see now in the flag represents Sovereignty.
Source: Wikipedia, Image: Wikimedia

6. The Background And The Stripe

The background of the flag is white, and it represents purity. The Red Stripe in the bottom of the flag symbolizes Courage and people of California.
Source: worldatlas.com

In 1846, in Bear-Flag Revolt, which occurred during the American-Mexican War, a group of American settlers proclaimed independence after the revolt from Mexicans. They hoisted the original Bear Flag in Sonoma. After the American naval forces seized the area, the flag of California republic was replaced by Star and Stripe.
Source: britannica.com

Grizzly Bears were on the hunt to the breach of distinction; until 1889, an upcoming newspaper named mogul decided to make Grizzlies star again. They sent one of their journalist Allen Kelly to find a bear, with external bits of help and link a bear was found. They named him “Monarch,” and put him on show in the Golden Gate Park. Unfortunately, the bear died in 1911. By the time, Flag of California had been adopted, so they remodelled the bear in an image of Monarch.
Source: scpr.org

The flag of California is so famous that it has become the fashion icon for clothes, accessories and a lot of other things.
Source: latimes.com, Image: Flickr

The Flag of California comes in the Top 10 of the 50 US flags. It is ranked as No.8.
Source: thrillist.com

Krishna - February 3, 2017
0
Bangladesh, located in the north-eastern part of South Asia, a tiny country surrounded by India and Bay of Bengal. The country has the great...