From throwing tomatoes in ‘La Tomatina, Buñol’ to running for your life against bulls in ‘San Fermin, Pamplona’; Spain is the realm of crazy festivals. And, if you love to get all greasy; Spain has just an unusual festival for you. Cascamorras or better known as ‘Fiesta de Cascamorras’ in Spain. Let’s have a look at the facts related to Cascamorras: 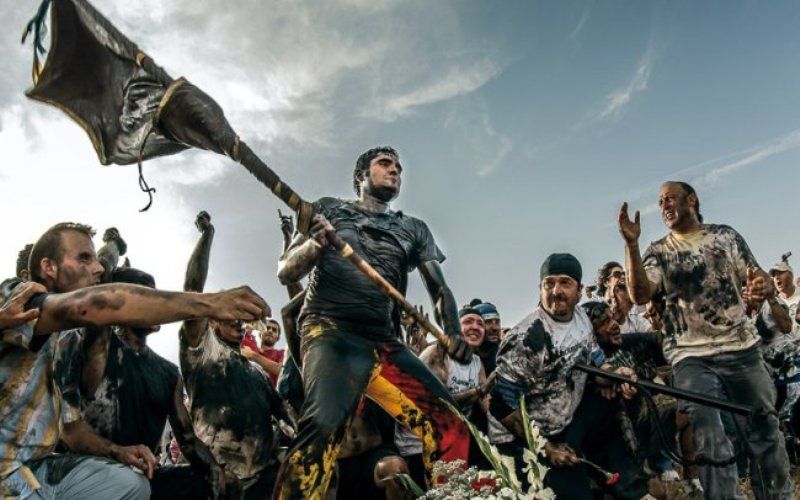 1. The Festival Has An Interesting Story

Among all the legend, most widely accepted one is that of the workman from Guadix nicknamed Cascamorras who was building a church in the land of Baza and found the sacred image of ‘Virgen de la Piedad (Our Lady of Mercy) buried in the ground. Both Guadix and Baza claimed the image of their own, but Bazan’s kept it to themselves. The fellow Guadix encouraged Cascamorras to steal the image. Although he attempted to take the image to Guadix, Bazan’s snatched it in the way. When Cascamorras returned empty-handed, his fellow villagers were disappointed and castigated him. Bazan’s declared if any chosen person from Guadix will be able to reach the image without getting stained, they could take the image. That is how the festival started.
Source: juntadeandalucia.es, Image: ideal.es

The festival is celebrated by throwing ink over or rubbing greasy body against the chosen accitano (a person from Guadix to grab the image), who dresses as a clown called Cascamorras accompanied by the fellow villagers. The target is to stop Cascamorras to steal the image by staining him with dark ink.
Source: eldiario.es, Image: hlimg.com

3. Two Days To Get Dirty

There are two days of celebration of the festival, one in Baza on September 6 when Cascamorras comes in an unsuccessful attempt to reach the image, and September 9 in Guadix, when Cascamorras return after defeat.
Source: andalucia.org, Image: eldiario.es

5. Wanna Be Cascamorras? Ready To Bash Your Head!

If you ever thought of being Cascamorras. The term Cascamorras translates to ‘bash his head.’
Source: andiamo.co.uk, GIF: Gfycat

The Cascamorras uses a stick known as ‘Porra’ made of rubber foam ball tied to a wooden stick by a rope to defend himself. Cascamorras is also accompanied by a team of cohorts, which include a flag bearer and a drummer who put their efforts in vain to protect him in Baza streets.
Source: el-cascamorras.com

The mythical creature or Cascamorras looks like a clown. His suit is made of two pieces of jacket and trousers, with the felt fabric of three main colors: red, yellow, and green. The whole suit is pictured in cascading, moon, sun, stars and a huge sunflower at the back.
Source: el-cascamorras.com, Image: ideal.es

8. Drink And Be The Cascamorra

The celebration of the Cascamorras Festival starts days before the actual festival, during which the Cascamorras is chosen by wine a drinking contest.
Source: andiamo.co.uk

If you get lost in the festival and don’t know where to go, you should follow the street by black plastic sheets that are used to cover statues and walls; as it leads to the church where you may meet your dear ones.
Source: andalucia.com

The year 2009 became a year of controversy when a private person registered his name to represent the festival on behalf of Guadix. The then mayor of Guadix, Santiago Pérez, requested people of Guadix to not to send Cascamorras to Baza until the matter was resolved.
Source: elmundo.es

11. Ancestor Of Capture The Flag

Cascamorras is said to be the most direct antecedent of the gameplay ‘Capture the Flag.’
Source: Wikipedia, GIF: imgur.com

12. Festival That Once Was Call Of Death

In earlier times, the festival was not only for fun but was a serious matter to the people of Baza and Guadix. Bazan’s would chase the Cascamorras in the street, sometimes injuring them and in the worst cases killing them too.
Source: andiamo.co.uk