Home History 8 Interesting Facts About The Flag Of England

The English flag is taken from the St. George Cross which is associated with St. George who was a soldier to Roman Emperor, Diocletian. The English Flag is represented by a red cross on a white field. First used in 12 century AD, the English flag is one of the oldest flags in the world. It represented the British across the globe as the British created their vast Empire on the planet. Let us know some more interesting facts about the English Flag. 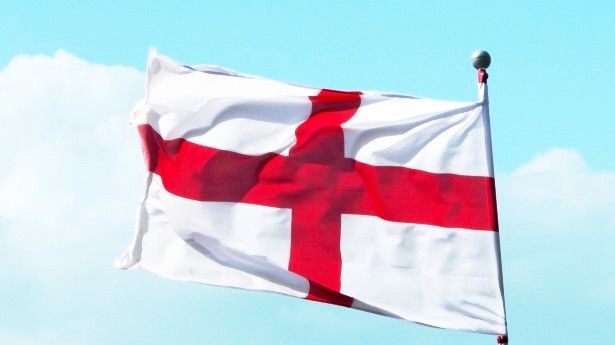 Henry II of England and Philip II of France signed an agreement in 1188. According to Agreement, Henry would use a white cross and Philip would use a red cross. However, later, the English switched the red cross. The reason is not clear.
Source: metro.co.uk

The Red Cross is actually Saint George Cross. Saint George was a patron saint of England who actually served as a soldier of the Roman Emperor, Diocletian. It is said that at the battle of Antioch in June 1098, St. George sitting on horseback was leading the Crusaders. His flag bore a cross.
Source: britannica.com

3. Was It Adopted From Genoa?

Genoa is a city in Italy. It was a powerful maritime city in the middle ages. After the religious war, England adopted its flag from the city’s flag. For the privilege, the English monarchs paid tribute to the Doge of Genoa (ruler of the Republic of Genoa) until the republic collapsed. The flag of the city of Genoa
Source: theguardian.com, Image: Wikipedia

4. One-Third Of The Union Jack

The Union Jack or the Flag of the United Kingdom is comprised of three different flags; the flag of England and Wales (St. George Cross), Flag of Scotland (St Andrew’s Cross), and Flag of Northern Ireland (Saint Patrick’s Saltire).
Source: metro.co.uk

5. The Flag Of London Is Very Similar

The flag of the city of London and the flag of England is almost the same. The only difference between the two flags is that the flag of London has a red sword in its upper left canton.
Source: mylondon.news, Image: Wikipedia

The White Dragon is an alternative flag of England. It is a battle flag of England. The flag was flown by Harold II when he devastated the Norse Army in the battle of Stamford Bridge in 1606.
Source: wearetheenglish.com, Image: Wikipedia

7. Some Other Cities Also Use This Flag

The north Italian cities like Bologna and Milan also use this flag. The flag of Guernsey (An Island in the English Channel) is also almost the same. Additionally, the flag of Guernsey bears the norman cross within St. George Cross.
Source: Wikipedia, Image: Wikimedia

The St. George Cross represents England at sports. The Union Jack only represents the union of England, Wales, Scotland, and Northern Ireland. At sports, all these countries are represented by their separate flags.
Source: metro.co.uk