Hyde Park is a prime attraction in London for tourists and locals alike. Be it the lush green beauty, the picturesque setting or the architectural marvels within the sprawling expanse. But there is a lot more to Hyde Park than just what meets the eye. Listed below are some lesser-known riveting facts about one of London’s greatest landmarks. 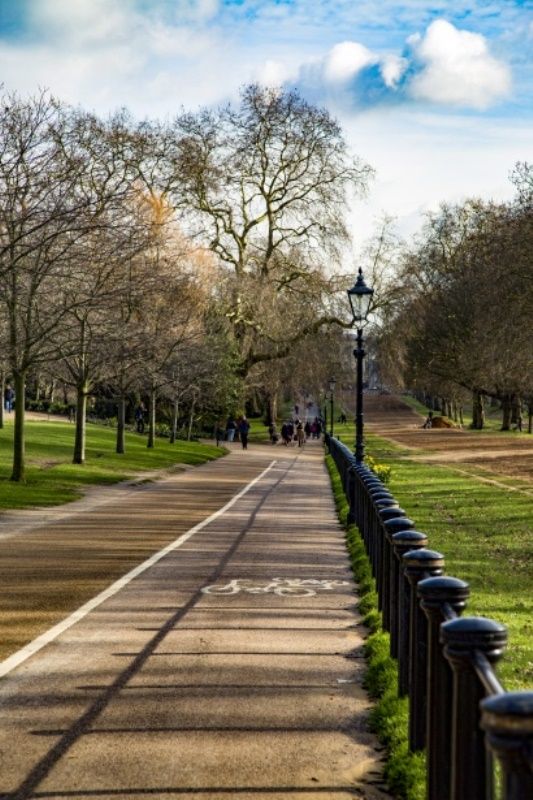 Hyde Park is not only the largest park in Central London but also a Royal Park. King Henry VIII had confiscated the Park from the monks of Westminster Abbey in the year 1536. He had then made it into a royal hunting ground. The park was opened for public access in the year 1637 by King Charles I and in no time, it became one of the most popular places for Parades and Public Demonstrations’.
Source: Wikipedia, Image: Wikimedia

The 625 acres expanse of the park includes 275 acres of Kensington Gardens. The park has over 4000 trees, a meadow, ornamental flower gardens, and a large lake.
Source: Wikipedia, Image: Flickr

There is a lot more than just trees to the boutique park. One can also find so many hidden exquisite monuments and statues in and around the park. One of the most sought after monuments is the Diana, Princess of Wales Memorial Fountain, which was built using 545 pieces of genuine Cornish granite. The Joy of Life fountain and the famous statue of Achilles are also some of its other remarkable landmarks.
Source: archdaily.com, Image: Flickr

4. The Statue of Achilles

The Statue of Achilles also known as the Wellington Monument is an 18 feet monument dedicated in remembrance of the first Duke of Wellington, Arthur Wellesley, and his conquests in the Peninsular and Napoleonic Wars.  It is situated near Queen Elizabeth Gate at Hyde Park corner and was the first statue to be installed in the park and was commissioned by a patriotic, upper-class society, known as Ladies of England.
Source: Wikipedia, royalparks.org.uk, Image: Flickr

5. Home to the Beatles

The Beatles lived in a flat on Green Street, Mayfair near Hyde Park in the Autumn of 1963. This was the only home in which the famous four lived together.
Source: medium.com, Image: Wikimedia

London winters offer a breathtaking view of the city with snow-clad streets and houses. Between November and January, Hyde Park also offers tourists and locals an Ice Skating rink, a Circus, an Ice Palace and much more as a part of its Winter Wonderland Celebration. This celebration is a must-visit for both children and adults.
Source: Wikipedia, hydeparkwinterwonderland.com, Image: s0.geograph.org.uk

The Hyde Park Bandstand, one of the oldest in Britain, was constructed in the year 1869. Initially, it was placed in the Kensington Gardens but was then moved to Hyde Park in the year 1886. This gorgeous antique beauty is still used by musicians and performers from all over the world, and the unique octagonal roof is known to produce enhanced sound quality.
Source: Wikipedia, royalparks.org.uk, Image: Wikimedia

Hyde Park is a natural habitat for a diversified species of flora and fauna. It is home to some of the most beautiful species of songbirds like the robins and dunnocks. One of the most interesting sites to look at is the Weeping Beech, a phenomenal tree that appears as if it was grown upside down.
Source: Wikipedia, royalparks.org.uk, Image: Wikimedia

Located at the south end of Hyde Park is the Rotten Row, an acclaimed bridle path, which is now used as a horse riding and jogging route. The road is 6.4 kilometers long and is now actively used by visitors for leisure activities.
Source: Wikipedia, Image: Flickr

Hyde Park is open for public access all-round the year from 5 am to 12 am, and there are no charges on the entry for any visitor.
Source: royalparks.org.uk, Image: Flickr

The Wellington Arch is located at Hyde Park Corner, Central London. It was erected as a tribute to the Duke of Wellington, for commemorating Britain’s victories in the wars with Napoleon.
Source: english-heritage.org.uk, Wikipedia, Image: Flickr

The exquisite Marble Arch that stands at Hyde Park’s North-Eastern corner, was originally erected as a state entrance to the majestic Buckingham Palace. The structure was designed by John Nash in the year 1827. It was only when Queen Victoria had decided to expand and renovate the palace in the year 1847, the arch was dismantled and moved to the park. Back in the days, a tiny police station was housed within the arch; space for which can be spotted till today.
Source: Wikipedia, Image: Wikimedia

Separating the Kensington Gardens and Hyde Park is the Serpentine Lake also known as the Serpentine River. It is a 40-acre lake that was built under the command of Queen Caroline in 1730. Along the boundaries of Hyde Park and Kensington Gardens is the Serpentine Bridge, which was built in the 1820s to carry the newly built West Carriage Drive. The Lake offers a variety of recreational activities such as swimming, boating, solar-shuttles, and it is home to several species of water birds such as the famous water swans.
Source: Wikipedia, Image: Wikimedia

The Speakers’ Corner in Hyde Park is an open space for public speaking, debates, and demonstrations in London. It is located at the North-east edge of Hyde Park near the Marble Arch and Oxford Street. This corner allows the general public to express their views and opinions on anything under the sun as long as the police consider their speeches lawful. Till today, this is a Sunday morning ritual at the park.
Source: Wikipedia, www.royalparks.org.uk

Another Christmas morning tradition in London is the famous Peter Pan Cup. A bunch of swimmers brave the freezing waters of Serpentine Lake and take a swim to proclaim the cup. This competition got its name in 1903 from the writer of Peter Pan, JM Barrie, who was a member of the swimming club and had participated in the annual event.
Source: BBC, Image: s0.geograph.org.uk

The Victoria Cross is the most distinguished and reputable award in the British Honors System. It is awarded to the members of the British Armed Forces. The first ceremony was held in Hyde Park on June 26, 1857, and Queen Victoria had herself presented 62 medals during the parade.
Source: Wikipedia, Image: Wikimedia

17. A Stroll in Rose Garden

The Rose Garden designed by Colvin and Moggridge is located in the South-East corner of Hyde Park. It is a delightful display of seasonal flower beds with rose and herbaceous plantings. The garden offers the most spectacular view almost throughout the year, and it is a sight to behold especially during early summers.
Source: royalparks.org.uk, Image: Flickr

Hyde Park Tennis and Sports Centre is operated by Will to Win Ltd. Located at the junction between South Carriage and West Carriage Drive, they have been operating since 2003, and offer a pay & play, no membership required sports center, open for all ages. They have six newly surfaced floodlit tennis courts, a six-rink lawn bowling green, a nine-hole putting green, a multi-use games area and a padel court, as well as a wonderful cafe and superior changing facilities.
Source: willtowin.co.uk,royalparks.org.uk, Image: Flickr

Hyde Park was also once an unofficial site for a pet cemetery, which was not very publicized. It was started in the year 1881 when some friends of the gatekeeper had buried their dog in his garden. Over the years, the gatekeeper donated more and more of his garden for the pet cemetery. It was closed in the year 1903 and by that time 300 pets had been buried under those grounds. In 1967, there was a special burial of the Royal Marines mascot dog, Prince.
Source: Wikipedia, telegraph.co.uk Image: Flickr

Hyde Park was host to the Great Exhibition of 1851 also known as the Crystal Palace Exhibition. This was organized under the guidance of Prince Albert and members of the Royal Society for the Encouragement of Arts, Manufactures and Commerce. The building was in the form of an enormous glasshouse that incorporated many of the park’s trees under its roof.
Source: britannica.com, Image: Wikimedia

Visitors can not only enjoy the splendor and beauty of Hyde Park while taking a stroll but can also indulge in some delectable cuisines. Hyde Park has a range of cafes, restaurants, and kiosks within its premises offering everything from snacks and drinks to full three-course meals.
Source: royalparks.org.uk, Image: Flickr

Shukla Sundeep - June 24, 2016
0
Did you know the word igloo translates to "house" and can be used for houses made up of any material? Stereotypical-ly, igloo is associated...