Adolf Hitler- a name which brings all the nitty-gritty’s about the World War II and sums up the Holocaust. In the modern history, nobody stands on the same stage as Adolf Hitler in terms of inhumanity and barbaric activities he put the world through. The Nazi dictator- Adolf Hitler alone was responsible for the blood of 6 million Jewish people and millions other who died during the Second World War. All this is history we study in school but let’s know more about the man who single-handedly put the world through a second brutal war. Let’s explore some interesting facts about Adolf Hitler: 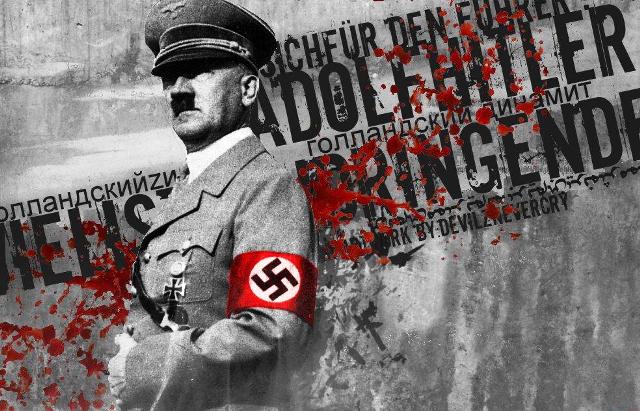 The name “Adolph” means “noble wolf” (we all know how Hitler lived up to his name). His headquarters were also named “Wolf’s Lair” and “Wolf’s Headquarters” and he called his beloved German Shepherd “Wolf.”
Source: wikipedia, image: wikimedia.org

Hitler was head over heels in love with a Jewish girl- Stefanie Isak when he was 16. The love story didn’t conspire because Hitler lacked the courage to talk to her, though he planned to kidnap and jump with her to their deaths.
Source: thecrazyfacts.com 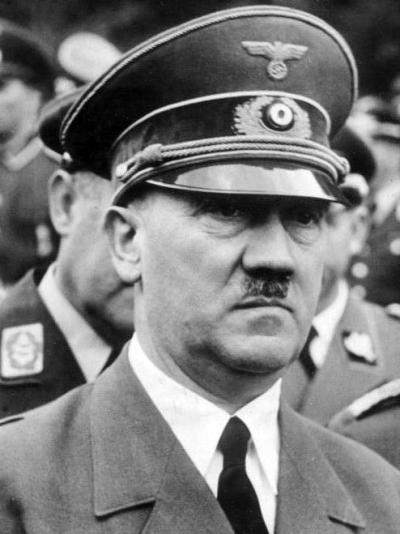 Do you know the iconic mustache Hitler wore half his life was a result of an accident? During the First World War Hitler was ordered by his superiors to remove his mustache after he almost died in a mustard- gas attack. Instead of removing he trimmed it to the toothbrush-shaped style due to his love of Charlie Chaplin.
Source: wikipedia, image: wikimedia.org

4. Hitler Spied On the Nazi Party 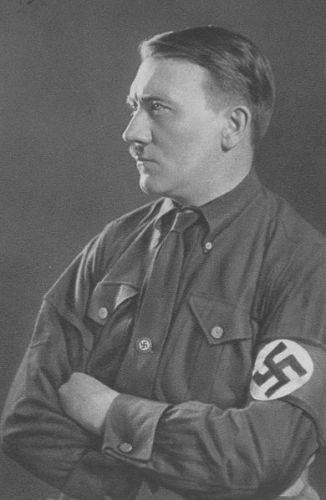 Interestingly, Hitler used to spy on the Nazi party before joining it. He was given the task of infiltrating the German Workers’ Party (DAP), but unfortunately, he switched allegiances after attending a few meetings. Hitler soon figured that anti-Semitic, nationalist and anti-Marxist views of the leader Anton Drexler were similar to his and became a part of the Party.
Source: whataculture.com, image: wikimedia.org

Hitler had put together the first vigorous anti-smoking campaign in the world during late 1930’s and early 1940’s. Nazi scientists became the first to establish that smoking leads to lung cancer. Hence, an anti-tobacco campaign to ban smoking and raise tobacco tax was started. And despite his apathy towards human life, he loved animals and was a vegetarian. He even passed laws to ban animal cruelty.
Source: metro.co.uk, image: wikimedia.org

We all know about Hitler’s autobiography- Mein Kampf but what we don’t know is that almost all the profit from the sale of his book, his images, and his artwork are suppose to go to charity. All rights are owned by Bavaria who has a difficult time finding a cause.
Source: fpp.co.uk, image: flickr

7. I want to see my oratory expressions!

It is a well-known fact that Hitler had almost hypnotic oratory but did you know that the megalomaniac supreme, Hitler so self-obsessed, wanted to see how bad-ass he looked while delivering his speeches that he made photographer Heinrich Hoffman take photos of him delivering speeches.
Source: history.co.uk, image: wikimedia.org

We all are well aware of Hitler’s hatred for the Jews, but apparently, he was a little biased too. There was a Jewish doctor in Austria who once did not charge Hitler’s family for services, and in return Hitler saved him from the atrocities committed against Jews during the World War II, calling him a “noble Jew.”
Source: allday.com 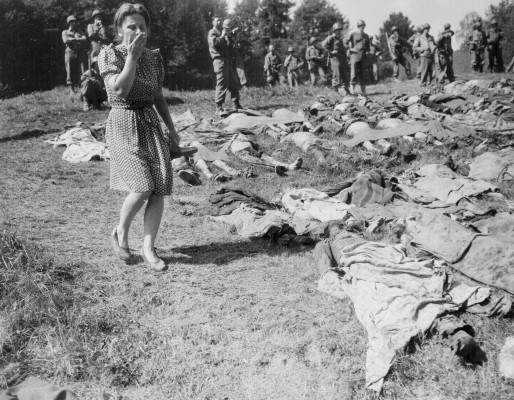 As evil and horrific as it might sound, but Hitler was actually planning to collect thousands of Jewish artifacts which were suppose to be displayed as a trophy of archaeological remains after the Holocaust. He planned to build a “Museum of An Extinct Race.”
Source: independent.co.uk, image: wikimedia.org 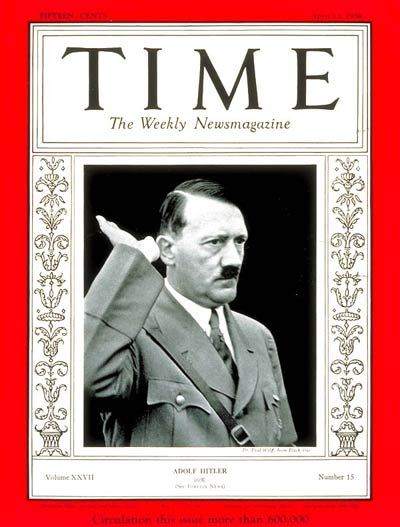 Time Magazine in 1938 made Hitler the “Man of the Year” intending to shed some light on his negative deeds. He was also nominated for the Nobel peace prize in 1939, although he didn’t win it.
Source: allday.com, image: iloveuselessknowledge.com

Hitler fashioned his own German National Prize for Art and Science after banning the Nobel Prize and bestowed one to Ferdinand Porsche, developer of the world’s first hybrid car, and the Volkswagen Beetle.
Source: theguardian.com, image: wikimedia.org

12. Hitler was a spendthrift

Biographer Volker Ullrich recently discovered that Hitler apart from being out of control, in general, was an out of control spender too. He used to spend lavishly on luxuries like cars, champagne, clothes, etc. while feigning to be “a man of the people.”
Source: history.co.uk, image: wikimedia.org 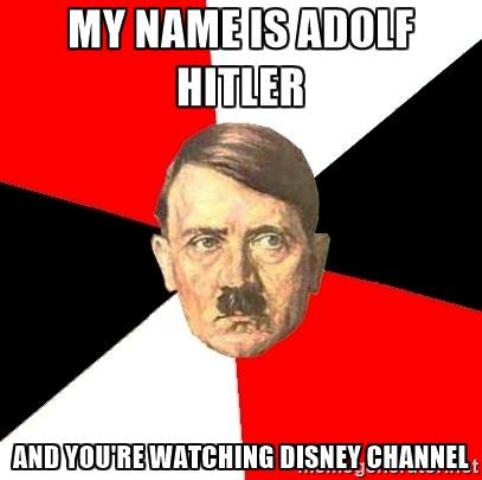 Yes! You read that right; this brutal man had a soft corner for Disney cartoons. But unlike us normal folks for whom Disney stands for kids and family, it represented technological advancement to the dictator. It is said that Hitler loved “King Kong” because of its special effects, and repeatedly watched it.
Source: history.co.uk, image: meme.am 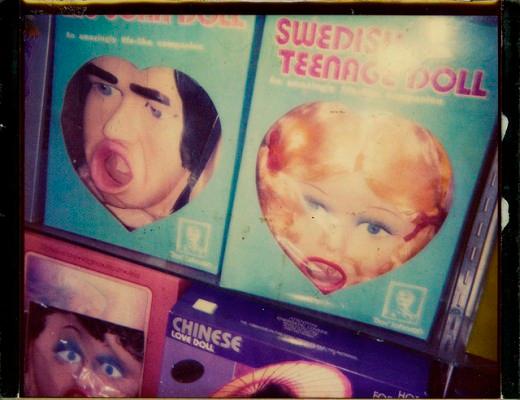 Don’t be surprised. Yes, he basically invented them but for a very logical reason. Hitler wanted to protect his soldiers from Syphilis which was a prevalent disease at that time. It used to spread because of sexual encounters, so blow-up dolls helped to keep them away from the French prostitutes.
Source: thecrazyfacts.com, image: thecrazyfacts.com

15. Nazi leader had only one ball

Hitler was severely injured in the abdomen and lost one testicle at the Battle of the Somme in 1916. A German medic who assigned him the nickname “screamer” saved his life.
Source: telegraph.co.uk, image: wikimedia.org

That’s right; Hitler was a drug addict, Cocaine to be specific. It was prescribed to him by his physician, but later he became so addicted to the drug that he took it twice a day through an inhaler and also used cocaine eye-drops. Strangely, cocaine is not the only noteworthy “drug” Hitler took. Rumor has it; he would also take bull testicle extract to improve his diminishing libido.
Source: thecrazyfacts.com, image: flickr

Hitler once conspired to murder Sir Winston Churchill with the help of exploding chocolate. The explosive device was to be covered with a thin layer of dark chocolate and wrapped in black and gold paper. But as we all know, it didn’t happen.
Source: facts.randomhistory.com 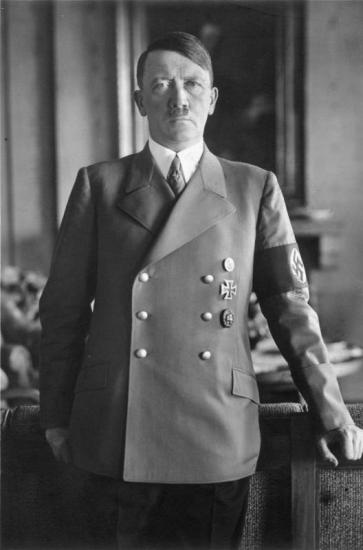 There are perks (negative obviously) to being the most hated man in the history. There were more than 40 failed attempts to kill Hitler. Even his administration wanted to murder him. Thinking what happened to those who made an effort? They ended up losing their lives while Hitler lived.
Source: rlsbb.com, image: wikimedia.org

Though not his first, Eva Braun was certainly Hitler’s last love. They had a long relationship after they met in Munich. Hitler and Eva Braun got married in 1945 and committed suicide 36 hours later. Braun was 33 years old. Hitler was 56.
Source: facts.randomhistory.com, image: wikimedia.org

As we all know, the dictator’s immediate legacy was dramatic and included the Cold War, a split Germany, the Iron Curtain, nuclear weapons, and moral trauma.
Source: facts.randomhistory.com

Krishna - February 17, 2017
0
One of China’s most eternally popular holiday destinations, Hangzhou is famous for its natural beauty and historical heritage. Located at the head of Hangzhou...

14 Fascinating Facts About Burj Khalifa You Should Know