The longest continental mountain range in the world (and also one of the highest), the Andes sweep down the spine of Ecuador setting the stage for serious adventures such as mountaineering and adrenalin-charged mountain biking, as well as rather more pastoral pursuits like hiking or a visit to a rose farm. Let us know some interesting facts about Andes Mountain Range. 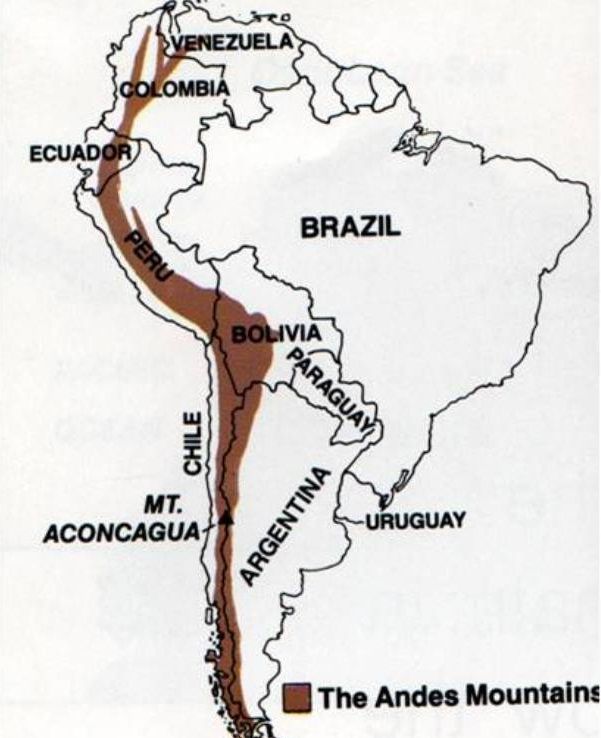 It is the longest continental mountain range in the world. This range is about 7,000 km  (4,300 mi) long. It spans from North to South through seven South American countries:  Venezuela, Colombia, Ecuador, Peru, Bolivia, Argentina and Chile.
source: Wikipedia, image: honalu.files.wordpress.com

The Andes are the location of several high plateaus. The Altiplano plateau is the World’s second-highest after the Tibetan plateau.
source: Wikipedia, image: bolivie.svetadily.cz

Some historians believe the name Andes comes from the Quechan word anti (“east”); others suggest it is derived from the Quechan anta (“copper”). It perhaps is more reasonable to ascribe it to the anta of the older Aymara language, which connotes copper color.
source: britannica.com

4. Aiming For the Skies

Because the Andes act as a large wall between the Pacific Ocean and the continent, they have a tremendous impact on climate in the region. The northern part of the Andes is typically rainy and warm. To the west, the dry climate is dominated by the Atacama Desert.
source: livescience.com, image: www.explora.com

The Andes Mountains are home to many birds like Flamingo, Andean Flicker, the Condor, and the Hill star Hummingbird. Fauna includes Mountain Lion, the Red Perll, and Llamas. The Spectacled Bear also lives in this biome. The Giant Toad and Andean Iguana are some examples of reptiles. This Iguana is one of the few lizards found in that cold climate.
source: blueplanetbiomes.org, image: upload.wikimedia.org, image: quorneshaanauelvirgo.files.wordpress.com

The Andes is one of the most popular natural wonders in the South America, attracting millions of visitors every year, from all around the world.
source: mapsofworld.com

8. What! World’s Highest Volcano is Here

The Andes are also home to the world’s highest volcano when measured above sea level, Ojos Del Salado on the Chile-Argentina border, which reaches 22,615 feet (6,893 m).
source: livescience.com, image: thai7summits.com

9. Farthest From the Earth’s Centre

The peak of Chimborazo in the Ecuadorean Andes is farther from the Earth’s center than any other location on the Earth’s surface. Mount Chimborazo is an inactive volcano in Ecuador, which last erupted over a thousand years ago.
source: Wikipedia

10. Not Just A Single Chain

The Andes are not just a single chain of mountains. They are made of several parallel chains that unite, from place to place, in orographic knots or depart one from another, forming high plateaus between them.
source: news.softpedia.com

Andes Mountains make up the highest mountain range outside Asia. The highest peak of the mountain range is Aconcagua, which rises to a height of 6,962 m (22,841 ft) above sea level.
source: iloveindia.com, image: images.summitpost.org

The islands of Aruba, Bonaire, and Curacao, situated in the Caribbean Sea – off the coast of Venezuela, are nothing but the submerged peaks of the extreme northern edge of Andes Mountains.
source: lifestyle.iloveindia.com, image: hotpot.se

13. Exporters of Copper in the World!

In the Atacama region of Andes, copper mineralization occurs making Chile and Peru the first and second largest exporters of copper in the world.
source: thefreeresource.com

14. Origin of Potato and Tomato

You should know that two of the most important crops of the world, potato and tomato, originated both for the first time in the Andes Mountains!
source: news.softpedia.com

Andes are the result of the head-on collision between two tectonic plates, one (Nazca plate of the Pacific) being driven by subduction areas and buried underneath the South American plate into the Earth’s mantle. The collision occurred 50 million years ago.
source: news.softpedia.com

Uruguayan Air Force Flight 571 was a chartered flight carrying 45 people, including a rugby union team, their friends, family and associates, that crashed in the Andes on 13 October 1972, in an incident known as the Andes flight disaster and as the Miracle of the Andes. In that accident, 16 survivors were rescued on 23 December 1972, more than two months after the crash. The survivors had little food and no source of heat in the harsh conditions at over 3,600 meters (11,800 ft) altitude. Faced with starvation and radio news reports that the search for them had been abandoned, the survivors fed on the bodies of dead passengers that had been preserved in the snow. Rescuers did not know of survivors until 72 days after the crash when passengers Nando Parrado and Roberto Canessa found Chilean arriero Sergio Catalán, who gave them food and then alerted the authorities to the existence of the other survivors.
source: Wikipedia, image: cdn3.list25.com, image: i.dailymail.co.uk

There are large deposits of Coal, oil and natural gas, iron ore, gold, silver, tin, copper, phosphates and nitrates and Bauxite within the Andes Mountains. The Yanacocha gold mine in Peru is the largest gold mine in the world.
source: prezi.com

18. Have a Visit through Andes