Known as the People’s President-  A.P.J. Abdul Kalam is undoubtedly the most inspiring figure to the people of India. This youth icon is also popularly known as the Missile Man because of his countless contributions- the development of India’s first Satellite Launch Vehicle, SLV-III, which put the Rohini Satellite in the near earth orbit in July 1980, making India a member of the Space Club, and much more. Here are some interesting facts about A.P.J. Abdul Kalam: 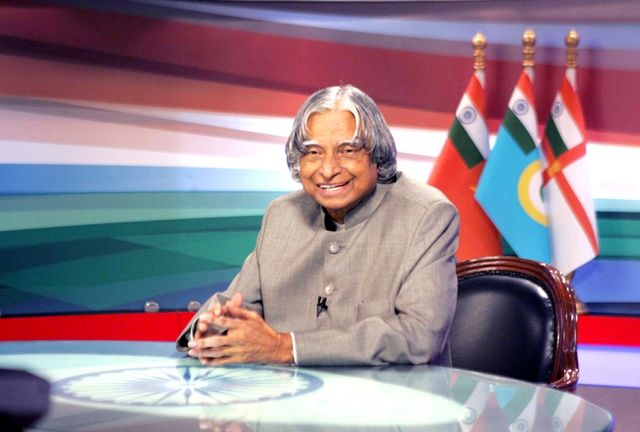 1. Born To A Poor Boatowner! 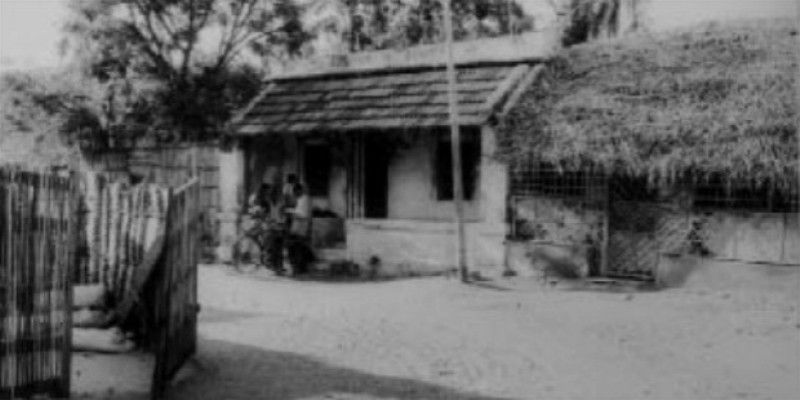 Avul Pakir Jainulabdeen Abdul Kalam was born on 15 October 1931 at the pilgrimage center of Rameswaram, Tamil Nadu, in a Tamil Muslim family. His father, Jainulabudeen, was a boat owner, and his mother, Ashiamma, was a housewife. Kalam was the youngest of their 5 children.
Source: Wikipedia, Image: successstory.com 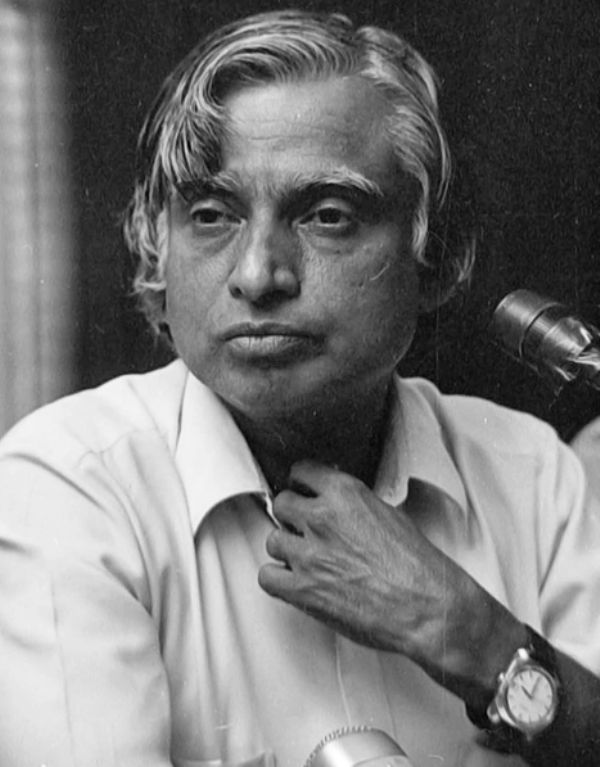 During the IInd World War, he was ten years old, and he described in an interview that he felt the travesty of war as the war had almost reached the doors of Rameswaram. Those were the difficult times, he explained further.
source: abdulkalam.com, Image: hindustantimes.com 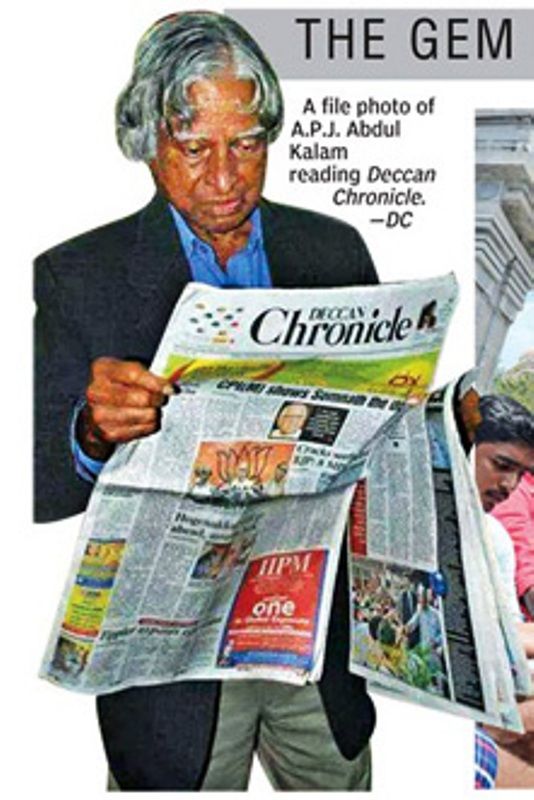 In his childhood, he used to collect newspapers thrown out of the Dhanush Kodi Mail train and become the first one to distribute them to the town of Rameswaram.
source: abdulkalam.com, Image: amazonaws.com

4. The Institutions Behind His Scientific Temper 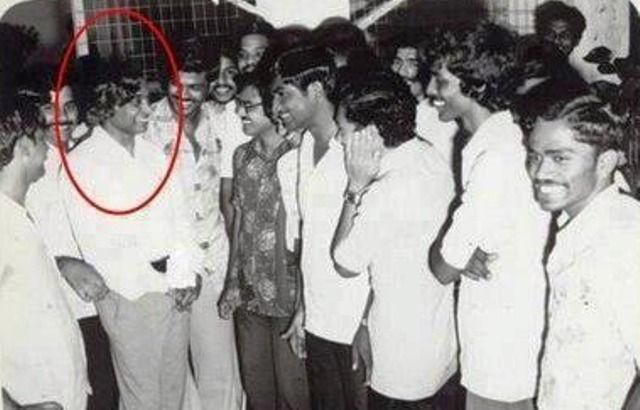 Kalam did his schooling from the Ramanathapuram Schwartz Matriculation School, and Saint Joseph’s College, Tiruchirappalli. In 1954, he completed his graduation in physics from the University of Madras and studied aerospace engineering at Madras Institute of Technology.
Source: Wikipedia, Image: images.iimg.in

5. Raised In A Poor Financial Condition

His early childhood was difficult because of the poor financial condition of his family. So, to support them, Kalam used to distribute newspapers in early mornings. There was a time in his school days when he didn’t have enough money to pay the fees.
Source: Wikipedia 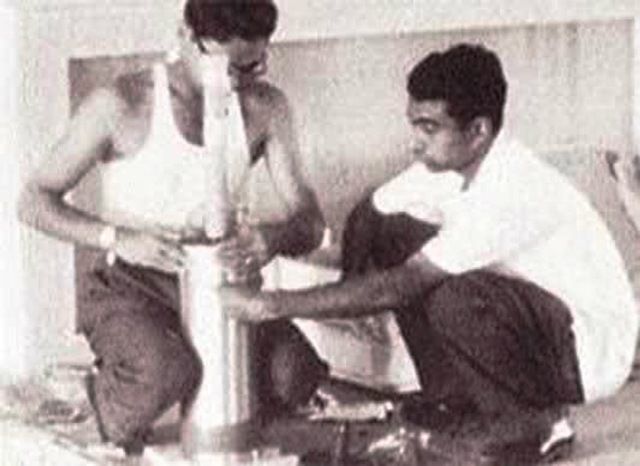 He was a very quick learner and was quite enthusiastic at his studies. He was appreciated by the fellow students and the mentors for his diligent work at the Thumba Space Center.
source: dynamiccio.com, Image: dynamiccio.com 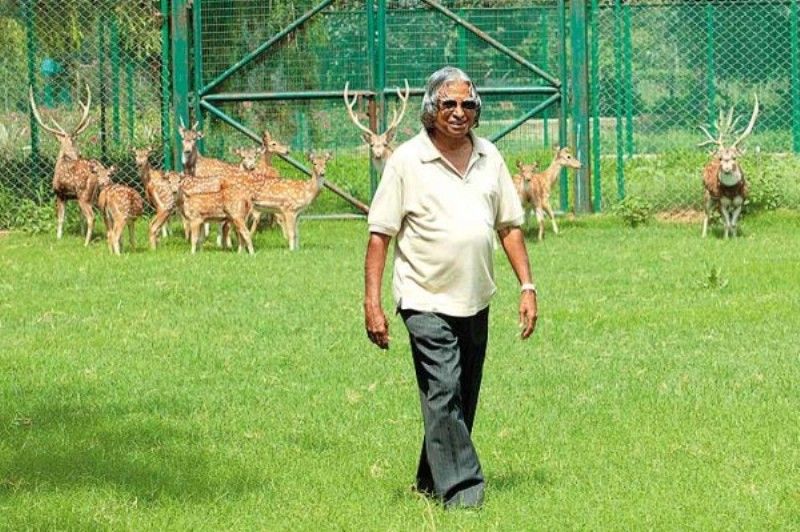 He used to see things with the glass of kindness. When he was in DRDO, he ordered not to put broken glass on the wall for its protection as it will harm birds.
Source: oneindia.com, Image: awaaznation.com 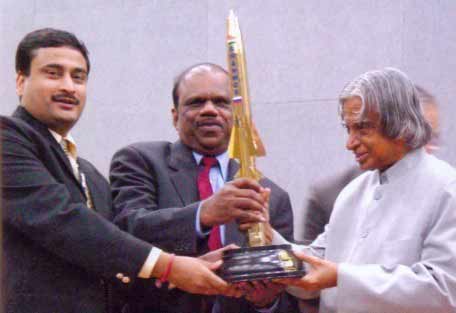 Kalam has been given the sobriquet- Missile Man of India and here are the reasons:
– he was the think tank behind India’s first indigenous Satellite Launch Vehicle (SLV-III).
– he was the Project Director of India’s first satellite ‘Rohini.’
– when in DRDO, he was the chief of the Integrated Guided Missile Development Program and developed 5 missiles: Nag, Akash, Trishul, Agni, Prithvi.
– he was the backbone of the operation and development of Prithvi and Agni missiles and also designing indigenous weapons by bringing together various institutions.
-he led to the formation of BrahMos Aerospace between Russia and India.
Source: oneindia.com, Image: idrw.org 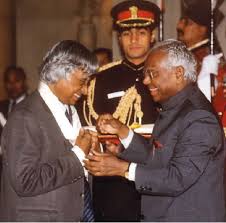 In 1997, Kalam was honored with the Bharat Ratna, the highest civilian award of the Republic of India, by K. R. Narayanan who was the then President of India.
Source: Wikipedia, Image: colorlibrary.blogspot.com 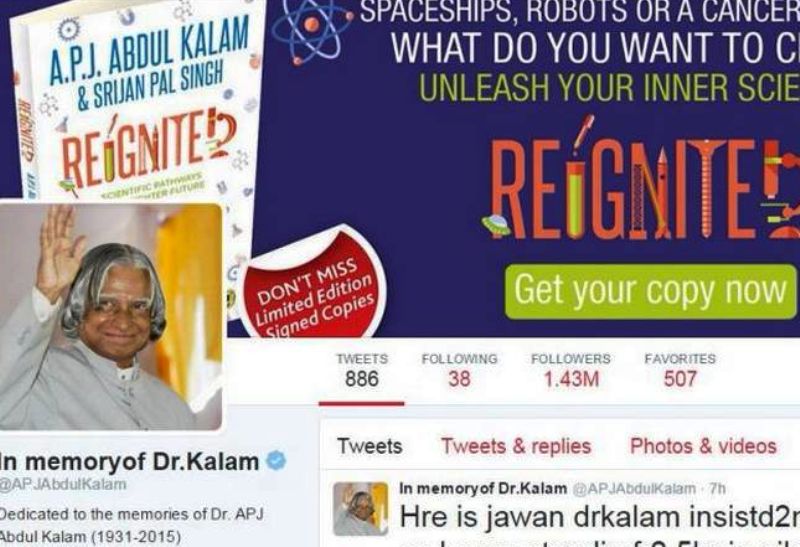 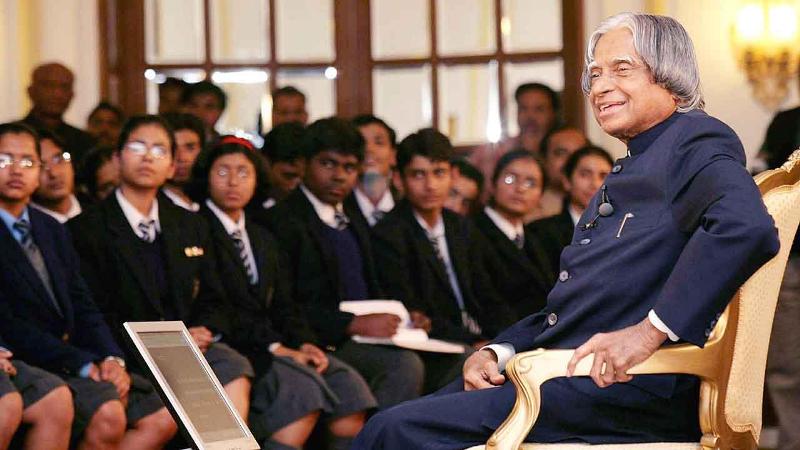 After becoming the President of India in 2002, he was supposed to address students at a school function. But when he reached there to start his speech, the electricity suddenly went off. Instead of complaining, he asked the students to gather around to listen to him.
Source: oneindia.com, Image: b.cfcdn.com

12. A Secular Who Loved Playing Veena! 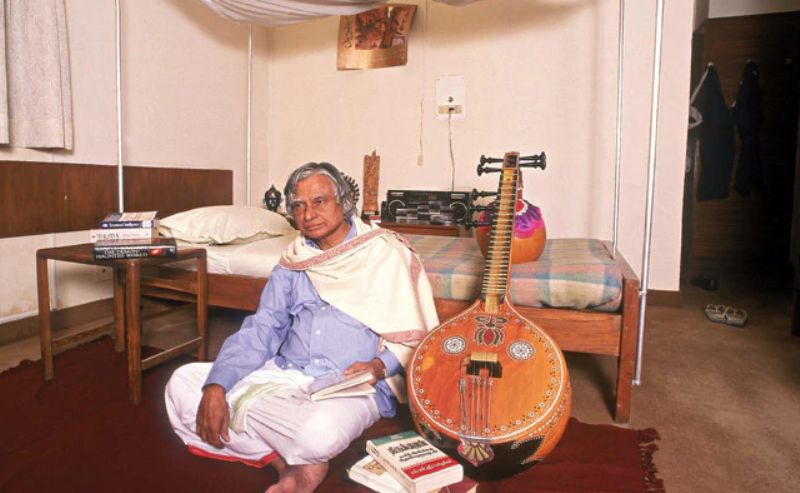 Although he was a Muslim, he used to read both Bhagavad Gita and Quran and along with that; he was an expert in playing Veena.
Source: oneindia.com, Image: tosshub.com 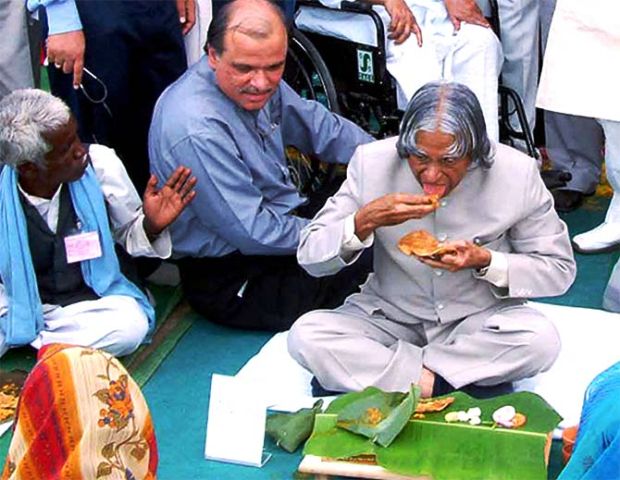 Kalam was a vegetarian and was very fond of his mother’s cooked food, such as rice and sambar with coconut chutney, Vendhya Kozhambu, and Puliyodare.
Source: food.ndtv.com, Image: rediff.com

When he was at ISRO, there was a period when his team faced a series of failures of tests; he accepted it as his mistake. But on huge successes, he couldn’t be seen taking credits, instead, sent his fellow scientists to talk to the press.
Source: businessinsider.in 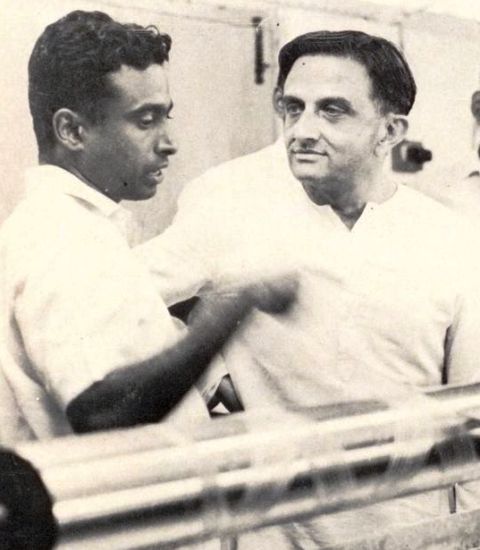 Dr. Vikram Sarabhai, an Indian physicist and the father of India’s space program was his mentor and guide. Apart from him, he was also inspired by Professor Satish Dhawan and Dr. Brahm Prakash.
Source: dailyo.in, Image: s-media-cache-ak0.pinimg.com

16. A Writer Who Inspired A Generation 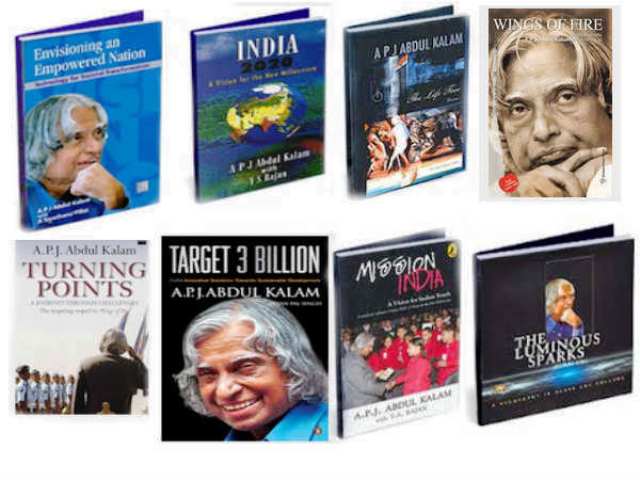 He has written many inspirational books, such as- Wings of Fire, India 2020: A Vision for the New Millennium, The Luminous Sparks, Guiding Souls: Dialogues on the Purpose of Life, Ignited Minds: Unleashing the Power Within India, Inspiring Thoughts, A Manifesto for Change, etc.
Source: Wikipedia, Image: cloudfront.net

17. A Harbinger Of Noble Causes

When he was the president of India, he used to donate all his savings for the social cause to ‘PURA’ (Providing Urban Amenities in Rural Areas)- a strategy for rural development in India.
Source: oneindia.com

There were two incidents when he declined to sit on a special chair as he didn’t want to make himself superior to others.
Source: catchnews.com, Video: YouTube

19. When The United States Apologized Him!

The United States made an apology to him for not following the appropriate procedures for expedited screening of dignitaries when he was frisked at the JFK airport on 29 September 2011.
Source: viralchronics.com

20. Smiled When Death Stared At Him

Look at his positivity! In 2001, when he had boarded the helicopter from Ranchi, on the way to Bokaro, he was informed about some issues with the helicopter’s rotor. Though it was a death alarm for the cockpit crew, he composed everyone with his signature smile and advised the two pilots not to worry.
Source: quora.com

21. An Advocate Against The Death Penalty

Throughout his life, he supported the abolition of the death penalty saying that as President of India he felt pain in deciding mercy petitions of death row convicts.
Source: indianexpress.com

23. The Only Bachelor President of India!

He is the only unmarried President of India so far.
Source: Wikipedia 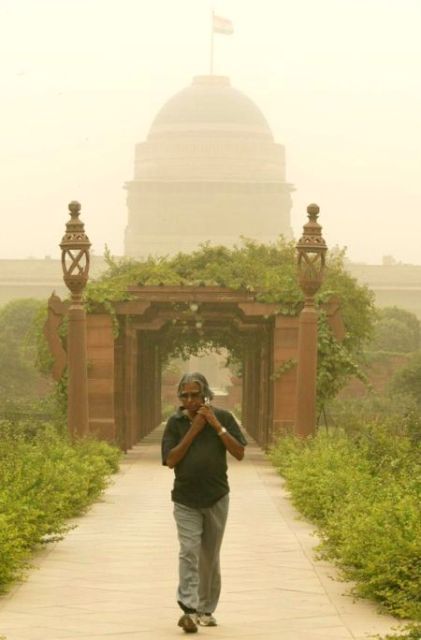 Throughout his life, he led a simple life even after reaching to the highest post in the country. In fact, he is considered the symbol of simplicity in India. He came to the Rashtrapati Bhavan with a suitcase and left with the same.
Source: economictimes.indiatimes.com, Image: rediff.com 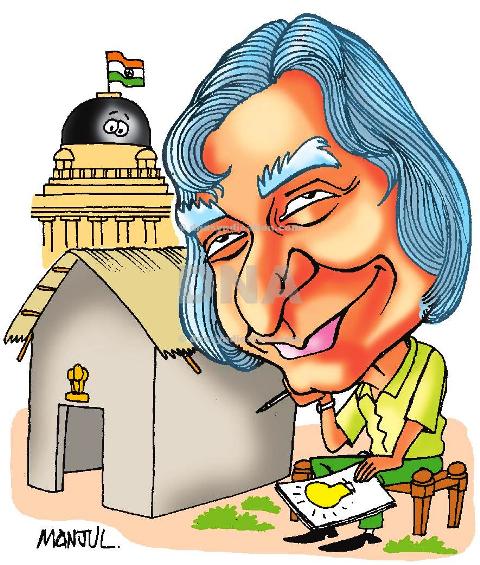 He installed a Manipuri style hut at the Rashtrapati Bhavan during his tenure as the President of India from 2002 to 2007. He used to sit there in the mornings and evenings and fondly referred to it as- “Thinking Hut.” The hut was demolished after he left the President House to restore the original character of Edwin Lutyens.
source: economictimes.indiatimes.com, image: dnasyndication.com 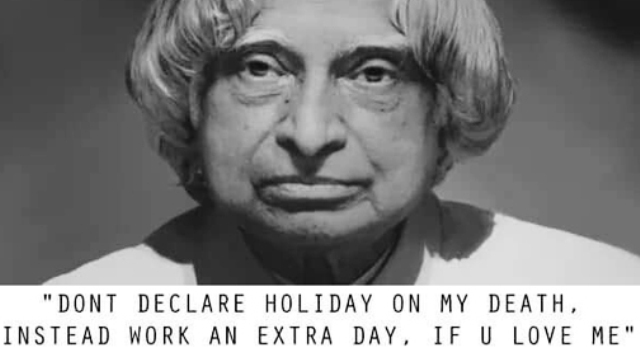 He dedicated every single minute of his life serving the country which is justified by the fact that even few minuted before his demise on 27 July 2015, he was delivering a lecture at the Indian Institute of Management Shillong.
source: Wikipedia, Image: thenortheasttoday.com

Keerti - February 19, 2019
0
Many good people have said, "Staying happy is the key to be happy." A place where the reality might meet expectation, dreams might come...