The largest animals ever known to have lived on Earth, Blue whales are the magnificent marine mammals that rule the oceans. Besides being gigantic in size, Blue Whales have many other aspects worth knowing. Let’s dive into the marine world to explore some interesting facts about Blue Whale:

Of the creatures that have inhabited the Earth, Blue Whales are the largest. One of the largest known dinosaurs- the Argentinosaurus, estimated to have weighed up to 90 tonnes, Amphicoelias fragillimus, at 122.4 tonnes is still lighter than the largest Blue Whales.
Source: Wikipedia, Image: wikimedia.org 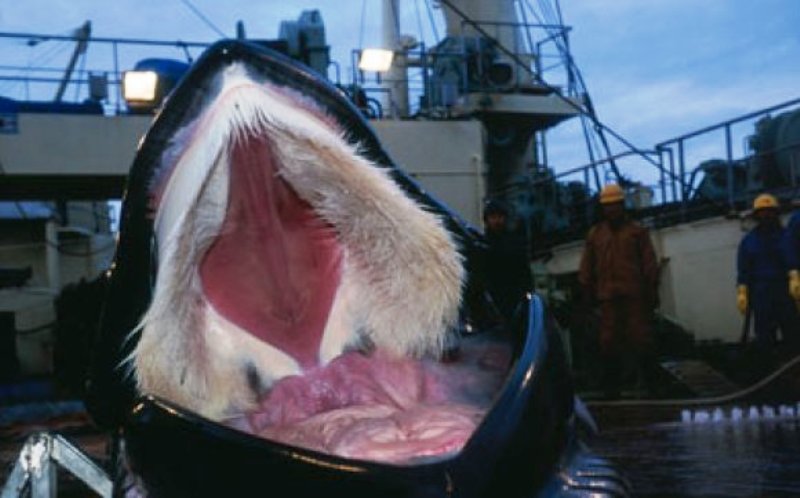 One can understand that since the animal is large, the organs would be jumbo too. The tongue of a Blue Whale weighs little short of three tons (as much as an elephant) whereas, its mouth is large enough to accommodate 90 tonnes of foods.
Source: Wikipedia, Image: sabiasesto.com

3. A Giant Predator but a tiny Prey! 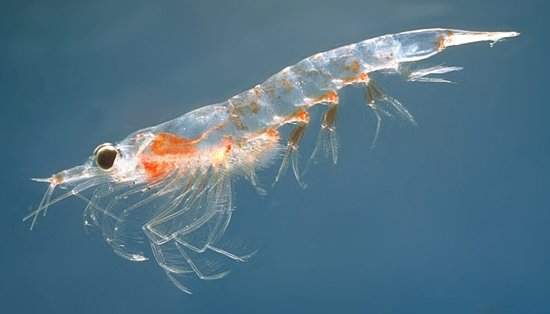 Here’s a bummer, despite being so massive, Blue Whales eat just krill or Copepods in small numbers. An adult can eat an estimated number of 40 million krill in a single day. Not only this, they like to feed at 100m depth during the day, but during the night they feed at the surface.
Source: Wikipedia, Image: wikimedia.org

Whales communicate through whale sounds, but there is a mystery behind this. The purpose for which whales make calls is yet uncertain. They could be used to locate prey, warn others of danger, maintain a distance between each other, mating and for recognition. Blue Whales, off the coast of Sri Lanka, are unique in this regard. They have been recorded making “songs” of four notes, for about 2 minutes each- a phenomenon that has not been seen in any other creature.
Source: Wikipedia, Image: i.ytimg.com

The Baby Whales weigh around 5 to 7.5 tonnes (2,7000 kg) and up to 8m long. They stay with their mothers for one year or until they reach a length of 13m. They reach maturity when they are 10-15 yrs old. Baby Whales drink more than 600 liters of milk every day.
Source: us.whales.org, Image: wikimedia.org

The Blue Whales are said to have evolved from hippopotamuses. Whales developed streamlined shape responsible for graceful movement into the water.
Source: softschools.com, Image: wikimedia.org 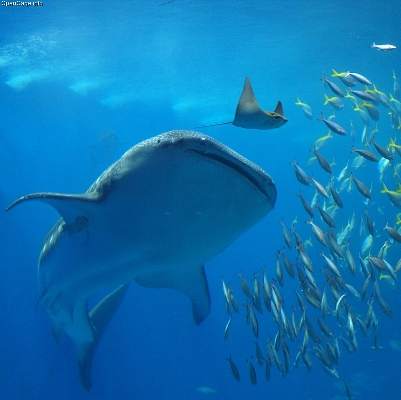 Blue Whales do not possess teeth. Their jaws are powerful and contain bristles. Whales swim to where Krills are present in huge numbers and just swallow them along with water. The water is spat out with tongue while the krill is stuck in the bristles. Once the water is completely removed, Whales swallow the prey wholly.
Source: whalefacts.org, Image: opencage.info 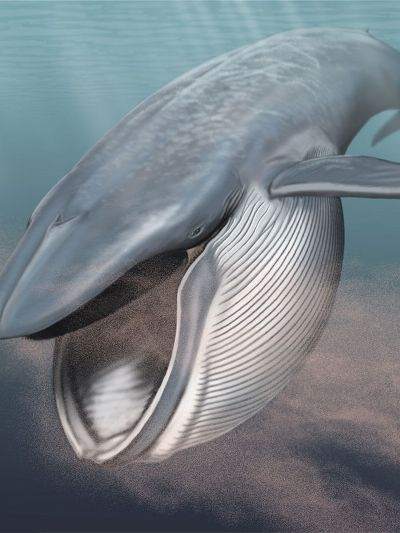 Even though Whales are large creatures, they can digest only a small amount of food at a time. It’s because they have a narrow esophagus. Without teeth, it’s not possible for the Blue Whales to break food into smaller pieces.
Source: whalefacts.org, Image: abc.net.au

Though it’s difficult to hear Blue Whales, they actually are one of the loudest animals on Earth. Whales communicate through a series of low-frequency pulses, groans, and moans. It is believed that they can hear each other over a distance of up to 1,600 kilometers.
Source: whalefacts.org

A Blue Whale undergoes a pregnancy period of 10-12 months, which ends with the birth of a single offspring. Females tend to outgrow males when they reach maturity. A fertile female can have offsprings at the intervals of 2-3 years.
Source: whalefacts.org 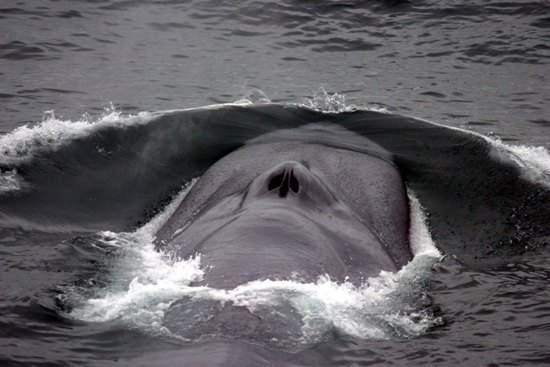 Shocking right? Blue Whales do not possess gills. It means they cannot extract oxygen from water to breath. A blowhole is located on top of their head and is used for sucking in large amounts of air when it swims to the surface. Unlike other species, a Blue Whale has two instead of one blowhole. They can hold their breaths up to 35 minutes underwater.
Source: whalefacts.org, Image: wikimedia.org

When it’s the feeding season, krills tend to move towards cold waters. The Whales too tend to move there and feed on the krills. When mating season begins, they move to tropical waters. These trips of migration could involve traveling thousands of miles. During the feeding season, Blue Whales will eat and stock up extra fat to form blubber. It helps them survive the migration period.
Source: whalefacts.org 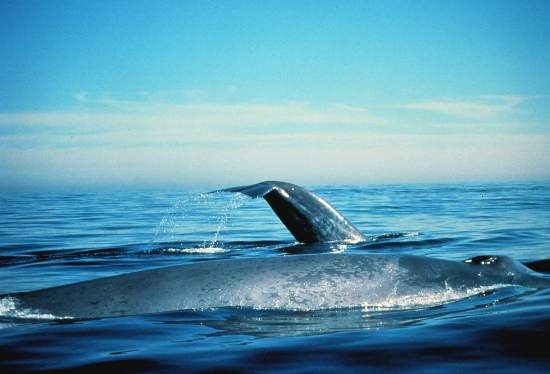 Blue Whales look mottled gray over the surface. When underwater they appear solidly blue. Microorganisms live in the skin of their bellies. It gives a yellowish coloration to the belly.
Source: whalefacts.org, Image: Flickr

Blue Whales tend to breach (jump high) and land on water. A sign to communicate nearby danger.
Source:defenders.org 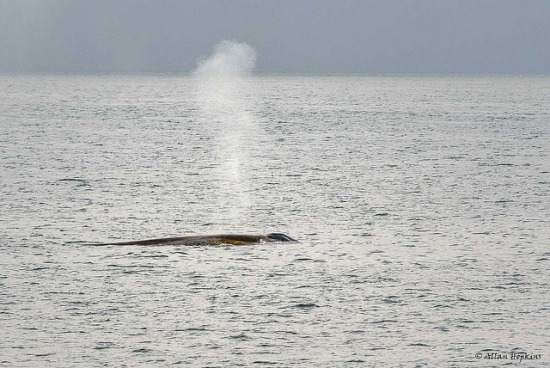 Well, till date, several movies have shown Whales spout a jet of water through their blowhole. It’s not phony, but Whales do not blow water out. They simply exhale air warmer than the temperature of the waters on the surface, which leads to quick condensation. It’s what makes it appear as though the Whale is spraying a whole lot of water. There is mucus mixed too.
Source: todayifoundout.com, Image: Flickr

Blue Whales can hold their breath for a long time. Several factors help to make this possible. 90 percent of the inhaled oxygen is made use of by the mammal. In addition to that, the capacity of the lungs is approximated at 5000 liters. The Blue Whale can hunt for long inside. As stated earlier, the breathing tract and food tract are different. It makes it all the more convenient to hold the breath and catch their prey.
Source: todayifoundout.com 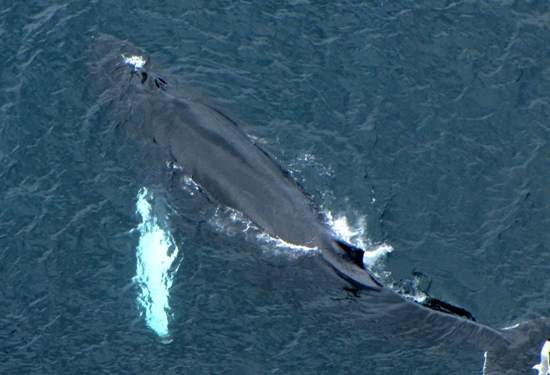 Blowholes function similar to nostrils. Blue Whales have two blowholes located on the left and right side of the head. So, it is pretty much like humans who breathe through one nostril for most of the time.
Source: todayifoundout.com, Image: wikimedia.org 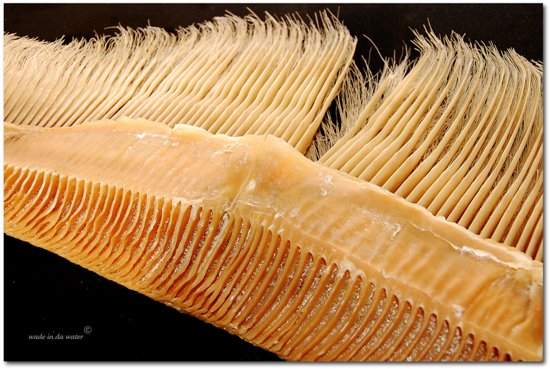 Blue whales possess longitudinal pleats. These pleats can expand to allow the mammal to take in an enormous quantity of water with the prey in it. This water is expelled, and the prey is then swallowed. As many as 55-68 pleats can be seen, and they run all the way to the belly button. One can expect the mouth to expand 6 times.
Source: coolantarctica.com, Image: wikimedia.org

19. At the Brink of Extinction 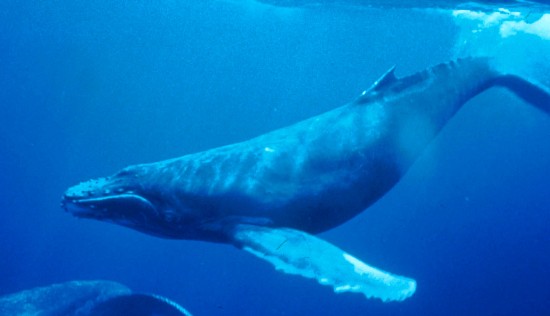 Before the whaling era, Blue Whales were considered apex predators and did not feel any threat. In the era when Whales were hunted, their populations declined rapidly as their oil was sold commercially. As the numbers declined, laws were framed against whaling. Blue Whales have now been listed as a protected species.
Source: whalefacts.org, Image: wikimedia.org

Blue Whales swallow half a million calories in a single mouthful.
Source: livescience.com

Shukla Sundeep - June 30, 2016
0
Brooklyn bridge, also called as the 8th wonder of the world, was built "to bridge" the gap between the two city hall's of Manhattan...