Standing with arms wide open on Corcovado Mountain, this attention-grabbing masterpiece wonder of the world is in Rio de Janeiro, Brazil, which keeps on watching the view of this scintillating city. Constructed from concrete, this statue of Jesus Christ attains a mighty height of 125 ft or 38 m that makes you feel as if Jesus is always there for you. Let’s find out some interesting facts about Christ the Redeemer:

Although it seems like a less endeavoring task, in reality, it wasn’t. It took around 9 years from 1922-1931 to make this grand statue; mainly due to its cliff-like location.
Source: Wikipedia, Image: Wikimedia

2. Its First Proposal was Rejected!

A local priest, Pedro Maria Boss in the 1850’s, presented this thought in front of the finance department. However, the idea was rejected; as the idea behind its construction was found less feasible.
Source: brazilcultureandtravel.com

3. Finally, its Proposal was Accepted

The thought of creating it was halted in the 1850s, but as good thoughts can never die, the proposal of creating it got erupted by the Catholic Circle of Rio. By carrying the financial and moral support of the local people, the proposal was accepted.
Source: brazilcultureandtravel.com, Image: picryl.com

4. The Third Tallest Statue of the Almighty Jesus!

It is the 3rd tallest statue of Jesus in the world after Poland’s Christ the King and Bolivia’s Cristo de la Concordia.
Source: thejesusquestion.org, GIF: giphy.com

5. What Does it Symbolize?

The statue was made with the purpose to show that Christ loves all, spread peace, and to display the devotion of the city towards the almighty.
Source: brazilcultureandtravel.com, Video: Vimeo

6. Made with a Special Kind of Stone 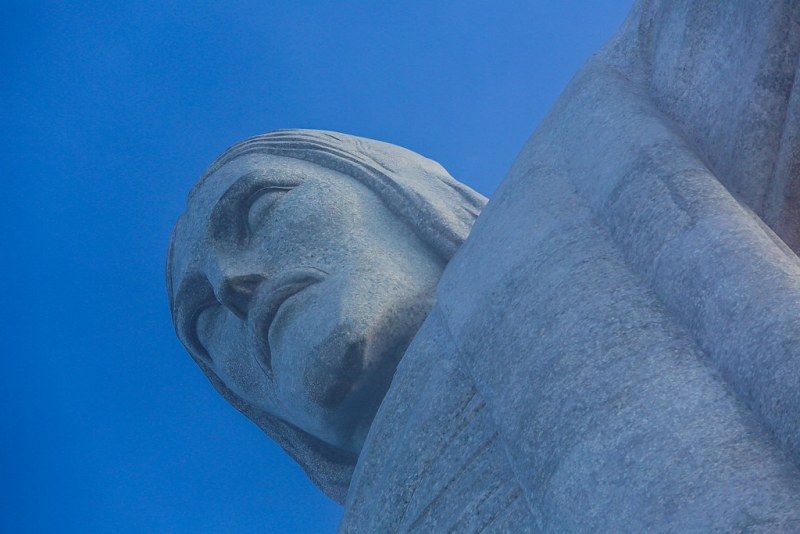 To make a highly resistible statue, a special kind of rock was used. The stone was specially imported from Sweden, and hence with the blend of concrete and soapstone, this wonder was made.
Source: brazilcultureandtravel.com, Image: Flickr 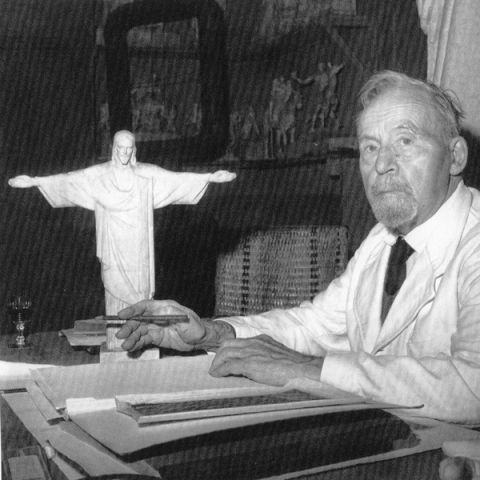 It was a pretty expensive venture and thus was incurred $250,000, which is equal to $3.2 million today.
Source: softschools.com

As it was built using solid stones, it weighs around 635 tons.
Source: brazilcultureandtravel.com, Image: Pexels

After a long wait, in July 2007, the Christ Redeemer was inducted as one of the 7 wonders of the world.
Source: softschools.com, Image: Flickr

11. When Lightning Damaged it!

Back in 2008, a ferocious thunder strike damaged the head, eyebrows, and fingers. Thanks to the soapstone insulating feature, the majority of the lightning was earthed. The same stone from the same place was used in the reconstruction. On January 16, 2014, the lightning again damaged the finger of the statue.
Source: brazilcultureandtravel.com, Image: EPA

12. An Attempt to Vandalize the Statue!

In early 2010, vandals sprayed paint on the head and right arm of the statue. The local mayor proclaimed it a “crime against the nation,” and the offender was later identified.
Source: softschools.com

13. Many Modes to Reach There

Being the most attracting tourist spot, earlier people used to reach Christ the Redeemer by road or by walk, but in 2003, escalators and elevators were introduced to make it convenient for visitors.
Source: softschools.com, Image: Wikimedia

14. Best Time to Observe it

Often advised by the local people that the best time to see this wonder is either in the evening or at night; as it presents a sparkling view of the city.
Source: traveladvisortips.com, GIF: tenor.com 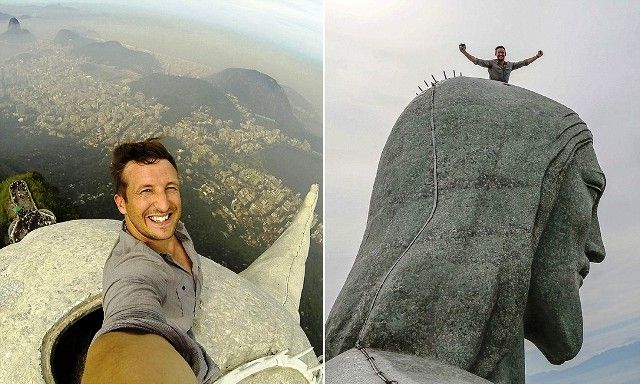 In May 2014, a travel blogger named Lee Thompson did a valiant task by climbing atop to take a selfie with the Christ The Redeemer; wait, he took permission from the authorities before doing that.
Source: allwonders.com, Image: pinimg.com

The towering “Cristo Redentor” (Christ the Redeemer), has become a cultural icon of both Rio de Janeiro and Brazil.
Source: history.com

17. A Symbol of Christianity

The statue has also become a symbol of Christianity across the world.
Source: time.com

The statue of Redeemer rises from the tropical foliage of Tijuca National Park, which is considered the planet’s largest urban forest. Clear-cut once, the area was replanted by hand in the 1860s.
Source: National Geographic, Image: Flickr

The initial design of the statue showed Christ holding a celestial globe with one hand while carrying a large cross with the other.
Source & Image: BBC

20. Boyfriends’ Names on the Back of Jesus

Well! The construction of Christ the Redeemer involved many women volunteers who often added a personal touch to their work by writing messages or their boyfriends’ names on the back of the tiles.
Source & Image: BBC

In 2006, the Catholic Church declared Christ the Redeemer a sanctuary, permitting couples to wed in the chapel at the base.
Source: National Geographic, Image: tumblr.com

Well! Christ’s Armpit is the name of a street party enjoyed by the locals. Christ’s Armpit, or “Suvaco do Cristo”, weaves its way beneath Corcovado in tribute to the outstretched arms overhead. Depicting a strong connection between the statue and those who live closest to it, crowds of dancers and drummers samba through the streets wearing T-shirts bearing the image of Christ, during the carnival.
Source: BBC, GIF: giphy.com

In October 2010, Conselho Nacional Do Sesi, the national council of social services in Brazil, ran the world’s biggest hug; using the Christ the Redeemer statue in Rio de Janeiro. Projections of cityscapes and 3D imagery were used to create the illusion that Christ was closing his arms around the city; raising public awareness of the impact of sexual abuse on children and teenagers, and encouraging the development of healthy relationships of trust.
Source: theinspirationroom.com, Video: Vimeo

Shukla Sundeep - August 22, 2015
0
Drew Blythe Barrymore is an American actress and producer, who came out of alcohol and drug addiction in her adolescence. She is the 5th...