The Earth does not belong to us; we belong to the Earth– Chief Seattle. The quote is a caution to the growing exploitation of the Earth. Since the existence of human beings, they have been claiming their authority over the Earth, and in the process, concerns to save the earth, are often raised. Before it’s too late, we should endeavor to save the Earth in our own little contributions. However, at first hand, we should get familiar with our Mother Earth– the only planet in the solar system to sustain life, which was formed approximately 4.54 billion years ago. Although, we spend all our lives on the surface of the blue planet we know very little about it: such as the Earth is not a perfect sphere, rather it’s an oblate spheroid, etc. Here are some interesting facts about this living planet: 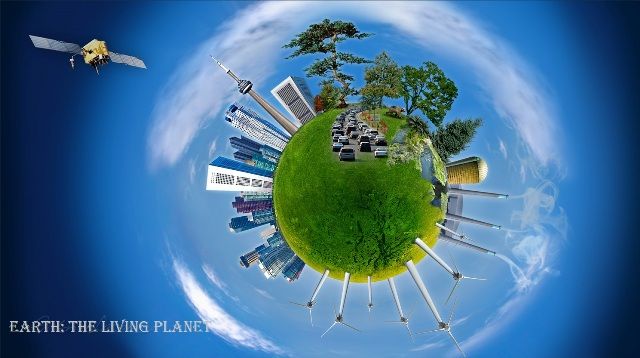 1. Every time you get a new surface!

The surface we walk on is recycled. Earth’s rock cycle transforms igneous rocks to sedimentary rocks and then to metamorphic rocks and back again.
Source: study.com

Let’s suppose we all are passengers on a giant spaceship i.e. Earth. It means we all are trekking around the sun at a mean velocity of 66,600 mph (107,182 km/h). We could be actually spinning through space at just over 1,000 miles per hour. How does that sound?
Source: Wikipedia

Earth is not a perfect sphere rather an Oblate Spheroid. As the Earth spins, the gravity points toward the center of our planet and a centrifugal force push outward. However, the gravity acts perpendicular to the axis of Earth, and, the Earth’s axis is tilted, and the centrifugal force at the equator is not exactly opposite to gravity. This imbalance accumulates at the equator, where gravity pushes extra masses of water and earth into a bulge.
Source: Wikipedia

Volcanos are considered Earth’s informers as we get most of the information of the Earth’s constituent materials from them. Although Hawaii’s Kilauea volcano has a reputation of being a frequently erupting volcano, it’s still not Earth’s most active volcano. “The Stromboli Volcano” in the west coast of southern Italy is the most active volcano. It has been erupting continuously for over 2,000 years, according to the U.S. Geological Survey. It has earned the title- “Lighthouse of the Mediterranean.”
Source: Wikipedia

When it comes to thinking about giant life forms, usually whales and elephants come to mind. But what about the trees. The General Sherman giant sequoia is the largest known stem tree on the earth. The trunk of the tree contains around 52,500 cubic feet i.e. 1,486.6 cubic meters of material.
Source: Wikipedia, image: wikimedia.org 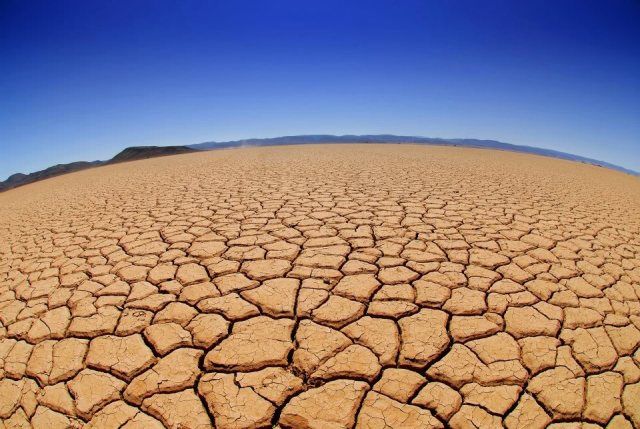 The Atacama Desert of Chile and Peru is the driest place on Earth. In the center of this desert, there are places where rain has never been recorded.
Source: Wikipedia, image: cloudfront.net 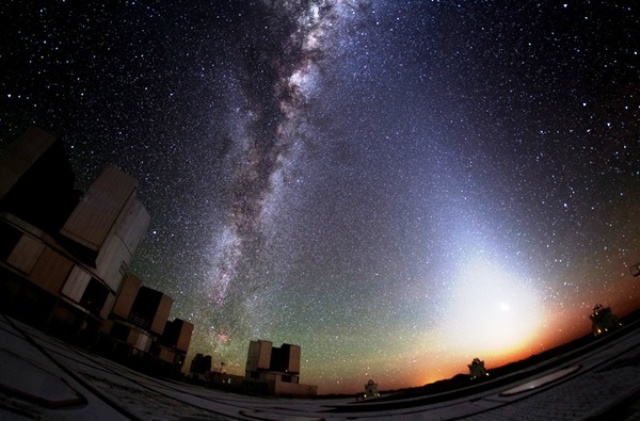 Every day our planet Earth is showered with dust from space. On a daily basis, around 100 tons of interplanetary material usually in the form of dust drift down to the Earth’s surface.
Source: universetoday.com, image: astronomy.com 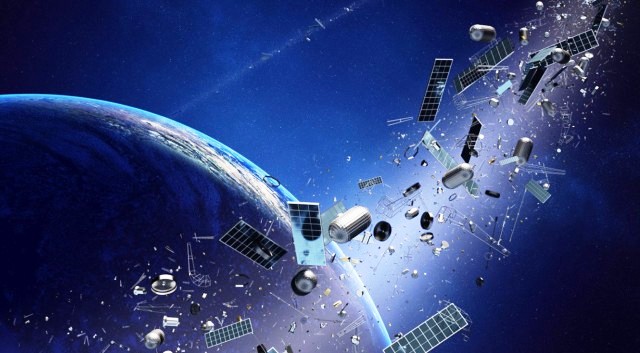 11. Its gravity is not uniform!

Gravity is not the same at every place on the earth’s surface. Yes, you read that right. Hudson Bay in Canada has lesser gravity than other regions on the planet. All thanks to retreating glaciers on the surface and swirling magma deep down in the core due to which there is less land mass in that part of the planet and hence lesser gravity.
Source: howstuffworks.com

12. A unique Planet of the Solar System!

Earth is the only planet in the Solar System that has not been named after a Greek or Roman deity.
Source: space-facts.com

13. Rotation of Earth is gradually slowing!

Earth’s rotation is decelerating at 17 milliseconds per 100 years. With this speed, it would take approximately 140 million years that the length of the day would become of 25 hrs.
Source: space-facts.com

14. You cant’s walk on the longest mountain range of the Earth! 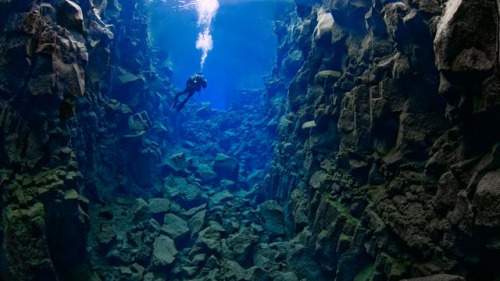 The longest mountain range on Earth is actually underwater. It is called the mid-ocean ridge system. It stretches for 80,000 km all around the world and is nearly 20 times longer than the longest range on the surface, the Andes Mountains. Not only that, the whole thing is completely volcanic.
Source: Wikipedia, image: martianherald.com

If you think volcanoes are the only things that explode you might be up for a surprise. On earth, even Lakes erupt. Africa, the borders of Cameroon, Rwanda, and the Democratic Republic of the Congo are home to some lakes that sit on top of the volcanic earth resulting in large pockets of deadly gas being trapped underneath them. If they were to explode, they would suffocate any passersby.
Source: science.howstuffworks.com, image: wikimedia.org

16. Earth’s Largest living thing can be viewed from the Space! 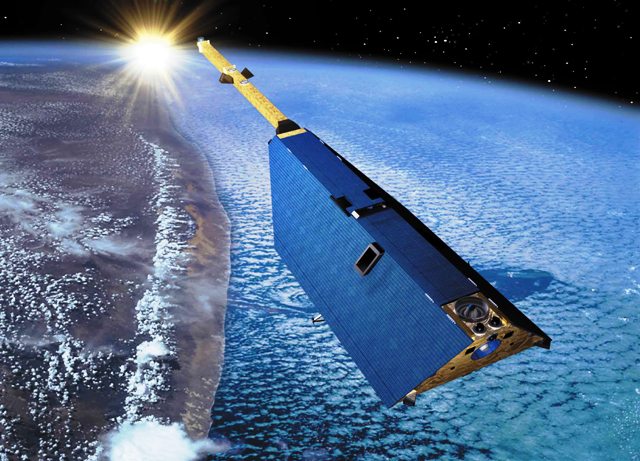 Build up from millions of tiny polyps; coral reefs are the largest living structures on the planet Earth. And when we say large we mean visible from space large! They also hold the highest density of life on earth, even more than rainforests.
Source: treehugger.com, image: biospherefoundation.org

17. Journey to the center of the earth 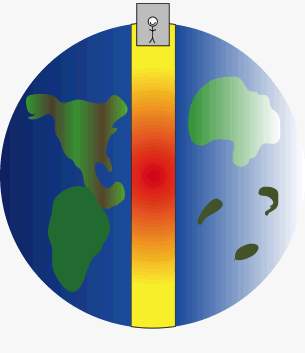 If we were to drill a tunnel straight through the Earth and dive in, in about 42 minutes, we would be on the other side, and if we don’t grab something to hold on, we will fall back and have a round-trip of 84.5 minutes. The only buzz kills apart from the nearly impossible task of digging up the earth is that the earth’s core is as hot as the sun, so good luck on your journey.
Source: hyperphysics.phy-astr.gsu.edu, image: wikimedia.org

18. What does lie beneath the Ocean?

The oceans cover around 70 percent of Earth’s surface, yet humans have explored just 5 percent of it. These oceans hold over 20 million tons of gold. But it is so dilute that a liter of seawater contains approximately 13 billionths of a gram of gold. If we could get all of it, then each person on Earth could have 9 pounds of gold. Damn it, humankind’s single goal should now be to get all that metal.
Source: oceanservice.noaa.gov

19. Chronology of life on Earth!

If Earth’s history were to be squeezed into 24 hours, life would’ve appeared on this planet at 4 am, plants at 10:24 pm, the dinosaur would have bid goodbye at 11:41 pm and human would’ve taken over at 11:58:43 pm.
Source: factslides.com

Shukla Sundeep - August 19, 2015
0
I'm a storyteller; that's what exploration is all about. Going to places where others haven't been and returning to tell a story they haven't...