Did you know the word igloo translates to “house” and can be used for houses made up of any material? Stereotypical-ly, igloo is associated with snow-y places of Canada and Greenland. Not much is known to many people about this scientifically made structure so here we are to the rescue, writing about some interesting facts related to it. 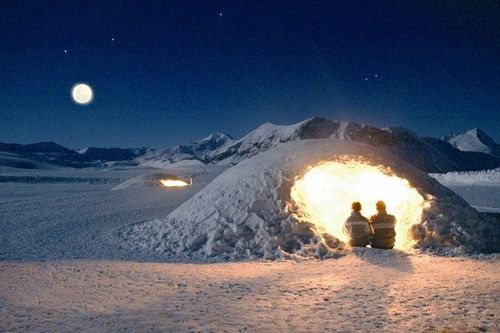 The meaning of igloo is “shelter”, generally made  by the Inuit people out of snow. They are made up of snow bricks and can comprise of 20 people at a time.
Source: warpaths2peacepipes.com

Igloos were just temporary winter shelters built by Inuit hunters for accommodating their families while on a hunting trip.
Source: warpaths2peacepipes.com

The speed of igloo making can be about 1 hour per igloo if the maker is really quick.
Source: richmond.com

The only tools that would be required to build an igloo would be a saw and snow spade.
Source: richmond.com

There are mostly three kinds of igloo. The smallest one was for temporary usage. The inter-mediate size was for semi-permanent dwelling but the largest one was made by a batch of two and could accommodate up to 20 people.
Source: igloostuff.blogspot.in

A full grown man can stand on an igloo  head without being afraid of it getting collapsed.
Source: igloostuff.blogspot.in

Now, mostly people do not know but snow and ice work as insulators. An igloo traps body heat so the people inside act as a furnace by providing their own heat.
Source: warpath2peacepipes.com

The snow begins to melt slightly on the inside of the igloo after a few days when occupied. During the times when it’s unoccupied, the melted snow freezes. The gradual thawing and freezing turn the structure to ice, making it stronger and warmer on the inside.
Source: wikipedia

Krishna - May 30, 2017
0
National Air and Space Museum possesses the largest collection of historic spacecraft and aircraft relics in the World. Known as the largest and most...