Named after the King of the Gods, Jupiter, the fifth and the largest planet in our Solar System. Jupiter is, in fact, the synonym of “Gigantic.” Besides being the largest member of the Solar System, Jupiter has many other aspects worth knowing. Let’s explore some interesting facts about this Gas Giant:

The name Jupiter had been given after the king of Roman Gods. For Germanic tribes, it represented Donar or Thor. For Greeks, Jupiter was seen as the God of Thunder, Zeus. For Mesopotamian’s Jupiter represented God Marduk and also the patron of Babylon city.
Source: space-facts.com, Image: wikimedia.org

Jupiter is a planet with a unique composition. In its center, an ocean is situated, and this ocean is of liquid metal i.e. metallic hydrogen. This ocean of liquid metal is surrounded by an envelope of hydrogen and helium gas with a thickness ranging up to thousands of kilometers.
Source: bobthealien.co.uk

After the Moon and the Venus, Jupiter is the third brightest object one can see at night. You can watch Jupiter even with a small telescope or a good pair of binoculars.
Source: toptenz.net, Image: wikimedia.org

The mass of Jupiter equates to the mass of 317 Earths! Also, Jupiter is so huge that when lined up in a straight line, it would take about 11 Earth to reach from one end of Jupiter to another. You can fit about 1300 Earth inside Jupiter. Isn’t Jupiter huge?
Source: theplanet.org

Jupiter is such a slow-moving planet that it takes about 11.8 Earth years for this planet to make one orbit around the Sun.
Source: space-facts.com

Even though Jupiter orbits very slowly around the sun, yet it is the fastest spinning planet in the entire Solar System. One rotation of Jupiter about its axis takes a mere 10 hours! It is rotating so fast that the planet has started to bulge at equator while flattening out at other places.
Source: universetoday.com

Imagine looking up at the night sky, and it is filled with 67 moons of various shapes, sizes, and colors. That’s what it looks from the Jupiter as this planet alone has 67 moons. These moons are divided into three categories: the inner moons, the Galilean moons, and the outer moons. Some of these moons are so big that Pluto seems like a smaller counterpart in measurement. One of the moons of Jupiter, Ganymede, is the largest moon in the solar system.
Source: theplanets.org

8. The Great Red Spot is shrinking!

You must be familiar with the famous Great Red Spot on the Jupiter which is believed to have been on the planet for the last 350 years. The red spot is a huge storm which is about the size of Earth and is actually shrinking. It’s currently half the size of what it used to be a century ago. Would it disappear completely? No one knows.
Source: universetoday.com

Jupiter has rings around it just like Saturn but much fainter. They are believed to be made out of matters which were ejected by Jupiter’s moons especially when these moons were struck by the meteor.
Source: universetoday.com, Image: wikimedia.org

If you closely look at Jupiter, you will see many bands of different hues of red and brown on it. These are due to the colorful clouds around Jupiter, which are very thick and filled with poisonous gases. Jupiter spins so quick on its axis that it whips up the atmosphere just like we whip up eggs at the move. This constant whipping creates the bands of colorful clouds around the planet.
Source: sciencekids.co.nz, Image: wikimedia.org

The atmosphere of Jupiter is very strange. It is thin and cold on the outside but as you go inside, it will become thicker and hotter. If you continue to go inside the atmosphere, it gradually turns into a thick fog. Below 1000 km, the atmosphere turns liquid due to extreme pressure!
Source: sciencekids.co.nz, Image: Wikipedia 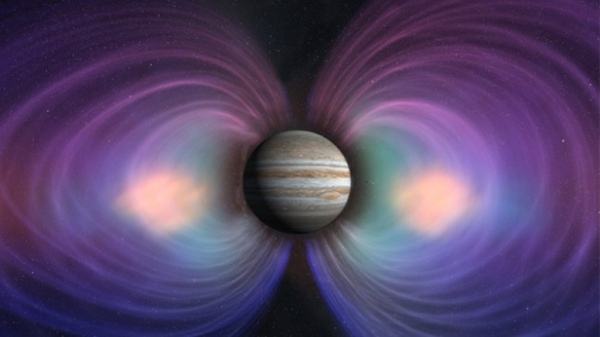 Jupiter has the strongest magnetic field among all other planets in the Solar System and fourteen times stronger than Earth’s magnetic field.
Source: toptenz.net, Image: spaceanswers.com 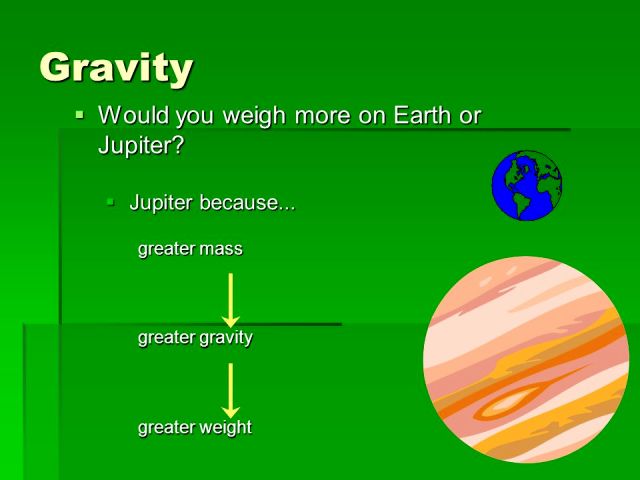 Among all other planets in our Solar System, Jupiter has the strongest gravitational pull. Gravity is so high on Jupiter that if we stand on it, we will weigh three times more than our Earth.
Source: ummah.com, Image: slideplayer.com

Jupiter’s extremely strong magnetic field acts like a vacuum cleaner by sucking up all the destructive bodies like comets, meteorites, and asteroids. In the year 1994, the comet Shoemaker-Levy 9, was on its way to collide with Earth but thankfully got pulled away from its path by Jupiter and eventually collided with it. Thanks, Jupiter!
Source: bobthealien.co.uk, image: wikimedia.org

15. Jupiter has its own radiation!

In our Solar System, Sun is the greatest source of radiation, and all planets are visible due to this radiation. Jupiter is one planet, which creates its own radiation even though its light is not as radiant as that of the Sun’s.
Source: space.about.com

Jupiter emits radiation but it can never become a star. The reason being that there is not enough mass in Jupiter to create the necessary core conditions to become a star.
Source: space.about.com