When it comes to paintings, the foremost name appears to be that of Mona Lisa by Leonardo da Vinci- the great Italian artist of the 15th century. However, he was not only a painter but a polymath, who influenced a broad spectrum of creative fields. Let’s explore some interesting facts about this Renaissance Man: 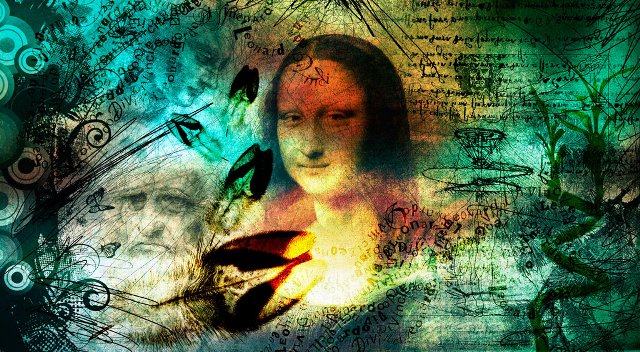 He was born as the out-of-wedlock son of Piero Fruosino di Antonio da Vinci (father) and Caterina (mother). His parents never married and he was the only child of them. However, he had 17 half-siblings with other partners of his parents.
source: history.com 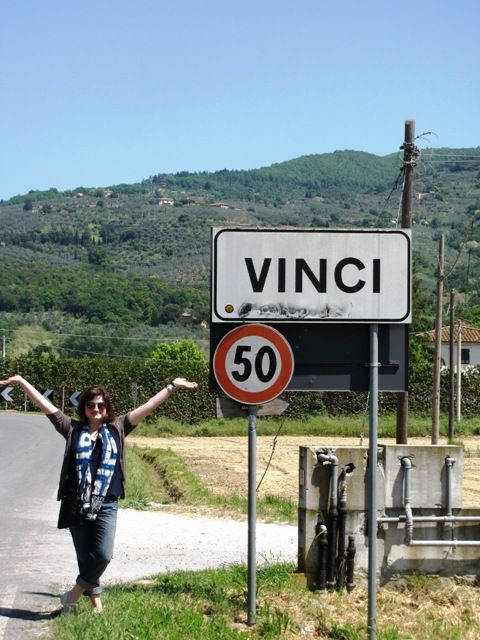 He was born in Anchiano, Tuscany (now Italy), which is close to the town of Vinci after which we associate his surname today.
source: history.com, image: 900poundgorilla.files.wordpress.com

Beyond basic reading and writing, he received no formal education.
source: history.com

4. The person behind his skills! 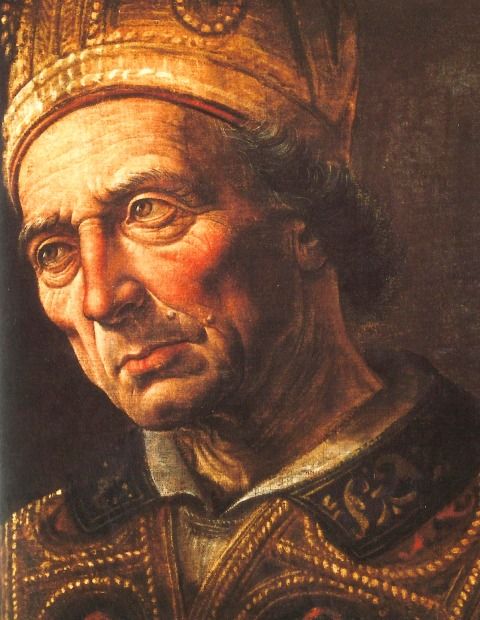 His artistic talent was first appreciated by his father and when Leonardo was 15 years old, his father apprenticed him to the noted painter and sculptor Andrea del Verrocchio, of Florence. He refined Leonardo’s sculpting and painting techniques for more than a decade and also trained him in mechanical arts.
source: biography.com, image: 3.bp.blogspot.com

Although his first work is supposed to be that of a drawing in pen and ink of the Arno valley (as reported by various sources) on 5 August 1473, Annunciation (dates from circa 1472-1475) is generally thought to be his earliest extant work. It depicts the angel Gabriel to whom God sent to announce the virgin, Mary, that she would conceive and give birth to a son named- Jesus, who would be called “the Son of God.”
source & image: Wikipedia

6. When his mentor was impressed with his work! 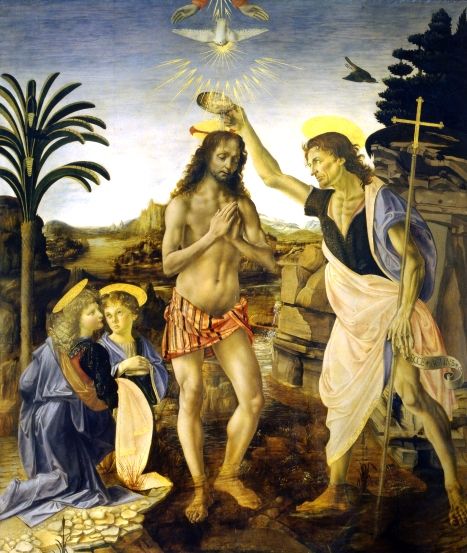 He assisted his mentor Andrea del Verrocchio in the famous painting- The Baptism of Christ. The painting depicts the Baptism of Jesus by John the Baptist. It is recorded that the angel to the left was painted by the young Leonardo and that impressed his mentor in one go.
source: Wikipedia, image: Wikimedia

7. Used to write from Right to Left!

Leonardo da Vinci was left handed and used to write from right to left, which resulted in a mirror script and was difficult to read for others.
source: thefactfile.org

He was very compassionate towards animals and was against to put animals in cages. He used to buy caged animals and then set them free.
source: thefactfile.org

Throughout his life, Leonardo da Vinci had been a strict vegetarian, which is supposed to be a by-product of his affection towards the animals.
source: thefactfile.org

Leonardo recorded only two of his childhood incidents- one was when a kite dropped from the sky and its tail brushed his face. The second when he discovered a cave while he was exploring in the mountains and was terrified that some monsters might lurk there.
source: Wikipedia 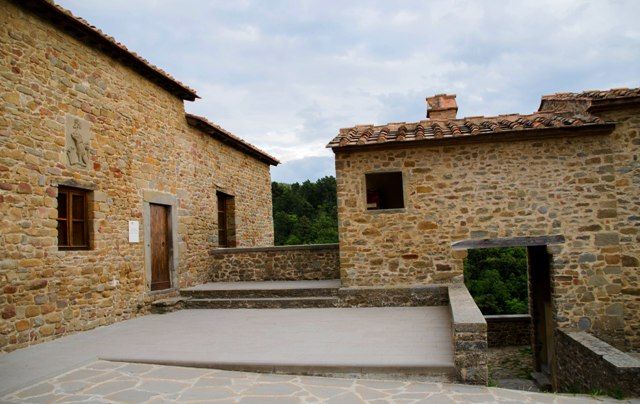 Who doesn’t want to explore the house of this great Renaissance artist! Leonardo’s childhood house is situated in a village called Anchiano within the town of Vinci in Italy’s metropolitan city of Florence. The house has been converted to a sort of museum of Leonardo’s famous works. The house was reopened to the public in June 2012.
source: discovertuscany.com, image: sophiesophrosyne.files.wordpress.com 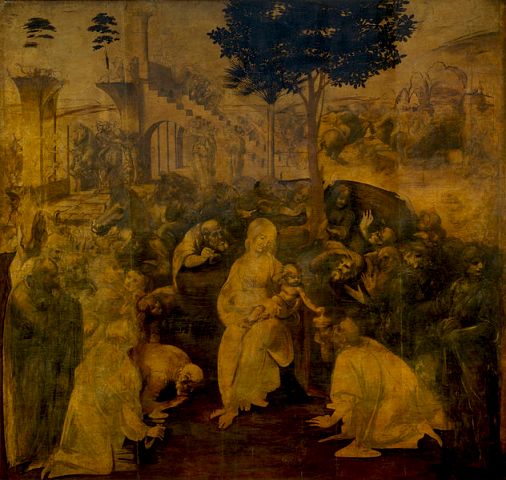 In 1478, he became an independent master and around 1482, he started to paint his 1st commissioned work- The Adoration of the Magi. However, he could never complete that piece.
source: history.com, image: Wikipedia

13. When his 12 years of work was destroyed within a minute! 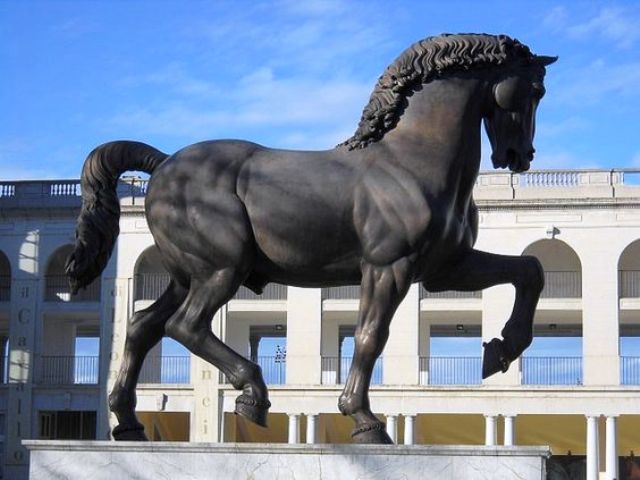 In the late 15th century, he relocated to Milan to create a 16-foot-tall equestrian statue (in bronze) to honor Francesco Sforza (the dynasty founder of the then ruling Sforza clan). He worked for 12 years on the project and prepared a clay model of the horse in 1493. However, during the imminent war, it was destroyed when the ruling Sforza duke fell from power in 1499.
source: history.com, image: s-media-cache-ak0.pinimg.com

Based on the work of the architect Vitruvius, Leonardo da Vinci depicted the proportions of the human body in his drawing- The Vitruvian Man. He drew this around 1490 and the drawing is supposed to be the extension of the universe in the form of human body.
source: Wikipedia

In the late 15th century, Leonardo da Vinci drew a mural painting- The Last Supper. It was a part of a plan to restore the churches of Milan. The mural painting depicts the scene of The Last Supper of Jesus with his twelve Disciples when Jesus announced that one of them would betray him.
source: Wikipedia

16. When he painted a mysterious smile!

Between 1503 & 1506, Leonardo painted world’s most famous painting- Mona Lisa. The woman depicted in the painting has been a matter of speculations. Earlier it was thought to be Mona Lisa Gherardini, a courtesan and later, it was considered as Lisa del Giocondo, wife of Florentine merchant Francisco del Giocondo. The painting is famous for the mysterious smile of the woman. King Francis I of France had acquired the painting and is now the property of the French Republic. The original painting has been displayed at the Louvre Museum in Paris since 1797. The painting has earned many glories like- the most visited, the best known, the most sung about, the most written about & the most parodied work of art in the world.
source: history.com 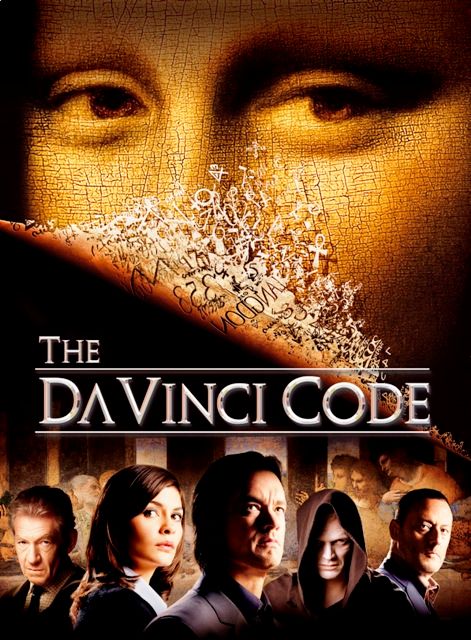 In 2006, a Hollywood film- The Da Vinci Code was released, which was based on his famous painting- The Last Supper. The film was inspired by the book- The Da Vinci Code by Dan Brown. The book proposed that the person to Jesus’s right was not John the Apostle, but Mary Magdalene. The speculation attracted a lot of controversy for depicting Mary Magdalene as the wife of Jesus.
source: history.com, image: vignette1.wikia.nocookie.net 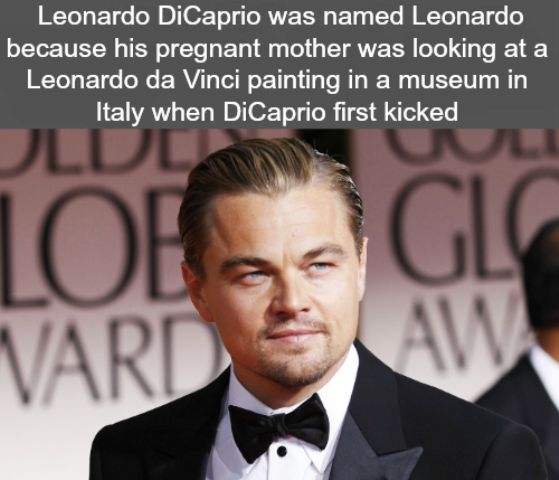 Shukla Sundeep - August 18, 2015
0
Uma Thurman is an American actress, renowned for her natural beauty and strong performances in movies like 'Kill Bill' and its sequel and 'Pulp...