What does the first thing that comes to your mind when you hear panda? Is it Kung Fu Panda? Even though pandas are extremely popular (and adorable!) blessing of nature, most present day toddlers know about panda from the movie and not “charts” or “books” (because books are too mainstream anyway.) But here are some interesting facts about panda (which are sure about the REAL panda “animal”!)

An interesting thing about the eye patch of the panda is that when a panda is a cub, it is circular in shape, but along its life journey, it changes to the shape of a teardrop.
Source: randomfactshistory.com

Pandas are on the brink of extinction and have been on the endangered species list since 1990. Scientists are making efforts to take the population rate from 1,000 to 8,000 by 2025.
Source: randomfacthistory.com

According to the popular Chinese philosophy of Yin-Yang, the world is a combination of two opposite forces which comes together to bring peace. The panda is considered a symbol of this philosophy because of its black and white color and its peaceful nature.
Source: onekind.org

For quite a while now, Chinese people have used panda as a symbol of peace. In ancient times, white flag with a picture of panda was raised in order to declare peace during wars.
Source: onekind.org

A legend states that the panda was once an all-white bear. Once a small girl tried to save a panda cub from being attacked by a leopard but the leopard killed the girl instead. Pandas came to her funeral wearing armbands of black ashes. As they wiped their eyes, hugged each other, and covered the ears, they smudged the black ashes.
Source: onekind.com

Pandas are pigeon-toed. This means that they walk with their front paws bent inwards.
Source: randomfactshistory.com

Pandas are only found in China and everywhere else you see, they are “borrowed” from China.
Source: randomfactshistory.com

Young pandas, along with koalas, elephants and hippos, eat feces of their mother. This notion is called ‘coprophagia’.
Source: wikipedia

11. Lets Use the Euphemism: Defecating

Can you imagine using the bathroom 40 times a day? Well, pandas can! They defecate about 40 times a day! But hey, don’t smirk! They have a reason for that: food (LOL!)
Source: wikipedia

Panda spends 55% of their lives finding, collecting, preparing and eating bamboos! The rest 45% must be for defecation then. Hmm.. pretty much explains.
Source: wikipedia

Panda researchers have to wear “panda suits” in order to look like one to work with cubs. Aren’t they adorable? (Not the researchers of course!)
Source: dailymail.co.uk

One of the reasons why WWF chose panda as its logo was to save cost! Sir Peter Scott, one of the founders, said, “We wanted an animal that is beautiful, is endangered, and one loved by many people in the world for its appealing qualities. We also wanted an animal that had an impact in black and white to save money on printing costs.”
This really shows the dedication and credibility of WFF. Way to go, man!
Source: wwf.panda.org, Image: wwf.org

When a panda cub is born, it is shipped to China on a FedEx aircraft to expand the gene pool.
Source: npr.org 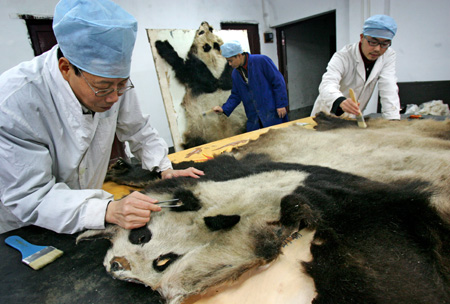 Have you ever felt embarrassed amongst your friends or family members? Bet almost everyone has! Pandas must be so embarrassed with each other all the time that a group of pandas is called an “embarrassment”.
Source: ncbi.nlm.nih.gov

A panda’s 99% diet is made up of bamboos. There are about 20 different species of bamboo that pandas will eat. However, bamboo is so nutritionally poor that the pandas have to consume up to 20 kg each day, which can take up to 16 hours!
Source: onekind.org

Shukla Sundeep - July 15, 2016
0
The Russian Empire was a state that existed from 1721 until overthrown by the February Revolution in 1917, though it was a short lived phenomenon. Stretching...