Persian, also known as Farsi has about 130 million speakers, mainly in Iran, Afghanistan, and Tajikistan. However, it is also spoken by a significant number of people in many other countries, including Uzbekistan, Bahrain, Iraq, Turkey, Kuwait, Azerbaijan, Israel, Turkmenistan, Oman, Yemen, the United Arab Emirates and America and is historically a more widely understood language in an areas ranging from the Middle East to India.

Persian is one of the oldest languages still spoken and used as it is to a great extent. This is the reason why Persian people can read poems from 1600–1700 years ago with less difficulty than an English person can read Shakespeare. The language has been well preserved for the last thousand years, Rumi’s poetry can be read and understood by Iranians even today!
source: quora.com

There has been a long historical relationship between Iran and France. Also, French has been the second language of Iran for many years. If you look closely, you will find some similarities in Persian and French. For instance, Thank you in Persian can be expressed with the help of the word مرسی (Mersi) and Merci in French. There is nothing but a minor difference between the two words.
source: bbc.co.uk

Persian is not considered to be a very tough language. The grammar is fairly simple. There are no articles and no genders. However, as there are no genders in the language, it can be a little confusing while distinguishing people as there are no separate words for he and she. But yes, the word order is really casual for the spoken tongue. There is no need to use pronouns at times, as the verb conjugation tells you the subject and object.
source: encyclopedia.com

4. The Land Of Persian Language 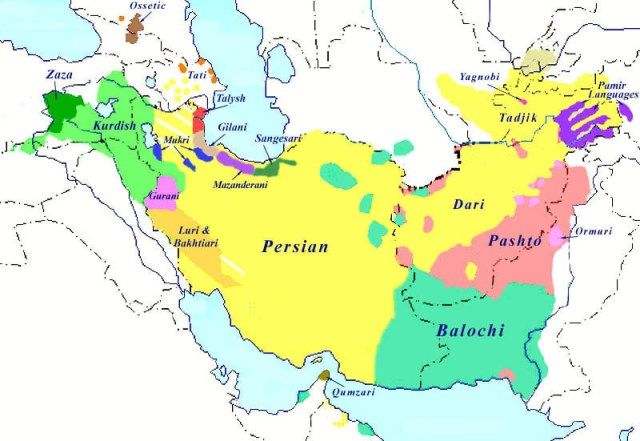 As you know the official language of Iran is Persian, you may not know that the language gets it name from Iran’s previous name Persia. Iran was known by the name Persia until 1935 when the Government of the day requested that it be called Iran and not Persia because Iran is the name of the country in Persian.
source: kaleidoscopebooks.com.au, image: Wikimedia.org

5. Other Forms Of Persian- Farsi And Dari

Poetry plays a very important role for Persians and famous quotes and verses from their great poets are recited in everyday life. For example, if you’re disputing a business deal, arguing with a family member or even trying to set an example for youngsters, often the power of poetry can diffuse or completely resolve the situation! Some famous Persian poets include Rumi and Sa’di.
source: britannica.com

7. Poetry Inscribed In The Halls On UN

President Obama quoted one of this medieval poet’s poems on 20th March 2009 in a videotaped message greeting the people of Iran and marking the Persian New year and the spring equinox. The poem is even inscribed in the Halls of the United Nations.
source: bbc.co.uk, image: s-media-cache-ak0.pinimg.com

Krishna - February 3, 2017
0
Bangladesh, located in the north-eastern part of South Asia, a tiny country surrounded by India and Bay of Bengal. The country has the great...