Constructed around 312 BC as the capital of the Nabataeans, Petra truly reflects the heritage of Jordan. This wonder of the world is half-built and half-carved into the rock. It is a small desert valley covered by towering sandstone cliffs on the edges of the Wadi Araba desert. Here are some interesting facts about Petra, Jordan: 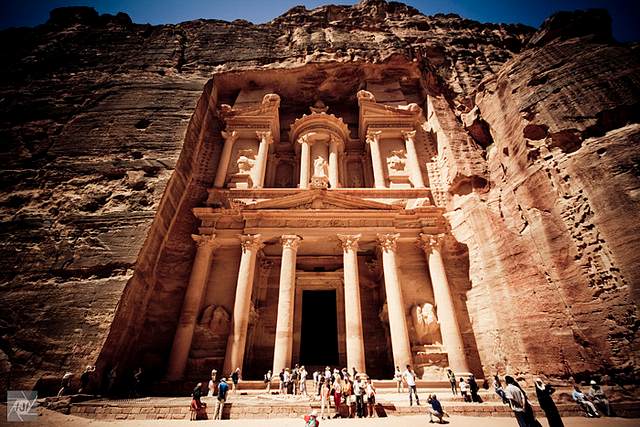 Petra got its name from a feminine Greek word “Petros” which means “rocks.” Its other name is Al-Batra in Arabic; however, it’s famous as “Petra.”
Source: Wikipedia

Petra is often called ‘Rose City’ because of the rose-red colored sandstone hills. It is well surrounded by the red-tinged mountains, which makes a reddish appearance.
Source: Wikipedia

3. Discovered By A Swiss Explorer

Johann Ludwig Burckhardt, a Swiss explorer, discovered Petra in 1812. As it was an unknown entity for about 5 centuries, it is also called the ‘Lost City.”
Source: Wikipedia

The Nabataeans, the ancient southern Arab people, made the city of Petra as a trade route to connect to South Asia and Greece. They arrived in Jordan in around the 6th century BC and were the creators of one of the most remarkable ancient civilizations.
Source: redicecreations.com, Image: atlastours.net

European studies found that The Nabataeans built this city to track the astronomical movements of the sun and also built an altar on the top of their house.
Source: nationalgeographic.com 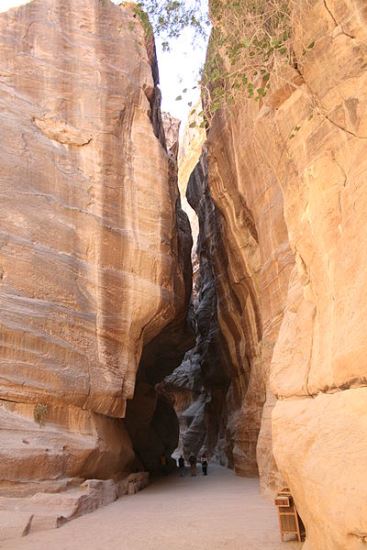 To enter the Petra, one has to pass through a narrow canyon of about 1 km. It is bound by tall cliffs called Al-Siq up to 80 km.
Source: allwonders.com, Image: Wikipedia

7. Petra vs The Dead Sea

Continuous salt blowing from the Dead Sea is solidifying the pores of the sandstone and slowly hampering the structures.
Source: geotimes.org

Petra is an enormous city of tombs, monuments and sacred structures carved into stone cliffs. It has around 800 carved tombs, and because of this, Petra is also denoted as “Royal Tombs.”
Source: calvin.edu

9. The Desert Of Petra Was Once A Lush Garden!

Because of the water conservation system at that time, there was a sufficient amount of water for around 30,000 people. There was also enough water in this desert region to have the lush garden; they managed to grow lush green gardens in the desert.
Source: softschools.com

Indiana Jones and the Last Crusade, a famous American adventure film of 1989 was filmed here. The fictional Canyon of the Crescent Moon was filmed on the eastern entrance of the Petra.
Source: Wikipedia

11. Shop A Great Variety Of Souvenirs! 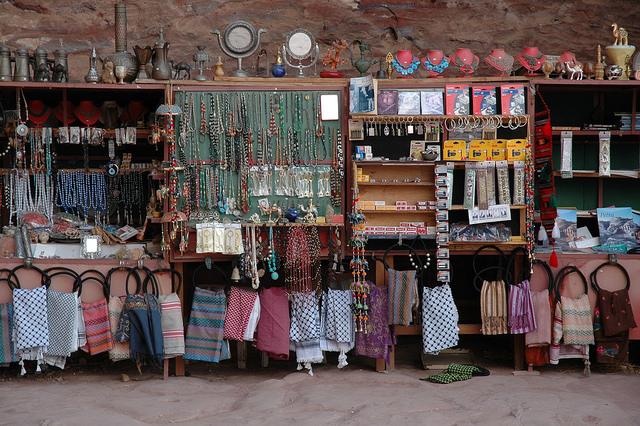 While touring the city of Petra, one can shop things such as authentic souvenirs of Jordanians and Nabateans. There is also a collection of stone carvings, embroidery, silverware and pottery.
Source: theancientcityofpetra.blogspot.in, Image: Flickr

In May, 363 AD, a pair of severe earthquakes destroyed half of the city. Many buildings and their water systems were highly damaged.
Source: amnh.org

Petra was the city of traders and hence was commercially vibrant and was once the house of many treasures. But due to its structural weakening, its treasures were stolen over the years.
Source: softschools.com

Because of its historical importance and sensitive structure, it was declared as a UNESCO World Heritage Site in 1985.
Source: softschools.com

Petra was once an important center of Christianity. It has a 6 AD marble pulpit from a Byzantine church called the Blue Chapel.
Source: echomon.co.uk, Image: wikimedia.org

16. Petra Was Made In 3 Different Periods!

The most of the Petra was made in 3 different periods- the Edomites (18th-2nd century BC), the Nabateans (2nd century BC- 106 BC) and the Romans from (106 – 395 BC) but the remains left are mainly of the Nabateans period.
Source: travelingmyself.com

OhFact! - November 1, 2019
0
Let's talk a little about the famous Tokyo Tower in Shiba-koen district of Minato, obviously in Tokyo, Japan. So, its Japanese name is Nippon...