The mysterious ancient queen ‘Queen Nefertiti’ was one of the most powerful women in the ancient times. Nefertiti was an Egyptian queen and consort of King Akhenaten who remains a mystery to researchers even today. It is believed that she lived an epoch from around 1370 B.C. to 1330 B.C. A bust of Queen Nefertiti discovered in 1912 is one of the widely acknowledged symbols of antiquated Egypt. Here are few interesting facts about Queen Nefertiti: 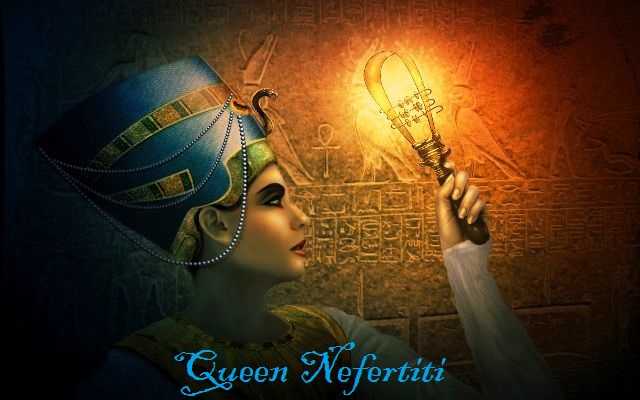 1. An Icon of Feminine Beauty

After Cleopatra, Nefertiti is the second most acclaimed “Empress” of Ancient Egypt in the Western imagination. She got the status of a celebrity after the discovery of her 3,300-year-old painted limestone bust in 1912. Nefertiti’s eminence as the most beautiful women & icon of female beauty in today’s culture is a benchmark. The name Nefertiti signifies the same, “The beautiful one has arrived.”
Source: Wikipedia, image: wikimedia.org

2. The Origin and Bloodline

Nefertiti’s origins are still confusing. The most prevalent theory says that Nefertiti was the daughter of the prestigious official, Ay, who later became Pharaoh. It is believed that Ay’s wife Tey looked after her as wet-nurse after Nefertiti’s mother died. This fact came to light through inscriptions from the Amarna period; Tey is called, “nurse of the Great Royal Wife.” We might never know the truth of this bloodline.
Source: History.com

Nefertiti got married to Amenhotep IV at the beginning of his reign. Her exact age is unknown, but she was around 15 at the time. Nefertiti then turned into the ‘Great Royal Wife’ of Amenhotep IV and helped to promote Akhenaten’s perspectives. Together they saw the wealthiest time in Ancient Egyptian history.
Source: learnodo-newtonic.com, image: wikimedia.org

Nefertiti ruled alongside her husband Akhenaten during the eighteenth dynasty (1550-1292 BC). During their reign, Egypt went through a major religious revolution, in which, a new practice of henotheism ‘the worship of one god only’ is adopted over polytheism. The old divinities had been disregarded, temples shut down, and priests were compelled to change their ways.
Source: kingtutone.com, image: wikimedia.org

Although Nefertiti’s reign lasted only for 12 years but, she was one of the most powerful queens who ever ruled. Nefertiti is found predominant in the depictions on the walls and tombs built during Akhenaten’s rule, portrayed in different roles as a supporting queen accompanying the king during ceremonial acts. While in other depictions she is shown taking part in the daily worship and making offerings to God Aten, driving a chariot or hitting the enemy. As a queen, she showed herself in ways only Egyptian kings did.
Source: encyclopedia.com, image: wikimedia.org

To honor the deity, Amenhotep IV changed his name to Akhenaten, the name by which he is known today. Nefertiti changed her name to Neferneferuaten-Nefertiti. The embracing of the new name was a sign of the continually expanding significance of the faction of the Aten.
Source: Wikipedia, image: wikimedia.org

Akhenaten had 6 daughters from his chief Royal wife, Nefertiti. As Akhenaten wanted a son, he married several other women including his sister with whom he fathered a son later known as King Tutankhamun (Tut). King Tut married one of Nefertiti’s daughters (his half-sister).
Source: annoyzview.wordpress.com, image: wikimedia.org

Nefertiti enjoyed many titles. Few of them includes Hereditary Princess; Great of Praises; Lady of Grace, Sweet of Love; Lady of The Two Lands; Great King’s Wife, his beloved, Lady of all Women; and Mistress of Upper and Lower Egypt.
Source: sciencedump.com.com

The beauty of Nefertiti is so mesmerizing that only her Bust captivated the public with her dazzling beauty for about 100 years. One of the German Archaeologist who revealed the bust wrote in his diary: “It is one of an alive Egyptian artwork. It cannot be portrayed in words. You must see it.”
Source: theguardian.com, image: wikimedia.org

Nefertiti and Akhenaten both were said to be in deep love and inseparable. King Akhenaten’s love was well-known for his wife, and as a couple they were often seen riding in chariots together, even kissing in public and with her sitting on his knee, a dynamic not generally seen in depictions of ancient pharaohs.
Source: web.archive.org, image: wikimedia.org

Queen Nefertiti disappeared from the historical records around the 12th year of Akhenaten’s rule. There are several theories behind this. Some think she died because of Plague. Some speculate she was elevated to the status of co-regent “equal in power to the Pharaoh” and began to dress like a man. Another theory introduces the idea of two co-regents, a male son, Smenkhkare, and Nefertiti under the name Neferneferuaten. Nefertiti’s disappearance is still a mystery.
Source: ancient-origins.net

Nefertiti history was long forgotten and hidden until the Bust of Nefertiti was found in 1912.
Source: annoyzview.wordpress.com

Study of Tutankhamun’s 3,300-year-old tomb revealed some wall markings that indicated a hidden doorway. Also, the size of Tutankhamun’s tomb is smaller than what it should have been for the final resting place of an Egyptian king. The hidden doorway and other facts suggested that there could be another chamber and the Tomb was originally made for the queen. It will be an astonishing archaeological discovery if it proves true.
Source: Wikipedia

Krishna - March 24, 2017
0
Orlando is a vibrant well-kept city in Florida, United States. Bloomed with gorgeous parks and gardens, the beauty of the city is undeniable. Often...