Home to diverse religious and ethnic groups and situated in the heart of the Middle East in Southwest Asia, Syria is currently facing its biggest turmoil in the form of Civil War. Besides being a war-torn country, Syria has many other aspects to be explored. Here are some interesting and lesser known facts about Syria: 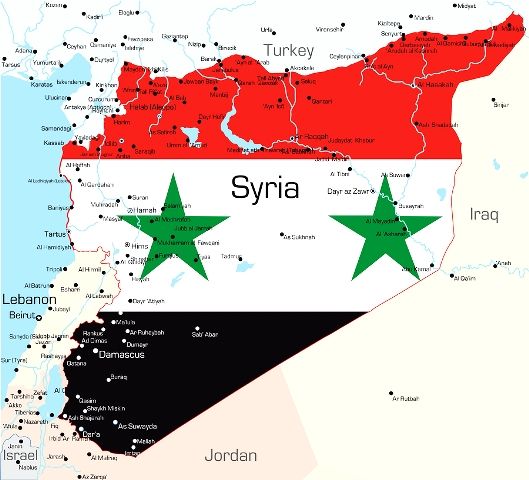 Damascus City (also known as Jasmine City), the capital of Syria, is one of the oldest continuously lived-in cities in the world.
source: telegraph.co.uk, image: arounddeglobe.com 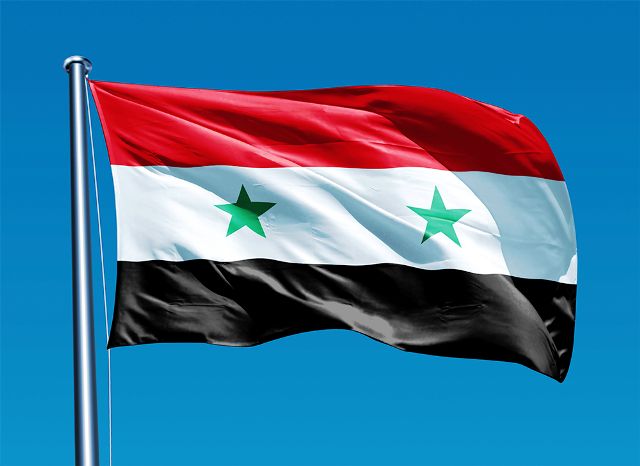 The two stars in the Syrian flag symbolize the previous union between Egypt and Syria.
source: wikipedia, image: syriaflag.facts.co 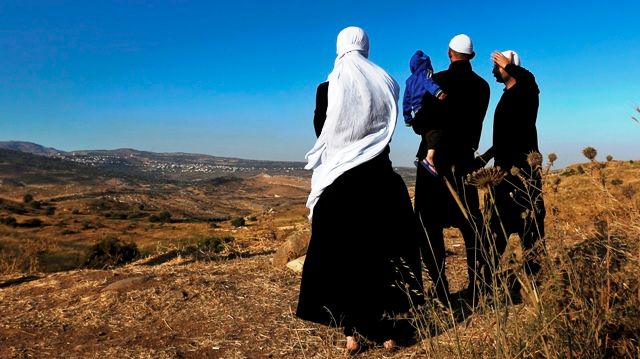 There is a strategically important plateau- Golan Heights that overlooks 4 countries- Lebanon, Jordan, Israel and Syria. The Golan Heights has also been a bone of contention between Syria and Israel since 1973. The valley has gained its name- The Shouting Valley because the separated families of these 4 countries often gather on each side and shout across to communicate with their families.
source: aljazeera.com, image: thezeppelin.org

4. When a Pope visited a mosque in Syria! 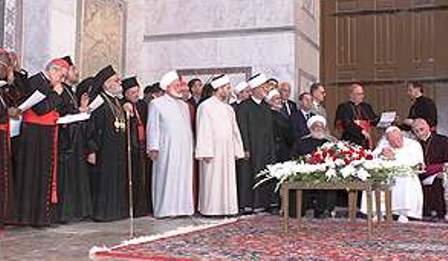 In May 2001, Pope John Paul II visited the Umayyad Mosque in Damascus city of Syria and became the first Pope ever to visit a mosque.
source: syriatoday.ca, image: syriatoday.ca

Syria has a long chronology of invasion. It was 1st invaded by the Egyptians in 1500 B.C., followed by Hebrews, Assyrians and Persians. After that, it became a part of the Roman Empire, followed by the Ottoman Empire. France was given control over Syria after the World War I.
source: easyscienceforkids.com

6. When Syria got its Independence! 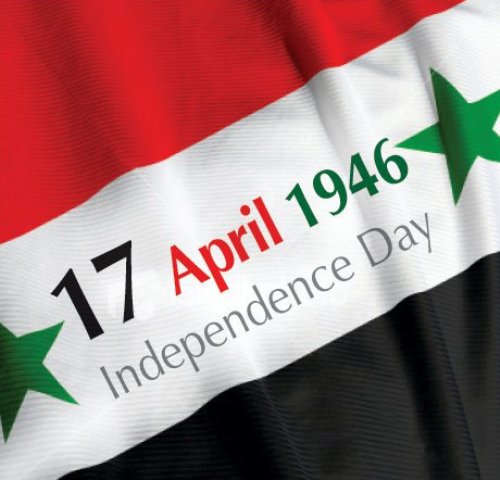 Syria remained a part of the Ottoman Empire for 4 centuries and after that came under French mandate in 1920. It got its independence from France on 17 April 1946.
source: nationalgeographic.com, image: deviantart.net 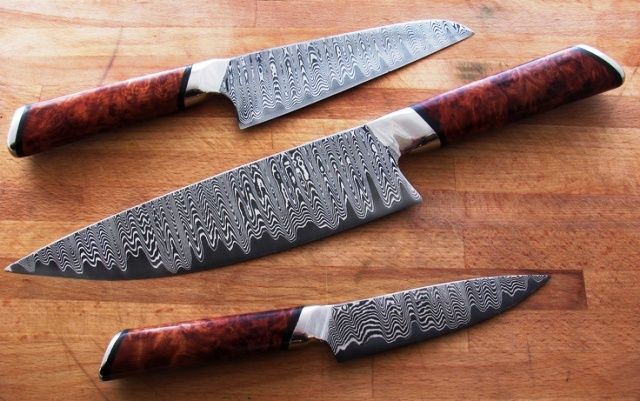 The capital city of Syria– Damascus is famous for its steel worldwide. The unique patterns in the Damascus Steel, make it quite alluring. Damascus Steel is mostly used for making knives, swords and other such weapons.
source: wikipedia, image: pinimg.com

8. Ruled by the Minorities! 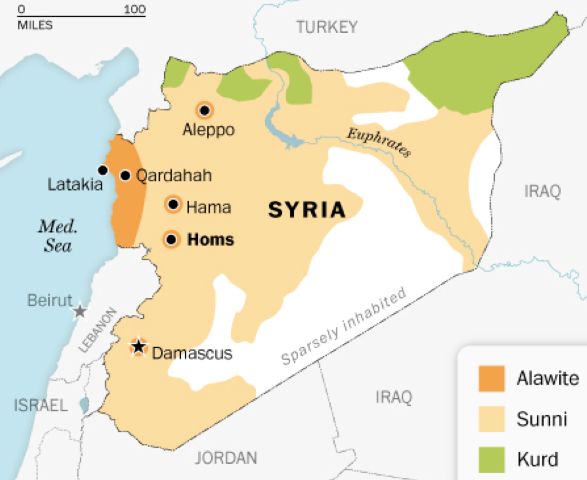 There are about 90% Muslims in Syria (mostly Sunni), however, the Alawite Minority (comprising 12% of total population) is politically dominant. Syria has been ruled by The Alawite-controlled Baath (Renaissance) Party since 1963.
source: nationalgeographic.com, image: geocurrents.info 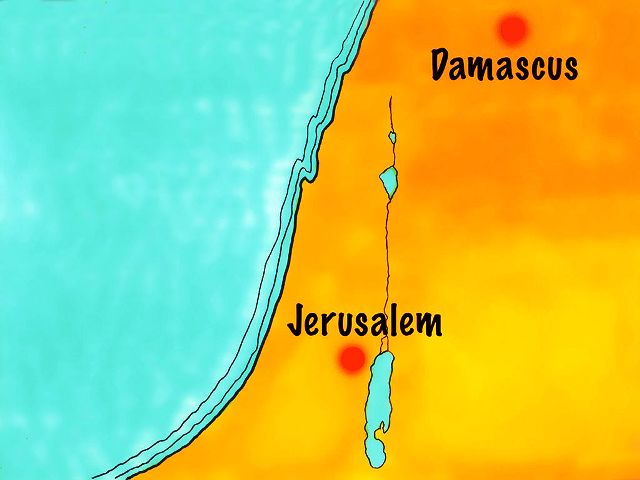 According to the Bible, it was on the road to Damascus, that St Paul was converted to Christianity when he was dazzled by a heavenly light.
source: theguardian.com, image: freebibleimages.org

11. First murder on the earth! 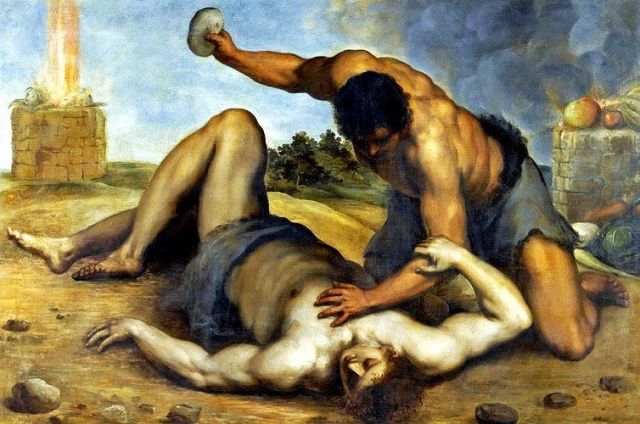 Do you know where the first murder on the earth took place? It was in Syria! According to sources, son of Adam and Eve– Cain killed his brother- Abel on Mount Qasioun, near Damascus.
source: wikipedia, image: leewoof.files.wordpress.com 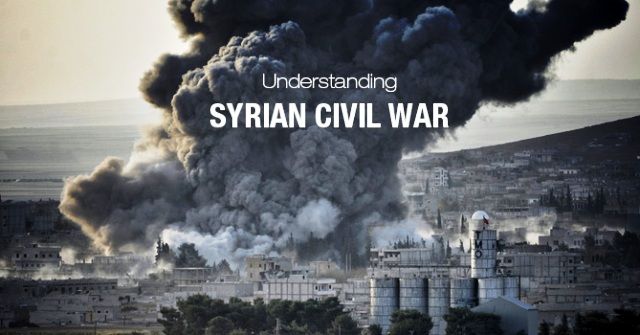 Syria has been under the grip of a brutal Civil War since the 2011 Arab Spring which was escalated after the government of Bashar al-Assad violently repressed protests calling for his removal. At present, the war is being fought between various factions- the Syrian Government, The Democratic Forces, a loose alliance of Syrian Arab rebel groups, Salafi Jihadist groups and the Islamic State of Iraq and The Levant (ISIL). The human rights violations are so severe that thousands have died, 10 million (almost half of the population of Syria) have been displaced and almost 4 million have become refugees.
source: wikipedia, image: mapsofworld.com

Rupinder - June 6, 2016
0
Leopards, more popular for the leopard print than themselves, sadly, are one of the five "big cats" in the genus Panthera. The big five...

17 Interesting Facts About The Roman Colosseum