Founded back in the year 1937, it is the national art museum in Washington, D.C. United States owes this grand art gallery to the one who believed that U.S. should also have a national art museum just like other big nations have. The man, Andrew W. Mellon proposed this great idea to the president of that time, Sir Roosevelt. Thanks to this man’s united efforts and love for art, it is in the list of one of the most popular museums in the United States. If you love to see a splendid collection of artwork, don’t forget to visit the National Gallery of Art in Washington. If you are intrigued, let’s know these some very interesting and amazing facts about this Gallery of Art: 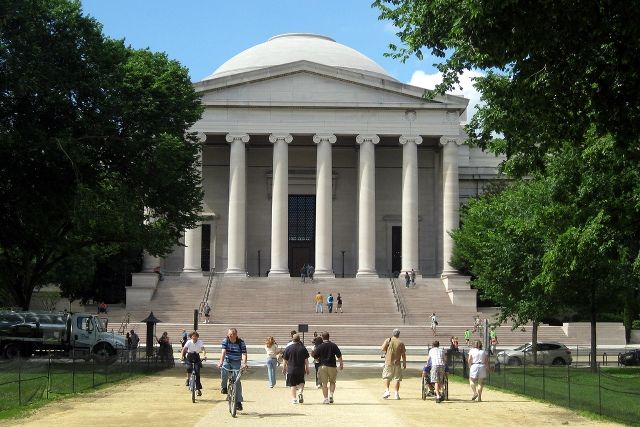 2. The Largest Ever Mobile

The largest mobile ever created (by Alexander Calder) is housed in the National Gallery of Art in its east building.
source: washingtonphotosafari.com, image: isitanygood.biz

In the year 1937, this art gallery was privately established by a joint resolution of the United States Congress. In 1936, Mellon wrote to President Franklin D. Roosevelt offering a proposal to construct the building for this art gallery and also fund it himself. With the president’s support, Congress accepted Mellon’s gift and the construction for National Gallery of Art began in March 1937.
source: Wikipedia, image: encyclopedia.densho.org

6. A National Award For It

The design of the Gallery’s East Building received a National Honor Award from the American Institute of Architects in 1981. The famous architect I.M. Pei made it possible. The design is actually appreciable.
source: washingtonphotosafari.com, image: c2.staticflickr.com, image: upload.wikimedia.org

Years ago, the National Gallery of Art signed a cooperative agreement with the National Park Service to create a sculpture garden within the area of the museum. It was in the year 1999 when the sculpture garden got opened to the public. The garden acts as an outdoor gallery for sculpture works. Tourists are quite much attracted to the sculpture garden for its design and architecture is brilliantly planned and enforced.
source: nga.gov, image: i.ytimg.com, image: travellingflip.files.wordpress.com

The Sculpture Garden designed by the famous architect Laurie Olin has a circular reflecting pool and fountain in its design. During winters, the pool is transformed into an ice-skating rink.
source: washingtonphotosafari.com, image: img1.southernliving.timeinc.net

The National Gallery of Art is a huge crowd puller. The exhibition Treasures of Tutankhamen from November 1976 to March 1977 attracted more than 800,000 visitors during these four months.
source: encyclopedia.com

11. Who Is Andrew William Mellon?

Andrew William Mellon was American banker, businessman, philanthropist, art collector, and politician. He died on 26 August 1937. He was the amateur art collector. He was the person who proposed the Idea of Art Museum to President Roosevelt in Washington D.C.
source: Wikipedia, image: american-historama.org

Don’t Despair, It’s Time To Be Inside

Shukla Sundeep - August 20, 2015
0
Tiger Woods is an American golfer who is considered as one of the most successful golfers of all time. There had been many great...