In the Jungles of Indian Subcontinent, a beautiful creature is wandering in search of prey and marking its own territory. However, unfortunately, this beautiful creature is also fighting against human for its life. Yes! this is the Royal Bengal Tiger. From deep Himalayan and central Indian Jungles to Mangroves of Sunderban, there lies the kingdom of the Royal Bengal Tiger, a creature that is seen rarely. The Royal Bengal Tiger is one of the most efficient predators in the Cat family. Now, this animal is feared as the killer and man-eater, perhaps this conception is propelling human into killing this beautiful beast. Let us know some more interesting facts about this Royal creature, Panthera Tigris Tigris. 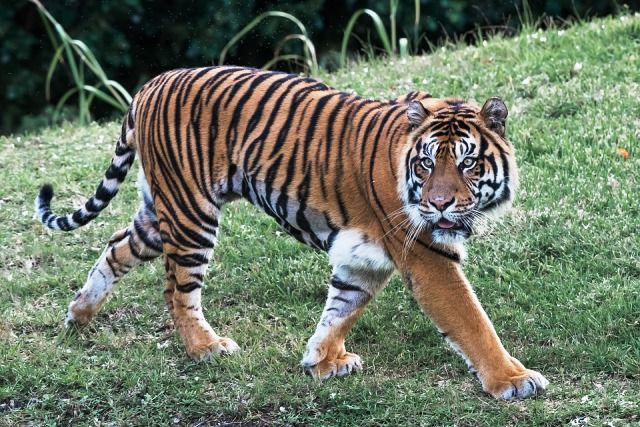 The Bengal Tiger has enormous strength and courage. It does not fear anyone and considered one of the top predators in the World.
Source: topyaps.com

The oldest Bengal Tiger fossil dates back 16,500 years, which was found in Sri Lanka.
Source: topyaps.com

3. One Of The Heaviest And Largest Cats 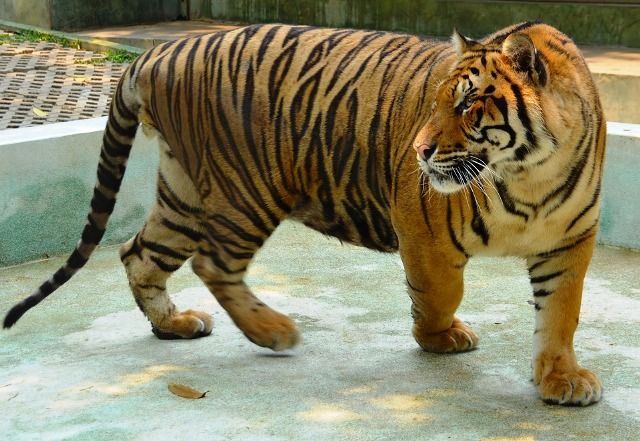 An adult Bengal Tiger is about 3 meter or 10 feet long (from head to tail), whereas, a female is about 2.6 meters or 9 feet long.
Source: tigers.org.za

5. Once Found Whole Of South Asia

The Bengal Tiger was once found the whole of South Asia. Now, they are found in a very small part of the land of the region.
Source: bengaltigerconservation.blogspot.com, Image: Wikimedia

The Bengal tiger has 30 teeth in which 4 canines 12 or 14 incisors and others are molars and premolars. Its canines are about 6.4 to 7.6 centimeters (2.5 to 3.0 in) in length. They use their canines break the vertebrae and to rip up the skin of animals.
Source: seaworld.org, Image: allposters.com 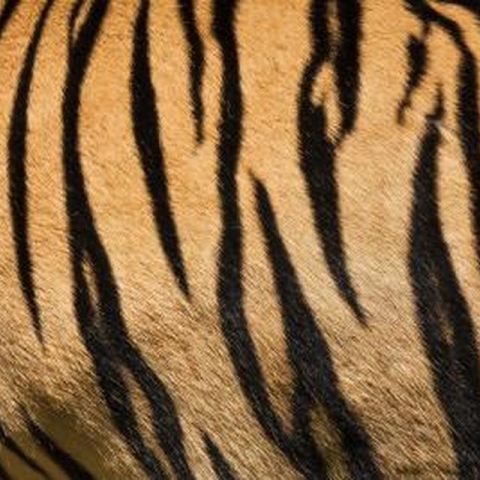 Like all tigers, Bengal Tigers have stripes on their skin and if the fur is shaved off, stripes will remain on the skin. Each tiger has different stripes and this helps Felinologist distinguish and study them.
Source: nationalgeographic.com, Image: pinterest.com

Bengal Tiger along with Siberian Tiger has the heaviest brain of all carnivores except Polar Bear. Its brain has 300-gram weight that is comparable to the size of a Chimpanzee’s brain. This cat has better memory power than humans and other animals. Tiger’s short-term memory alone lasts about thirty times longer than that of a human.
Source: listverse.com

Unlike Lions, Bengal Tigers are not social. They prefer to live a solitary lifestyle. Sleeping, hunting, patrolling, and spray-marking their territory are their primary functions.
Source: nationalgeographic.com, Image: Wikimedia

Bengal Tiger’s one punch can smash the cow’s mouth. Tiger’s punch is considered the heaviest punch of all feline species. So, never try to get close to it.
Source: telegraph.co.uk, GIF: Giphy

An adult male Bengal Tiger can go 2 weeks without eating. After that, it can gulp 34 kg or 75 lbs flesh at a time.
Source: Wikipedia, Image: tigers-world.com

If the tiger gets wounded, its saliva acts up as a herb. Its saliva is antiseptic and can prevent any infection.
Source: ranthamborenationalpark.com, Image: Wikipedia

Some Bengal Tigers are man-eaters in the Jungles of India. The tigers of Sundarban are feared as most ferocious and dangerous tigers on the planet. There have been hundreds of death cases of human in the area in recent years.
Source: scroll.in, Image: Wikimedia

Like other tigers, Bengal tigers are also active at night. During the day, they sleep and patrol their territory and at night, they hunt. However, 90% of their hunting attempts turn out to be a failure. Unlike lion, tiger needs nobody to hunt, it is a solitary hunter.
Source: ranthamborenationalpark.com, Image: tigers.panda.org

15. Most Dangerous Tiger In History

A Champawat (a town in Uttarakhand, India) tigress has been considered the most dangerous in the history of the tiger attacks. It killed 436 people before being gunned down by Jim Corbett in 1911.
Source: walkthroughindia.com, Image: allthatsinteresting.com 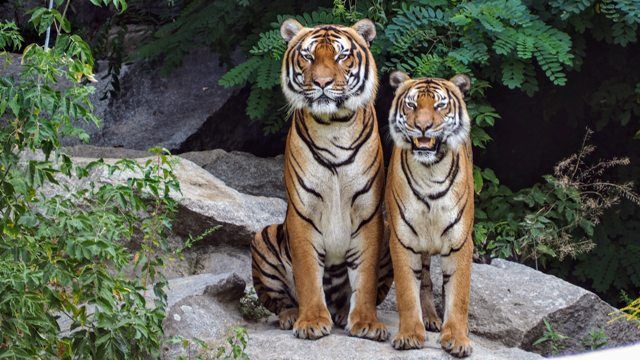 The population of Bengal Tigers has been in decline for a couple of decades. This is a highly endangered species. However, some nations are carrying out the projects to save them. Most of the tigers live in India which is home to about 2200 tigers. In some past years, their population has slightly increased.
Source: worldatlas.com, Image: Pexels

White Bengal Tiger is a subspecies of the Royal Bengal Tiger. These tigers are very rare as their coloration is dependent on a defective, recessive gene that is passed on from their ancestors. Due to the trophy hunting and poaching, this beautiful cat has become rare in the wild over the past couple of centuries.
Source: a-z-animals.com, Image: Pixabay

Bengal Tiger’s bite is one of the most powerful bites in the family of Big Cats. Its bite force is about 1050 pounds per square inch (psi) which is stronger than that of a lion. Tiger can drag its prey more than half a mile no matter how big the prey is.
Source: themysteriousworld.com, Image: Pixabay

The Average life span of the Royal Bengal Tiger is 14 years in the wild but in captivity, they can live up to 25 years.
Source: discoverwildlife.com, Image: Wikimedia

Like other tigers, the Bengal Tiger’s hind (rear) legs are slightly larger than its front legs. They help tiger to jump in the air up to 5 meters in the air.
Source: animalplanet.com, GIF: giphy.com

The Royal Bengal tiger’s roar can petrify you. The roaring can be heard from up to 2 km distance at night.
Source: topyaps.com, GIF: Gfycat

A Royal Bengal Tiger’s territory can expand up to 100 square km area or 24,710 acres in size. It marks territory by its urine.
Source: topyaps.com, GIF: Giphy

Despite being attacked by the tigers many times, Soliga people of Karnataka resides in the wilderness where tigers reside. Apart from it, Warli Tribe of Western India also resides with the Tigers. Several other tribes in Sundarbans are living with these dangerous cats.
Source: bbc.com, Image: Wikimedia

Many tribes in the northeast of India have been worshipping tigers for centuries. The Warli people consider tiger to be a God. When the Warlis hear a tiger roar or spot tiger feet marks, they will scream “Paoona Aala” meaning the guest has come. Then they will break a coconut over the feet mark and smear the gulal (A Sacred Vermilion) over it. The presence of a tiger is considered to bring a good harvest. Several other tribes of Sunderbans worship the Tiger as the Lord of the South. According to traditions, the tiger is the owner of all the land and wealth of Sunderbans and shares it with Bonobibi (Hindu Goddess). Both Hindus and Muslims gather at a common site to worship the Tiger. Several other tribes in India worship tigers for the astrological benefits.
Source: sanctuaryasia.com

Like other tigers, the Royal Bengal Tigers are quite capable of climbing the trees. If any prey climbs the tree, tigers can hunt that even then.
Source: lairweb.org.nz, Image: Flickr

26. Swimming Is Its Sport

Like other big cats, the Royal Bengal Tiger enjoys swimming. It is an adept swimmer.
Source: ranthamborenationalpark.com, GIF: Giphy

Mating can occur at any time of the year. Mostly, they mate between November and April. When the female gets 3 or 4 years old, it gets receptive and mates. The gestation period lasts slightly more than 3 months. It bears 1 to 6 children at a time.
Source: bioexpedition.com, GIF: Giphy

Due to the many conservation programs of the Indian Government, the tiger’s population is on the increase. As per the reports of 2016, around 3,890 tigers now exist in the wild – up from an estimated 3,200 in 2010.
Source: worldwildlife.org

Shukla Sundeep - November 3, 2015
0
Watermelon! Now, doesn’t this one fruit bring water to your mouth? We can hear you saying, “Yeah, it does.” One of the most special...