With the state seal superimposed on the center, the flag of Florida consists of a red saltire on a white background. If going back to history, Florida has adopted its flag from the Spanish legacy. However, with the passage of time, the appearance of the flag has changed. Obtaining the control of Florida in 1513, Spanish Empire used a number of flags to represent the state. To know more, let us know some interesting facts about the Flag of Florida. 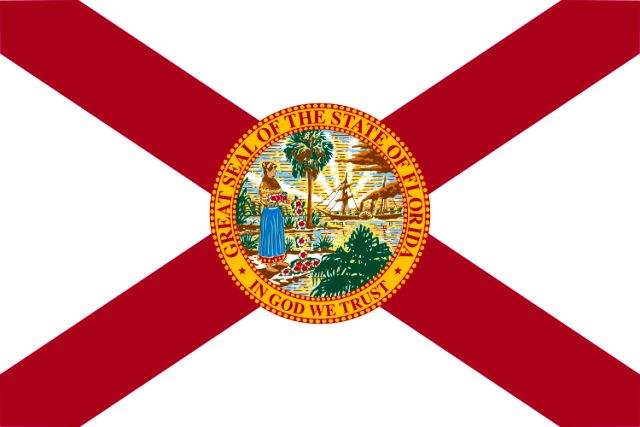 1. Flags Made By Spanish Authorities

When Spain claimed Florida in 1513, several banners or standards were used to represent the region such as the royal standard of the Crown of Castile in Pensacola and the Cross of Burgundy in St. Augustine
Source: Wikipedia, Images: Wikipedia

2. Flag After Controlled By Britain

When Spain ceded Florida to Great Britain in 1763 through the Treaty of Paris, Britain used its original union flag to represent the state.
Source: pbchistoryonline.org, Image: Pixabay

3. The Flag Of The Republic Of West Florida

4. The First Recognized Flag Of Florida

On June 25, 1845, the first state flag of Florida was hoisted at the inauguration of its first governor, William D. Moseley. It had five horizontal stripes (blue, orange, red, white, and green) and a ribbon with the inscription “Let us alone.”
Source: britannica.com, Image: Wikimedia

Between 1821 and 1861, Florida had no state flag but after the American Civil War, Florida was the first Southern state to adopt its own flag. A state seal appeared on the center with the white background. The flag also showcased the design of a woman sailing a steamboat. The motto “In God We Trust” completed the design.
Source: britannica.com, Image: museumoffloridahistory.com

During the time of reconstruction in the 1860s and 1870s, a state flag was adopted which consisted of a seal with a white background and with a lady standing at the riverside and below it “In God We Trust” was written.
Source: Wikipedia, Image: Wikimedia

7. Flag Of The Previous Century

A red saltire was added to the background of the flag on November 6, 1900, so it would not resemble a symbol of surrender.
Source: britannica.com, Image: Wikimedia

Some changes were made on the flag in 1985. With the state seal centered, a red cross is placed on the white shield. The flag represents the land of sunshine, flowers, palm trees, rivers, and lakes. The seal features a shining sun, a cabbage palmetto tree, a steamboat sailing, and a Native American Seminole woman is scattering flowers.
Source: worldatlas.com, Image: Wikimedia

Shukla Sundeep - September 18, 2019
0
When we talk about the unique festivals around the world, Halloween pops up as the frontrunner. Considered the scariest night of the year, Halloween...