This beautiful beast with a red-orange golden skin is the biggest cat of the genus Panthera. The camouflage with black stripes on it, not only adds to its beauty but also protects it in the wild. The tigers’ range extends over Asia from Turkey in the west to Russia in the east. Weighing around 200 kg or 440 lbs, Tiger is the heaviest of all Panthera genus. Having fearsome reputation in the world, the tiger has been worshipped by people for the centuries. Due to its extraordinary hunting skills, Tiger has been a symbol of power and valor. This beautiful animal ever reigned over the whole of Asia, today, it is fighting the battle of its own existence. Let us know some more interesting facts about this gorgeous cat, Panthera Tigris. 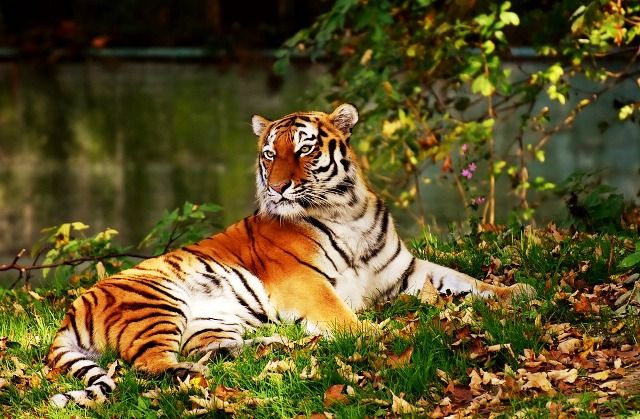 1. Largest Cat In The World 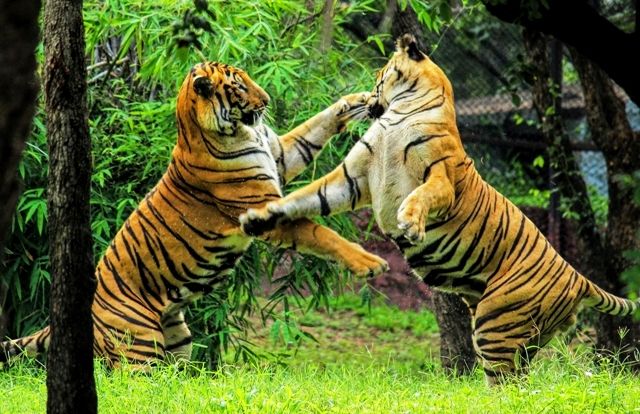 Tiger has the heaviest brain of all carnivores except Polar Bear. Its brain weighs about 300 gram that is comparable to the size of a Chimpanzee’s brain. It has better memory power than humans and other animals. Tiger’s short-term memory alone lasts about thirty times longer than humans
Source: listverse.com

3. How Did They develop?

Scientists believe that 3.2 million years ago, the snow leopard and the tiger lineages separated from the other Panthera species and both may be more closely related to each other than to the lion, Jaguar, and Leopard.
Source: news.bbc.co.uk

4. See The Heaviest One

The heaviest captive tiger ever recorded was one Siberian tiger, which had about 465 kg or 1025 lbs. It was held captive in Jaipur Zoo, India.
Source: dinoanimals.com, Image: Pixabay

Tigers prefer to stay alone. Most of the time, they patrol and mark their territory. They just mingle with females during the mating seasons.
Source: nationalgeographic.com, Image: Flickr

6. Stay Away From Its Punch

Tiger’s one punch can smash the mouth of Cow. Tiger’s punch is considered the heaviest punch of all feline species. So, never try to get close to it.
Source: telegraph.co.uk

Tiger’s canine is the longest among cat family. It has four canines: two upper and two lower. Its canines are about 6.4 to 7.6 centimeters (2.5 to 3.0 in) in length and able to break the backbone of other animals. It has 30 teeth.
Source: seaworld.org, Image: Pixabay

8. It Has A Magical Skin

The skin or fur of the tiger works like a magic in the jungle. Due to the stripes on its body, it camouflages itself to attack other animals. The interesting fact is that tigers do not have the same stripes. The different coating pattern helps Felinologist to study them. The stripes are not only on hair. but in deep on the skin also. So even if you shave off a tiger, it’ll still have the color and the stripes.
Source: nationalgeographic.com, Image: worldipreview.com

Tiger is a perfect embodiment of strength. It can wrestle down those animals also which weigh about twice of it. Tiger is a fierce hunter and can hunt buffalo, deer, cow, zebra, wild pig, and sometimes elephant, rhinoceros and even human also and other animals.
Source: nationalgeographic.com, GIF: giphy.com

An adult tiger can go 2 weeks without eating. After that, it can gulp 34 kg or 75 lbs flesh at one time.
Source: Wikipedia, Image: istockphoto.com

Tiger is a nocturnal animal. During the day, it sleeps and patrols its territory and night, it hunts. However, 90% of its hunting attempts turn out to be a failure. Unlike lion, tiger needs nobody to hunt, it hunts alone.
Source: ranthamborenationalpark.com, Image: nhm.ac.uk

Tiger’s claws are very sharp and about 10 cm in length. They help tiger to hold onto prey and take that down.
Source: seaworld.org, Image: Wikimedia

Tiger loves swimming and water sports. Sometimes, it rests in the water and in captivity, it plays with the ball.
Source: ranthamborenationalpark.com, Image: archive.defense.gov, GIF: giphy.com

14. Roaring Can Make You Deaf

15. You Are Not Faster Than Tiger

Tiger is the third fastest animal in the cat family after Cheetah and Lion. It can run at a speed of 65 km/hour. Tiger
Source: mnn.com, Image: Wikimedia

There are different types of tigers in the world. Amur or Siberian tiger, the largest species of tiger, is found in Siberia and Russian Far East. Sumatran Tigers are found on the Sumatran Island, Indonesia. Only 400-600 Sumatran tigers exist in the world. South China Tigers are now highly endangered with only 65-70 remaining and found in the South region of China. Only 250-300 Malayan tigers exist in the wild near Singapore. The largest number of tigers survive in India, the royal Bengal tiger, numbered more than 2500 species, found in the jungles of India. Three species; Bali Tiger, Caspian Tiger, and Javan Tiger have gone extinct now.
Source: worldatlas.com, Image: Pixabay

A tiger’s tail is about three feet or around 90 cm long and helps it balance when making tight turns.
Source: animalplanet.com

The average lifespan of the tiger is 15 years. However, in captivity and some rare cases, they live more than 20 years.
Source: kidzfeed.com, Image: Wikimedia

20. The Oldest Tiger Ever

Although, mating can take place at any time of the year, however, it occurs mostly between November and April. Tigress can be receptive for about 10 or 12 days. After constant breeding during these days, Tigress undergoes the gestation period of slightly more than 3 months. It is difficult to identify a pregnant tigress because it does not show a bulge until the last 10 to 12 days of pregnancy.
Source: seaworld.org, GIF: gfycat

Tiger penis does not get erect when aroused. Instead, he contains a bone (called baculum) and is covered with barbs which help maintain connection during intercourse.
Source: listverse.com, Image: Wikimedia

23. Surviving Is Hard For Cubs

Tigress bears 2 to 7 cubs at one time. However, sometimes due to adverse climatic conditions, disease, and attack by other predators, only half of the cubs survive in the jungle. One of the most interesting facts is that cubs do not open their eyes until the first 10 or 12 days. Tigress take care of their cubs for the next two years. A newborn cub weighs between 785 and 1,610 grams (1.75 to 3.5 lbs)
Source: seaworld.org, GIF: giphy.com, GIF: giphy.com

Tiger’s hind (or rear) legs are longer than its front legs. Hind legs enable the tiger to leap forward 20-30 feet in one jump. They can easily jump up to 5 meters in the air.
Source: animalplanet.com, GIF: giphy.com

26. Have You Ever Heard Of Hybrid Tigers?

Yes! there are a number of hybrid tigers in the world. They are called liger, tigon, litigon, etc. When one male lion and one female lion mate, a liger is born and when one male tiger and one female lion mate, a tigon is born. Liger is considered the largest and heaviest cat in the world and can weigh from 320 kg or 705 lbs up to 418 kg or 922 lbs. Liger and Tigon show both characteristics; Lion and Tiger. Liger has stripes over its body and male liger has a scanty mane.
Source: Wikipedia, Image: mnn.com

Hercules, a liger was the biggest cat in the world. It was 9 feet long from mouth to tail and weighed in about 430 kg or 922 lbs.
Source: liger-hercules.com, Image: Flickr

Tiger’s vision is six times better than that of a human.
Source: tigers.org.za, Image: istanbulescort-ilan.com

29. Keep Quite In Jungle! Tiger Can Hear You

Tigers are able to hear over a wide range of frequencies from 200 Hz to 100 kHz; this is five times better than human hearing.
Source: lairweb.org.nz

In terms of internal structure and behavior, tiger and lion are almost the same. However, If we talk about size, Tiger is heavier and carries around 200 pounds more weight. So, the tiger has a physical advantage over the lion. Lion is faster than tiger and can run up to 80 km per hour. Another advantage for the tiger is that its claws and canines are longer and sharper than that of the lion and tiger is more agile than lion. According to statistics, Tiger is more powerful than lion. Reportedly, in 2011, a tiger killed a lion with a single paw in Ankara Zoo, Turkey.
Source: smithsonianmag.com, Image: Pixabay

32. On The Verge Of Extinction

Tiger is now in endangered category. Only a few thousands of tigers are remaining in the World. India has the largest population of the tigers; around 2220 tigers live in India. Slightly less than 4000 tigers are alive in the Indian Subcontinent, South China and South East Asian Nations.
Source: blog.wwf.ca

33. Human Is More Dangerous Than Tiger

Now, we have only a few thousands tiger in the world. This is because of human’s intervention in the jungle. Human is logging the jungle and devastating wild animal’s habitat. Human is poaching the wild animals for its own benefit.
Source: downtoearth.org.in

There has been bad blood between Human and Tiger. Until the previous century, the person was awarded if he killed the tiger. Hunting was the hobby and admired sport of nobles, kings, princes, and rich persons. These activities caused decline in the population of Tigers. Human hunted the tiger for its skin and trade in tiger skin increased in the 1960s. In 1977, the skin of the tiger was worth $4,250.
Source: Wikipedia, Image: Wikimedia

35. A Height Of Superstition

Some people in China, Taiwan, South Korea, and Japan believe that Tiger penis soup has medicinal properties. According to them, Tiger penis soup can cure impotency and increase testosterone level in human for the sex performance. They also say that other body parts of the tiger can cure kidney and liver problems and cure various pains in the body. However, no scientific study proves or support such notions.
Source: blog.nationalgeographic.org

36. Not In Circus Anymore

Due to being in an endangered category, several governments banned taking tigers in the circuses. In past, the Tigers along with other wild animals were a great recreation for the human. In 2018, the Indian government posed the ban on all animals in circuses.
Source: timesofindia.indiatimes.com, Image: inhabitat.com, GIF: giphy.com

37. Why Have They Become Man-Eater?

Due to the human involvement in the jungle, Tigers are becoming man-eaters. Tigers of the Sundarbans and Uttrakhand regions of India are notoriously famous for attacking human frequently. Every year, several such cases are reported in the Indian Subcontinent.
Source: Wikipedia

A Champawat (a town in Uttarakhand, India) tigress was the most dangerous man-eater in the history of tiger attacks. It killed up to 436 people before being killed by Jim Corbett in 1911.
Source: walkthroughindia.com, Image: Wikimedia

Tiger has been praised and worshiped for centuries in various cultures. In Chinese culture, Tiger is one of the 12 Chinese zodiac animals. In several Chinese arts, Tiger is depicted as the symbol of earth and equal rival of the Chinese dragon. In many parts of the Vietnam and Laos, tiger is revered creature. In many villages, you may see tiger temples also. In Hindu culture, tiger is associated with Hindu gods and goddesses. In Nepal, tiger festival, ‘Bagh Jatra’ is celebrated.
Source: Wikipedia, Image: Wikimedia

40. Have You Ever Seen Tiger Temple?

Tiger Temple is a Buddhist temple in Thailand. It was founded in 1994 as a sanctuary for wild animals especially tigers. However, in 2017, it was a center of controversy after 40 frozen cubs were found in the temple.
Source: abc.net.au, Image: Wikimedia

21st Century Tiger is a partnership between the Zoological Society of London and Global Tiger Patrol. The partnership was dealt in 1997 with the purpose of protecting tigers within their natural habitats to prevent their imminent extinction.
Source: tigers.org.za

42. A Political Symbol For Centuries

Tiger has been a political symbol of Kingdoms for centuries. It was one of the animals displayed on the Pashupati seal of the Indus Valley Civilisation. Chola dynasty of India made tiger its emblem and depicted it on seals and coins. Tiger is the National Animal of the Republic of India.
Source: Wikipedia

43. Tiger Is An Entertainer Also

Tiger is considered the symbol of thrill and entertainment in the films. Tigers have been shown in many domestic and international films.
Source: ranker.com

Rupinder - June 8, 2016
0
Melbourne, the most populous city of the Victoria state, which is the second most populous state of Australia, second to Sydney, New South Wales. It...