The Italian flag is a tricolor, which features vertical pales of green, white, and red. Italy has a rich history of its flags that have been existed since the 1200s. The current flag has been in use since June 1946. However, the history of this tricolor dates back to the late 18th century when the Cispadane Republic used the horizontal flag of the same colors. Having been inspired by the French Flag, the Italians made a flag characterized by the three bands of equal size falling vertical. To know more, let us know some interesting facts about the Italian Flag. 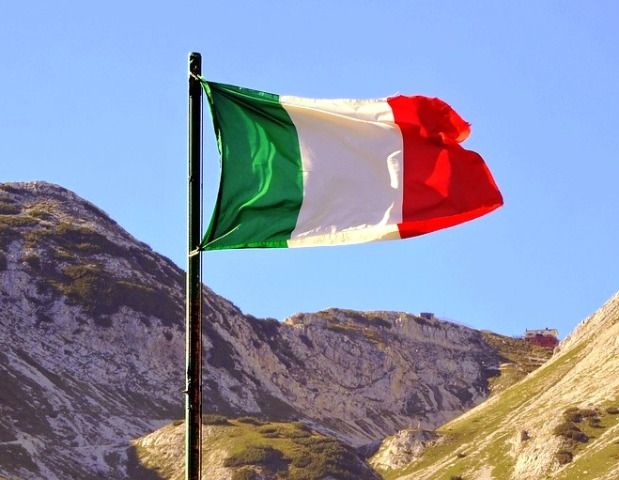 1. The First Adoption of the Flag

The colors of the Italian Flag were adopted in 1796 but did not fly until 1797 when the coat of arms and crown were placed at the center of the flag. It was a horizontal flag and first used by the Cisalpine Republic.
Source: explore-italian-culture.com, Image: markodehaeck.free.fr

2. The First Vertical Flag in Italy

On May 11, 1798, the Cisalpine Republic chose the vertical version of the colors. Thereafter, the flag has been considered the true Italian national flag.
Source: britannica.com

3. Flag changed in the Napoleon Era

When Napoleon Bonaparte occupied the Cisalpine Republic, the flag changed, and the country was called the Italian Republic, which lasted from 1802 to 1805.
Source: Wikipedia, Image: Pixabay

4. When the Republic turned into a Kingdom

After the Italian Republic, the Kingdom of Italy came into existence under Napoleon Bonaparte. In the beginning, the flag also saw some changes i.e., the coat of arms was placed at the center.
Source: napoleon.org, Image: Wikimedia

The Roman Republic was a state which existed for a short period of time in the mid-19th century. The flag of the state matched with the current flag of Italy but at the center, ‘Dio E Popolo’ was written, which means- God and People.
Source: academickids.com, Images: Wikimedia

6. A Flag which unified Italy

When the Napoleonic era ended, the unification of Italy started in the mid-19th century. During this period, the tricolor became a symbol, which united all states under one single state and the single state was called the ‘Kingdom of Italy.’ Some changes also occurred in the flag; Savoyan coat of arms and a crown were placed in the center.
Source: historydiscussion.net, Image: Wikimedia

When the Italian Social Republic (Puppet State of Germany) came into being in 1943, the flag was same, but the army flag changed a bit; an Eagle was in the center of the flag.
Source: britannica.com, Image: Wikipedia

The current flag of the Italian Republic has been in use since June 18, 1946, but it was officially adopted on January 1, 1948.
Source: nsindex.net

9. The Current War Flag is Square

The flag of the Italian Republic is in the ratio of 2:3 but the war flag is 1:1.
Source: Wikipedia

The President of Italy has an official standard. The standard is based on the square flag of Napoleonic Italian Republic. It is hoisted on automobiles, ships or airplanes carrying the President.
Source: quirinale.it, Image: Wikipedia

11. When do they celebrate it?

On January 7, the people of Italy celebrate Festa del Tricolore (the Tricolor Day). Although it is not a public holiday, events take place throughout the country. The official celebration takes place in Reggio Emilia.
Source: allaboutitaly.net

12. These Colors represent Something

The green color represents the hills and the plains in the country, the white represents the snowbound Alps mountains and the red represents the blood spilled by many patriots for the independence and unification of Italy.
Source: allaboutitaly.net

13. When the Prime Minister tried to change colors

The former Italian Prime Minister, Silvio Berlusconi, once tried to change the colors of the flag. The new flag would have a deep green color, white turned to ivory, and red to ruby hues. But, he faced the public backlash in the country and could not do it.
Source: explore-italian-culture.com, Image: Flickr

Shukla Sundeep - June 28, 2016
0
Rocky Mountains or commonly called as Rockies, are the picturesque mountain ranges that stretches from British Columbia in Canada to New Mexico in United...