As Holi is to Indians, Tomorrowland is to Belgians, Burning Man is to Americans; so is La Tomatina to Spaniards. Yes, we are talking about the world’s most famous food fight that happens every year on the last Wednesday of August; since 1945 in Bunol, Spain. Besides being a food festival, La Tomatina has many other things worth knowing. Here are some interesting facts about La Tomatina: 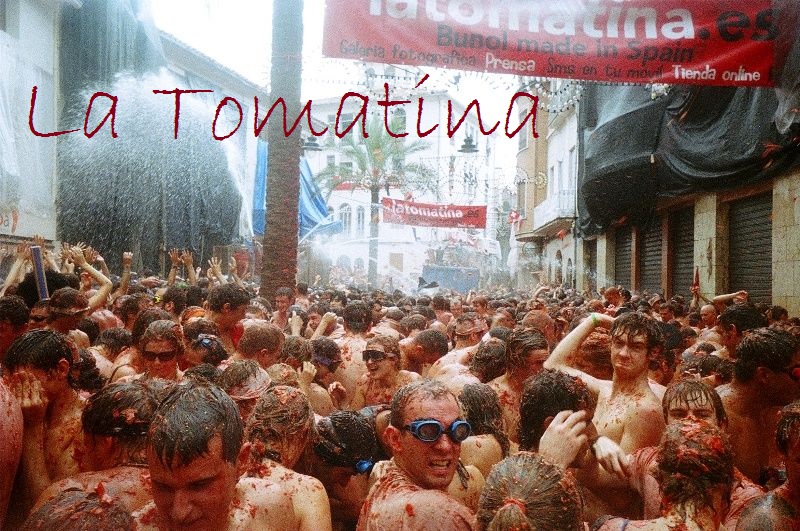 1. It All Started With A Fight

On the last Wednesday of August 1945 when a group of boys attended the Giants and Big-Heads figures parade in the Town Square, one participant’s big head accidentally fell off, and the participant became so enraged that he started hitting everything in his path. A market stall of vegetable had to bear the brunt of the crowd; people started pelting each other with tomatoes. The following year, a group of boys organized a pre-planned tomato fight, and since then, the festival has become an annual tradition in the small Spanish town of Buñol near Valencia.
source: latomatinafestival.wordpress.com

There are two strict rules to be followed while enjoying La Tomatina- throw only squashed tomatoes and do not throw anything other than a tomato
source: cnn.com, GIF: gfycat.com

On The day of La Tomatina, Buñol’s population swells from just 9,000 to about 30,000. Keeping this in mind, the authorities decided to allow only paid ticket holders to enter the town; since 2013.
source: latomatinatours.com, Image: latomatina.info

4. When The Festival Was Banned

After many complaints about spreading a nuisance, La Tomatina was banned in the early ’50s.
source: barcelona-life.com

As a sign of protest, a tomato burial parade was held in August 1957. A music band played funeral songs with residents carrying a coffin with a huge tomato. La Tomatina finally became an official festival after the huge success of the parade.
source: aesu.com, GIF: ticketstomatina.com

6. La Tomatina Around The World

La Tomatina became so popular that other countries including Colombia, China, and Costa Rica started hosting this fun festival. Interestingly, it was banned in Bangalore, India after being condemned as “wastage of food.”
source: worldatlas.com, Image: Pexels

7. Not Just A Tomato Festival

8. Pull The Ham And Start The Festival

The festival starts after any enthusiastic participant climbs the greased wooden pole known as Palojanon and pulls the ham, which hangs on the top.
source: festivalsherpa.com, Image: Flickr

In August 2015, the festival was acknowledged by the Internet giant Google by making a Google Doodle of La Tomatina.
source: theculturetrip.com, GIF: Google Archives

11. Hats Off To Firefighters

Firefighters wash the town and people with the hoses to clean the mess, once the fight ends. Thanks to the disinfectant property of tomatoes, the city looks clean.
source: food.ndtv.com

12. Attend The Tomatina Festival & Get A Glowing Skin

Yes. You read that right. Going to La Tomatina can restore glow to your dull skin; as tomatoes are high in potassium and vitamin C.
source: food.ndtv.com, GIF: travelnoregrets.com

13. When The Festival Caused A Soar In Tomato Price

In 2016, absoluta moth destroyed over 80% of tomato crop in Nigeria. When Spaniards were busy celebrating the festival, the price soared from $1.20 to $40, which made Nigerians furious. They thought it the wastage of red fruit.
source: cnn.com

You can paint your entire city red with this amount of tomatoes used in La Tomatina.
source: bbc.co.uk, Image: Wikimedia

Plan well in advance whom do you want to target as you have only an hour to imbibe the flavors of La Tomatina. The Festival lasts from noon to 1 pm.
source: latomatinatours.com, GIF: gfycat.com

For one intense hour, the streets of Buñol become a sea of red; with half-naked people winning and losing against friends and strangers.
Source: dawn.com, GIF: makeagif.com

18. Beware Of The Acidity

While participating in the Tomatina festival, beware of the acidity of the tomatoes; as it can sting and redden your eyes; so, protective goggles are advised.
Source: rte.ie