Montana is the fourth largest and one of the nine Mountain States in the Northwestern region of the United States. It boasts of numerous rivers, diverse flora and fauna, myriad terrains and ever-changing climatic conditions. Listed below are some lesser-known facts about this land of natural beauty. 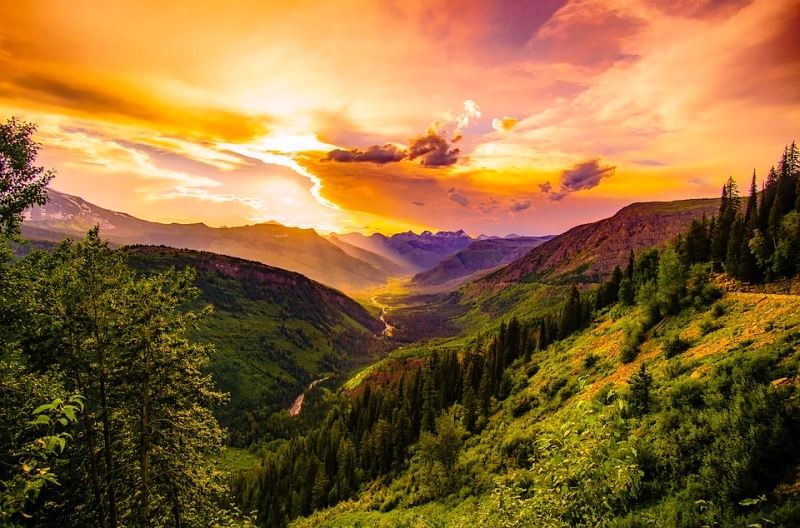 Montana is a Spanish word for mountain and the earliest Spanish settlers had named the state ‘Motaña’. It is one of the nine mountainous states in the Western United States and is home to 64 mountain ranges.
Source: Wikipedia, Image: goodfreephotos.com

Butte, Montana was once referred to as the ‘Richest Hill on Planet Earth’, because of its rich mining history. It had abundant reserves of copper and also gold and silver. It is no longer the richest hill due to repeated mining expeditions over the decades. Agriculture and mining are also the most imperative and most revenue-generating industries in Montana.
Source: cnet.com, Image: Flickr

The motto of the state is ‘Oro Y Plata,’ which is a Spanish word for gold and silver. This motto was taken from the immense reserves of the two precious metals in the state. Gold was first discovered in the year 1852 in Montana.
Source: Wikipedia, Image: Wikimedia

Montana is a state of very low population density. Out of its 56 counties, 46 are considered as Frontier Counties, which means 6 people or less per square mile. It is the fourth-largest state in terms of area, the eighth least populous and the third least densely populated state in the United States.
Source: Wikipedia, Image: Wikimedia

Montana is known with several nicknames apart from its original name including ‘The Big Sky Country’, ‘The Treasure State’, ‘Land of the Shining Mountains’, and ‘The Last Best Place’. Although, none of these names are official names of the state yet.
Source: Wikipedia, Image: Wikimedia

A Triple Divide is a term used for a point on Earth’s surface, where 3 drainage basins meet. North America has three triple divides and one of those is a popular feature of the Glacier National Park, Montana. Water from this peak flows into the Pacific Ocean, the Atlantic Ocean, and Hudson Bay.
Source: editions.lib.umn.edu, Image: Wikimedia

7. A Haven to The Grizzly Bear

The Grizzly Bear also referred to as the North American Brown Bear, is the state animal of Montana. This is a large population of brown bears in North America. An estimated 1500 Grizzly Bears exist in the lower 48 states of the US and the state of Montana is home to about 800 of them.
Source: Wikipedia, Image: Wikimedia

8. A Flower that Regenerates from Dead Roots

Bitterroot (Lewisia rediviva) is the National Flower of Montana. It was selected as Montana’s State Flower in the year 1895. ‘Rediviva’ refers to the ability to regenerate from dry and dead roots, which is a characteristic of this flower. The Bitterroot Valley and the Bitterroot river between the Bitterroot Range and Sapphire Mountains are located in Southwestern Montana.
Source: theflowerexpert.com, Wikipedia, Image: Flickr

Montana boasts of 10 National Forests, and these add up to 193 million acres of wildlands in the state. These forests are responsible for about 61.3 percent of Montana’s annual water supply.
Source: wildmontana.org, Image: Flickr

The Yogo Sapphires also known as the Montana Sapphires are considered as the most exquisite and finest Sapphires in the world and they are found only in Montana. This is also the only North American gem to be placed in the Crown Jewels of the United Kingdom.
Source: Wikipedia, Image: Wikimedia

Montana is home to the most diverse species of mammals than any other state in the United States. There are more than 100 big and small distinct species of mammals found in the state such as the Elk, Bighorn Sheep, Caribou, Mule Deer, Raccoons, Jumping Mice, Bobcats, etc.
Source: Wikipedia, glaciermt.com; Image: Flickr

Montana has the largest population of the migratory Elk herd in the United States. Each winter, approximately 15000-20000 Elk’s migrate from Wyoming to Montana.
Source: www.americanprofile.com, Image: www.pixabay.com

Montana sees heavy snowfall during winters. Between November to March, the minimum temperature can go up to minus fifty degrees. In the year 1887, a fifteen-inch wide snowflake fell on the Army Post at Fort Keogh in Montana and so far, it is the largest ever snowflake to be recorded in history. There is also a record in the Guinness Book of World Records for the same.
Source: www.worldatlas.com, Image: Flickr

The Yellowstone National Park is the first-ever national park to be established in the United States. It was established in the year 1872 by the U.S. Congress. It consists of broad volcanic plateaus and three mountain ranges, namely the Gallatin Range, the Absaroka Range, and the Teton Range and all three are aligned roughly north to south. The park also has atypical geothermal features which include hot springs, geyser basins, fossil forests, eroded basaltic lava flows, a black obsidian mountain, and odd erosional forms.
Source: www.britannica.com, Image: pixabay.com

The geothermal areas of the Yellowstone National Park include several geyser basins. According to a 2011 study, about 1,283 geysers have erupted in Yellowstone, out of which 465 remain active during an average year. One such hot spring is the Morning Glory Pool located in the Yellowstone Upper Geyser Basin. The original name of the pool was Convolutus, the Latin name for the morning glory flower, which the pool’s blue color resembles. The distinct color of the pool is due to the bacteria that inhabit the water.
Source: Wikipedia, Image: Wikimedia

Yellowstone National Park is also one of the most tectonically active areas in the United States. Each year about 700 to 3000 earthquakes occur in the park and most of them are not even felt. These earthquakes are a result of the geothermal environment and active volcanic conditions of the park. In real, the earthquakes help in maintaining the hydrothermal activities of the park, as without them, the hot water springs and geysers of the park might get sealed because of mineral depositions.
Source: www.nps.gov, Image: Wikimedia

The River, Roe is the shortest river in the world. It is 201 feet long at its constant point and runs between Giant Springs and Missouri River near Great Falls, Montana. It was recognized by the Guinness Book of World Record’s for the ‘Shortest River in the World’ but the category was later removed by Guinness following a dispute.
Source: Wikipedia, Image: Flickr

Montana is home to twelve Indian tribes, living on seven reservations and together they constitute about six percent of Montana’s population. Each of the twelve tribes has unique customs and traditions and they celebrate their cultures through dance, songs, games, language, and religious ceremonies. These seven reservations are Crow, Northern Cheyenne, Fort Peck, Fort Belknap, Rocky Boys, Blackfeet, and Flathead.
Source: www.montanakids.com, Image: Flickr

At 3904 meters above sea level, the Granite Peak is the highest natural point in Montana and it is also the tenth highest point in the United States. It is located in the Beartooth Range in the Northern Rocky Mountains and is considered as one of the most difficult ranges amongst the 50 high points in the states. It gets its name because of the large chunk of granite towering over Southern Montana.
Source: www.summitpost.org, Image: Wikimedia

Montana is the fourth largest state of the United States by area. It can easily fit in Virginia, Maryland, Delaware, Pennsylvania, and New York within its borders and still have room for the District of Columbia!
Source: www.medprodisposal.com, Image: Wikimedia

The Glacier National Park is located in Northwestern Montana, on the Canada-United States border. It is popularly known as the ‘Crown of the Continent’ and does complete justice to its name. The park encompasses two mountain ranges, has two hundred and fifty lakes in its boundaries and is home to innumerable species of flora and fauna. The park is a popular tourist destination and is used for a variety of leisure and recreation activities.
Source: Wikipedia, Image: Flickr

Going-to-the-Sun Road is a picturesque mountain road in the Glacier National Park. This is the only route that traverses the park crossing the Continental Divide through Logan Pass at an elevation of 6646 feet, which is also the highest point on the road. The road is one of the most difficult roads to snowplow in North America during the spring and is also the first road to be registered under the National Historic Place, National Historic Landmark, and Historic Civil Engineering Landmark categories. This route is also considered one of the most scenic drives in the country.
Source: Wikipedia, National Geographic, Image: Wikimedia

The word ‘Makoshika’ is derived from the Lakota phrase ‘Maco Sica’, which typically means ‘bad land’ or ‘bad earth’. The Makoshika State Park is the largest state park of Montana, spread over 11000 acres. This park’s characteristic badlands are made up of fossils of the Tyrannosaurus Rex and the Triceratops, dinosaurs. Even though this park is termed as a badland, but it is a paradise for archeologists and explorers.
Source: www.stateparks.mt.gov, Image: Wikimedia

Montana has seen a record-breaking 103 Degree swing in temperature within 24 hours between 14 and 15 January 1972. Loma, Montana recorded a change of -54 to 49 Degrees Fahrenheit, within those 24 hours. This was caused due to dueling blasts of air and was one of its kind phenomenon in Montana.
Source: www.popsci.com, Image: Flickr

26. The Battle of the Little Bighorn

The ‘Battle of the Little Bighorn’ also known as ‘Custer’s Last Stand’ or the ‘Battle of the Greasy Grass’ happened in the year 1876 near the Little Bighorn River. It was a clash between the 7th Cavalry Regiment of the United States Army and the united forces of Lakota, Northern Cheyenne, and Arapaho tribes. The battle resulted in the defeat of the US Forces and to date, it is regarded as the most prominent event of the Great Sioux War of 1876.
Source: Wikipedia, Image: Wikimedia