Popularly known as the “Empire State” or “The Big Apple,” New York City is a multi-cultural metropolis and a home to many famous and talented people. Millions of visitors flock annually to experience the city first hand. New York City has changed considerably over time, from its primitive State as a forest to the present city of skyscrapers. It is interesting to know the stories about this Grand City, which has made it the finest city on the planet. Here’s a roundup of some interesting facts about New York- the City of Dreams:

1. When Manhattan Was Sold! 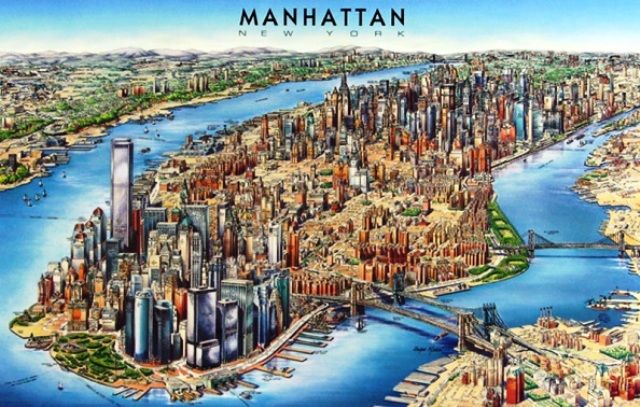 Do you know the cost of the world’s costliest location, Manhattan? It’s just $24. Well, don’t get excited, it was way back in 1626 when the Dutch explorer Peter Minuit bought the island of Manhattan by the Lenape Native Americans for trinkets and tools worth $24 ($1,000 in modern currency).
Source: thirteen.org, Image: newyorkcitymoversnyc.com

There are vaults located 80 feet beneath the Federal Reserve Bank, which holds about 25 percent of the world’s gold bullion. Unfortunately, it doesn’t belong to the NY Fed or the residents; it simply guards the gold on behalf of the US Government and other financial institutions.
Source: bigappled.com, Image: untappedcities.com 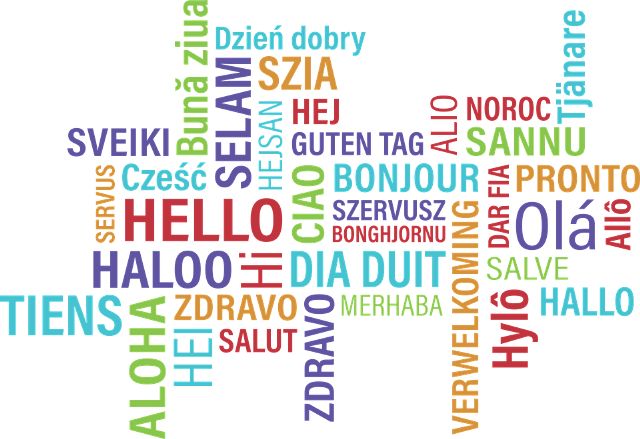 New York is truly the melting pot of the world; substantial percent of its residents are foreign-born. NY is a multi-culture metropolis with 800 languages making it the most linguistically diverse city on the earth.
Source: businessinsider.in, Image: concordialanguagevillages.org

5. City Cowboys at the Death Avenue 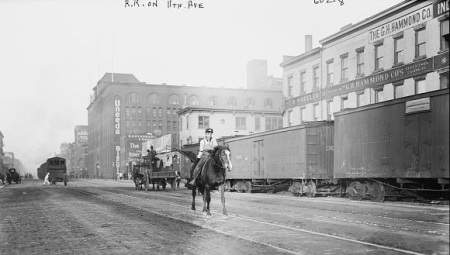 Yes! New York City used to have cowboys and not just the one at Times Square. New York cowboys used to wave red flags and lanterns to warn pedestrians about the street-level freight trains at the Eleventh Avenue, which was known as the “Death Avenue” because of the danger. In 1934, the street-level trains were replaced by the High Line.
Source: newyork.com, Image: ephemeralnewyork.files.com

When there is snowfall in New York, it probably becomes the world’s most beautiful city. Although New York may be the “City that never sleeps,” at times it can be brought to a standstill, and its cacophony hushed, by a blanket of snow.
Source: thestarryeye.typepad.com, GIF: giphy.com 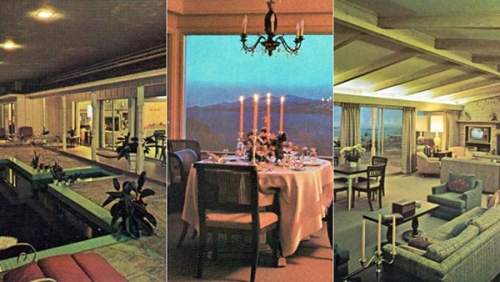 Well, it’s a very secret fact, which is, in fact, an open secret, that New York is home to a luxury bomb shelter; buried three feet under the Flushing Meadows Park in Queens, NYC.
Source: dailymail.co.uk, Image: oddee.com

In NY you don’t need to duck into some dark den to get a glimpse of skin- it is perfectly legal for women to walk around topless in New York City. The New York Supreme Court, in 1992, altered penal law 245.01; allowing women to go shirtless as men do. Every year, the City celebrates “Go Topless Day.” Now, that’s called gender equality…!!!
Source: timeout.com, GIF: i.pinimg.com 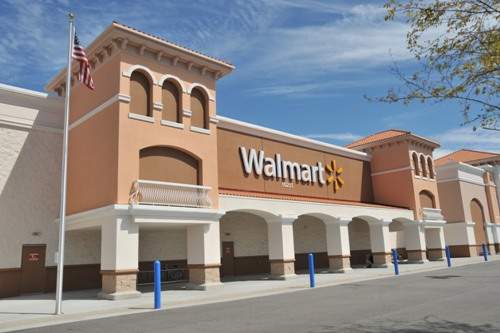 Walmart, the nation’s largest retailer had no outlets in the City before 2018, which has faced resistance from labor groups and their political allies every time it has proposed opening a store in the City. However, in September 2018, Walmart finally found a foothold on a bank of the Bronx River, below the roar of the Bruckner Expressway.
Source: nytimes.com, Image: Flickr 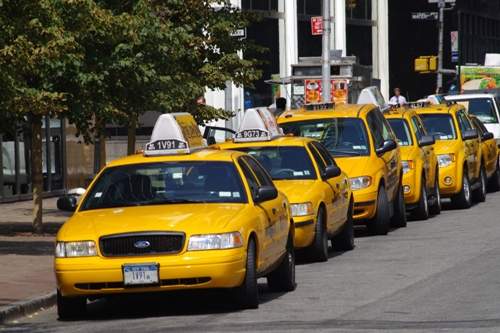 Dreaming of working as a taxicab driver in NY? You’d need a fortune just to score a medallion. As of 2014, it will cost over a million bucks, $1,400,000 approximately for an independent medallion.
Source: newyork.com, Image: wikimedia.org

The popular tabloid New York Post established in 1801 is the oldest newspaper in New York City. Though it started out conservative, it went on to support Lincoln, oppose slavery and champion Reconstruction. The 20th century, nonetheless, saw it go tabloid and turn traditional again.
Source: history.com, Image: dailycaller.com

NY City certainly has a lot of hidden gems, and one such gem includes the beautiful gardens hidden hundreds of feet above the ground. Rockefeller Center had five eye-catching roof gardens that have been closed since 1938. One of the gardens was shown in the Spider-Man movie.
Source: nycgo.com, Image: Wikimedia.orgt

13. Remnants of the Berlin Wall

Midtown Plaza at 520 Madison Avenue holds an amazing piece of history. At first glance, this artifact appears to be just another public mural but actually is five sections of the Berlin Wall nestled here since 1990.
Source: nycgo.com, Image: wikimedia.org

14. To Run a Food Stand: Not Everybody’s Cup of Tea 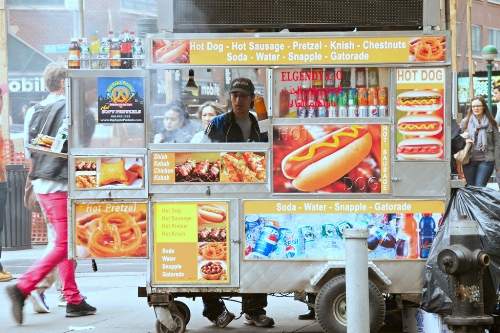 Who doesn’t love to grab a bite of that yummy hot dog from the hot dog truck after having a stroll in the park? New York City has 4000 street food vendors offering mouthwatering hot dogs, pretzels, falafel, kebobs, and more. But the fact is that it can cost over $289,000 for a one-year hot dog stand permit in Central Park.
Source: bigappled.com, Image: Flickr

The Statue of Liberty was a gift from France to honor the United States’ dedication to freedom and democracy and of the alliance formed during the American Revolution between the two countries. The Lady Liberty has since then, been the pride of NYC but the fact is that the underwater portion of Liberty Island, where it sits upon, is part of New Jersey, not New York.
Source: history.com, GIF: giphy.com

16. The Battle For Sunlight

The natural light has always been in short supply in the City of Skyscrapers. The City has been battling for the adequate sunlight ever since the vertical buildings, defying the height, have been erected on the island of Manhattan.
Source: citylab.com, GIF: giphy.com

The gloomy hum rises through the subway grate in Times Square, which is usually attributed to a generator or some other NYC Transit equipment, but as a matter of fact is an art installation by sound artist Max Neuhaus. It has been operating since 1977 at intervals.
Source: hyperallergic.com, Image: Flickr 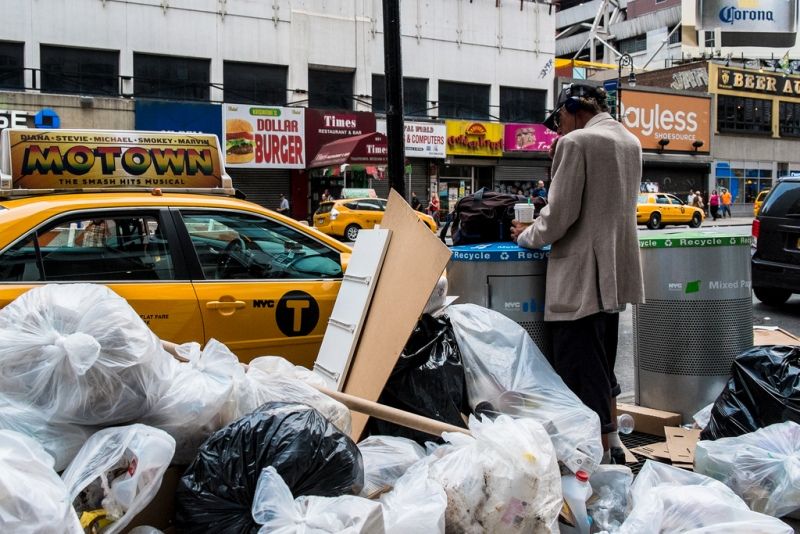 For the past 35 years, New York City has had a vacuum-driven garbage-collection system in some parts that actually sucks trash through pipes under the streets to collect it at a central disposal location.
Source: theguardian.com, Image: Flickr

In NY, having a pizza slice may cause concern to your pocket; as the price of a pizza slice is literally equal to the cost of a subway ride for 50 years now. Financial analysts have named it “The Pizza Principle.”
Source: nypost.com

Well, for those who believe that the Dead Rabbits and other gangs mentioned in the film “Gangs of New York” was fiction, it might come as a surprise that those were real gangs of New York, which operated during the 19th century. Before becoming a crime-free State, the city from the late 70s to the early 90s suffered a horrifying reputation for the crime which was used as a backdrop for the movie.
Source: midmanhattan.com, GIF: giphy.com

21. Witness the White House on the Brooklyn Bridge

22. A Haven to Pizza Lovers

If there is a food that screams New York City from the top of the Empire State Building, that’s pizza. We all know how the New Yorkers love pizza, but the city also has an exclusive tour dedicated to the history of pizza in NYC.
Source: gypsynester.com, GIF: giphy.com

We all know that NY is home to some of the most beautiful parks in the world, but after 2018 it will also be the only city in the world having an underground park.
Source: thelowline.org, Image: Wikimedia

24. The Most Populous City

As NY is a leader in almost everything from finance to culture and communications; with strong manufacturing and shipping sectors, it also tops when it comes to the population. With a population of 8,622,698 (as in March 2018), New York City (NYC) is the most populous city in the United States.
Source: nytimes.com 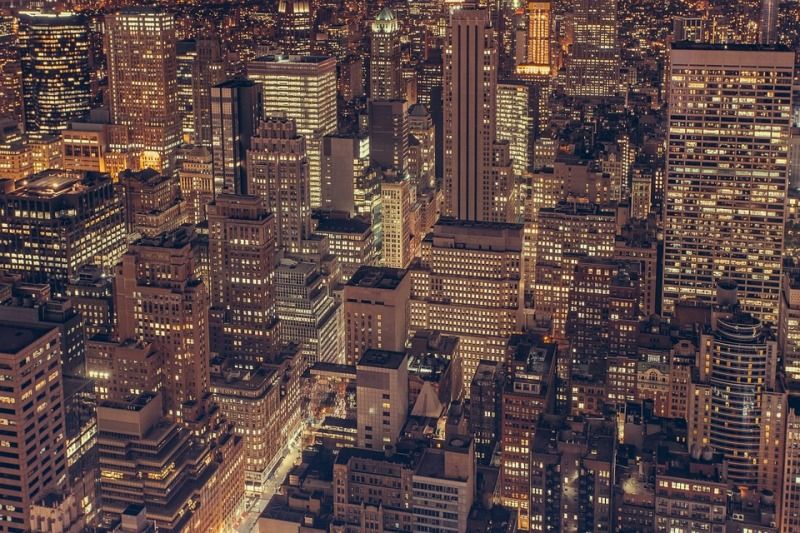 27. Capital of The United States!

Due to the fast-paced lifestyle of New York City, it has been given the term “New York Minute.” Well! New Yorkers move fast. Really fast.
Source: merriam-webster.com, GIF: nycgo.com 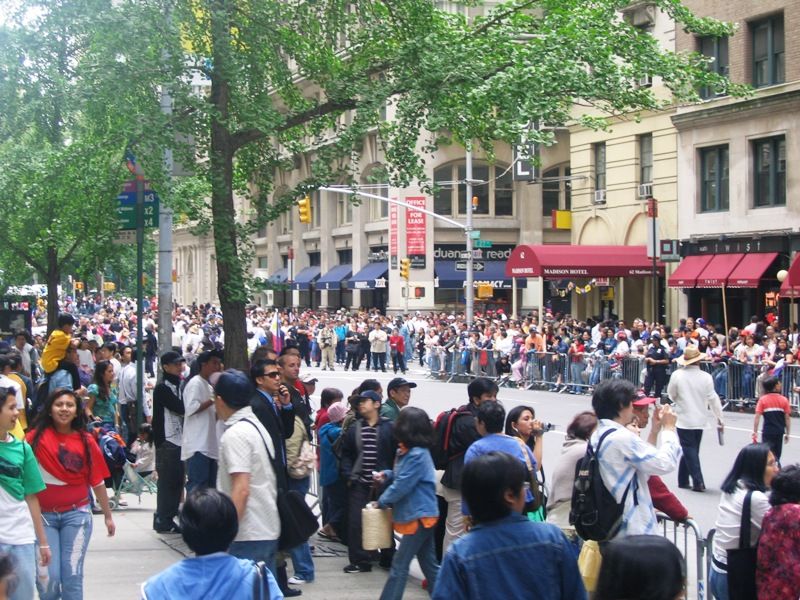 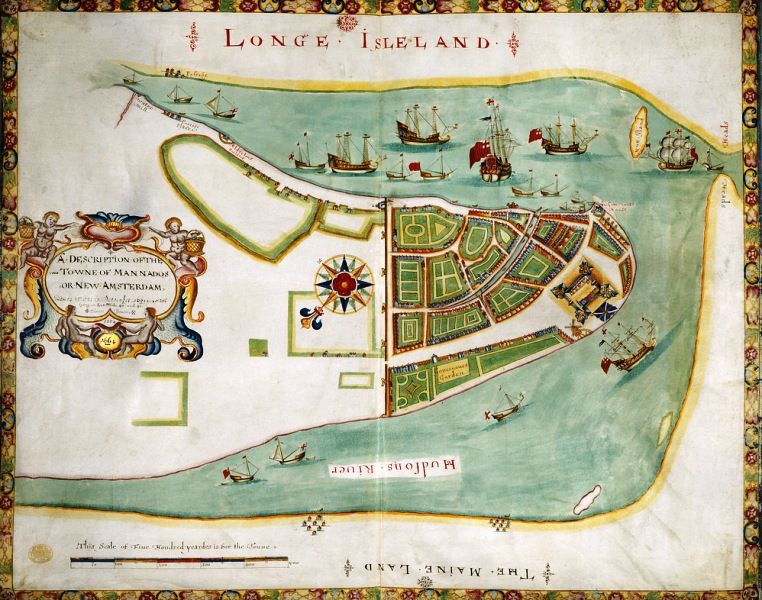 Well! Before the City came under the English control in 1664 and was given the name “New York,” the area was known as “New Amsterdam.”
Source: u-s-history.com, Image: Flickr

New York City has many well-known landmarks, and according to a survey in 2013, three of the world’s top ten most visited tourist attractions are in New York City, i.e., Times Square, Central Park, and Grand Central Terminal.
Source: travelandleisure.com, GIF: nycgo.com

Several sources have ranked the City of New York as the most photographed city in the world.
Source: nbcnews.com, GIF: tumbler.com

The hourglass-shaped patch of New York City, known as Times Square, is considered by several sources as “the heart of the world.” On Times Square’s busiest days, more than 460,000 pedestrians pass through the area.
Source: nytimes.com, GIF: tumblr.com

With the average price of $4,100 per square foot, Manhattan’s real estate market is among the most expensive in the world.
Source: forbes.com 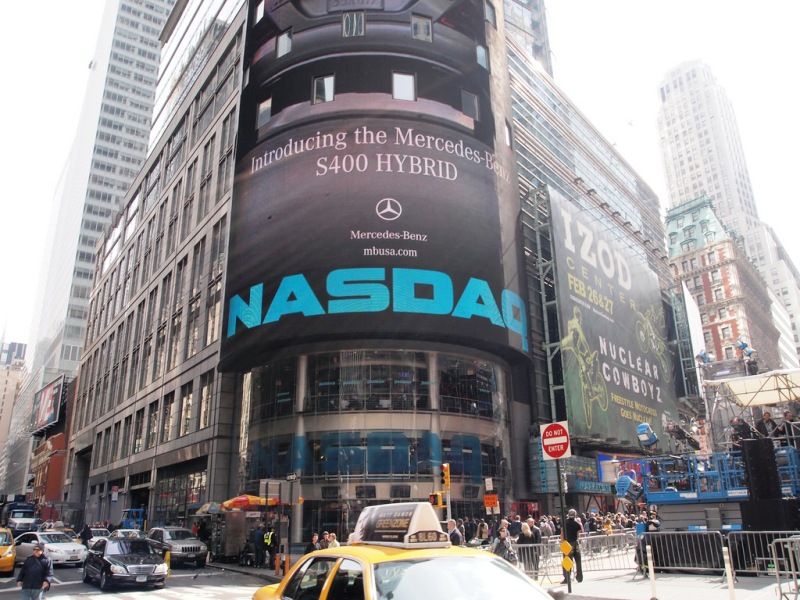 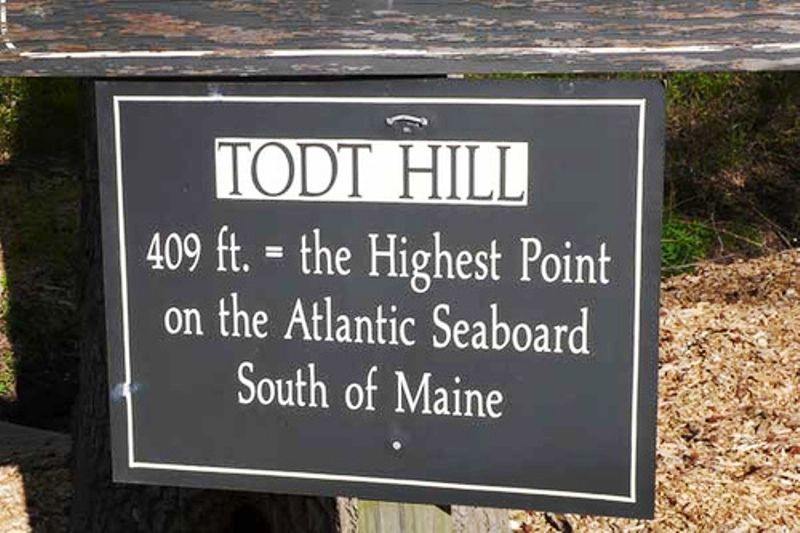 Hundreds and thousands daily flock the New York City from the neighboring as well as far-flung States. Nicknamed as the City of Dreams, New York is considered the largest and most diverse city in the world. The City contains everything for every age group; whether it’s the education, tourism or the nightlife, you would never get tired of enjoying the City. In fact, it is said that “There is something in the New York air that makes sleep useless.”
source: nytimes.com, GIF: tumblr.com

Krishna - April 28, 2017
0
Located in the Bloomsbury area of London, British Museum is hugely devoted to the rich human art and history, this museum is nation’s most...