The New York State Flag is one of the most popular state flags in the United States. On going back to its history, it reminds us two years; 1778, when its coat of arms was adopted and 1901 when the flag was adopted. The flag is predominantly dark blue in color and the state coat of arms is in middle. The coat of arms was first used as the revolutionary war flag. Let us know some more interesting facts about the New York state flag. 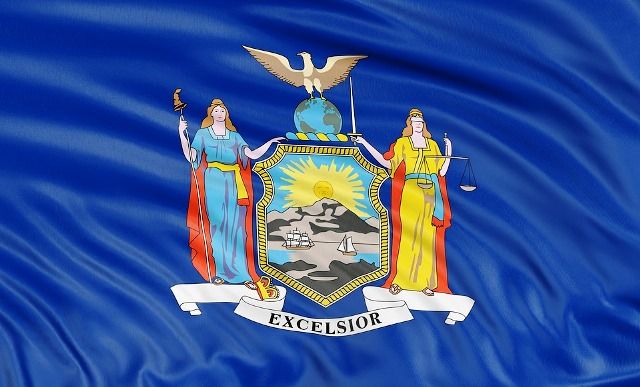 1. Adoption Of Coat Of Arms

The coat of arms of the state was adopted by the state legislature in 1778 and was placed at the center of the flag.
Source: statesymbolsusa.org

2. Two Supporters In Coat Of Arms

The coat of arms shows a masted ship and a sloop on the Hudson River. It also displays the three mountain range and the Sun rising behind them. The shield has two supporters; Liberty and Justice. The left supporter has a Phrygian cap raised on a pole. Her left foot crushes a crown that shows freedom from the British monarchy that once ruled New York as a colony. The right supporter is blindfolded, represents justice. It is holding a pair of scales in one hand and sword in other and also represents fairness.
Source: Wikipedia, Image: Wikimedia

Beneath the coat of arms, there is a ribbon on which the state’s motto is written in the Latin language, “Excelsior” means Ever Upward.
Source: netstate.com

4. Bald Eagle Above The Globe

On the top of the shield, a bald eagle is sitting on the globe. The globe is displaying Western Hemisphere.
Source: 50states.com, Image: Wikimedia

5. Early Flag Of The State

From 1896 to April 2, 1901, the state used a flag with the same coat of arms but the different background color; it was buff (pale orange-brown).
Source: crwflags.com, Image: Wikimedia

6. Great Seal Of The State Of New York

In 1778, the great seal was also adopted along with the coat of arms.
Source: britannica.com, image: Wikipedia

The flag of New York is ranked at 34th place among all states flags.
Source: thrillist.com