Poodles are a type of dog breed, which make a unique impression on us than the other dog breeds. It is considered one of the most recognizable and versatile dog breeds. The Poodle is a renowned gun dog and is identified by the American Kennel Club as a non-sporting breed. The German word Pudel, or Pudelin, depicts to splash in the water. And in French, Poodles are called Caniche, that means duck dog. This is how they got their name. Besides being one of the cutest dogs, Poodles have many other things worth knowing. Let’s have some interesting facts about Poodles: 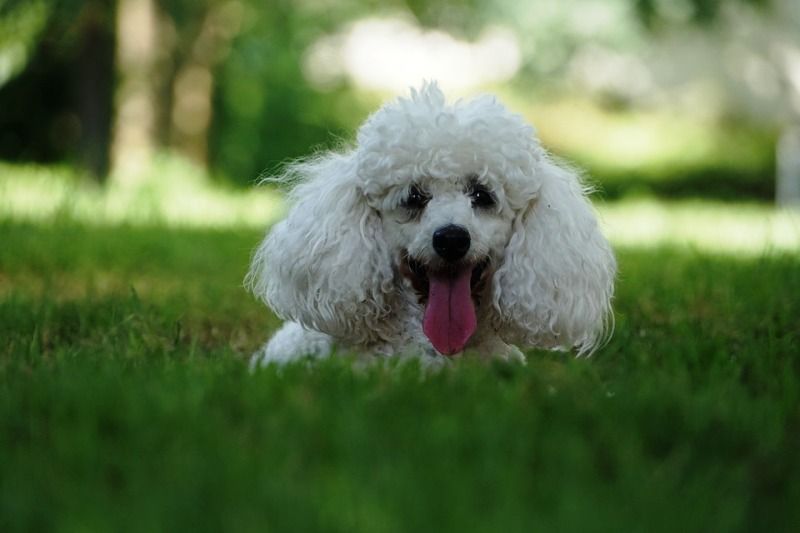 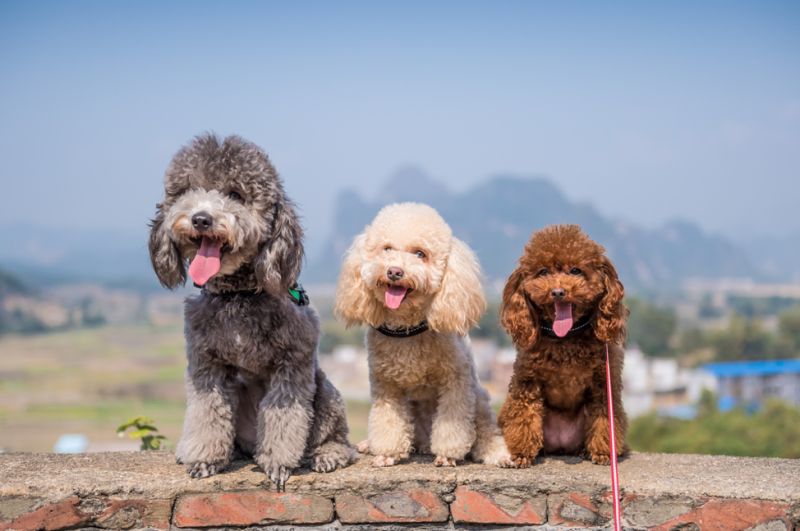 The cute Poodle has been categorized into three main categories namely-

2. One Poodle: Many Names

The scientific name of the breed is ‘Canis lupus familiaris.’ However, the Standard Poodle is also known by the names; Caniche, Barbone, Chien Canne, Grosse Pudel, and the French Poodle. 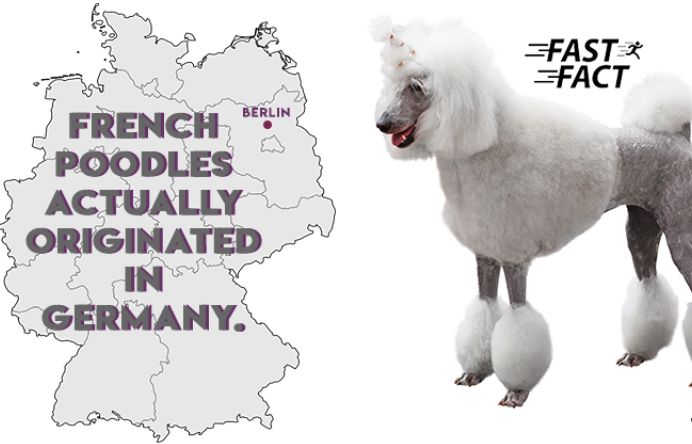 Many French paintings showcase Poodles, and it is believed that poodles had their origin in France. But few argue that they have their origin in Germany. According to the American Kennel Club, Poodles originated in Germany where they used to serve as a water retriever.
Image: positivities.com

In the old days, these were used by hunters as a retriever while hunting waterfowl. At times, they were used as a truffle seeking dog. With time, the intelligence of this breed unveiled, and the French started using them in the circus. At one point in time, Toy Poodles were considered a status symbol.
GIF: giphy.com

Poodles have long-straight muzzles and long hanging ears. Some of them have docked tails while other’s don’t.
GIF: giphy.com 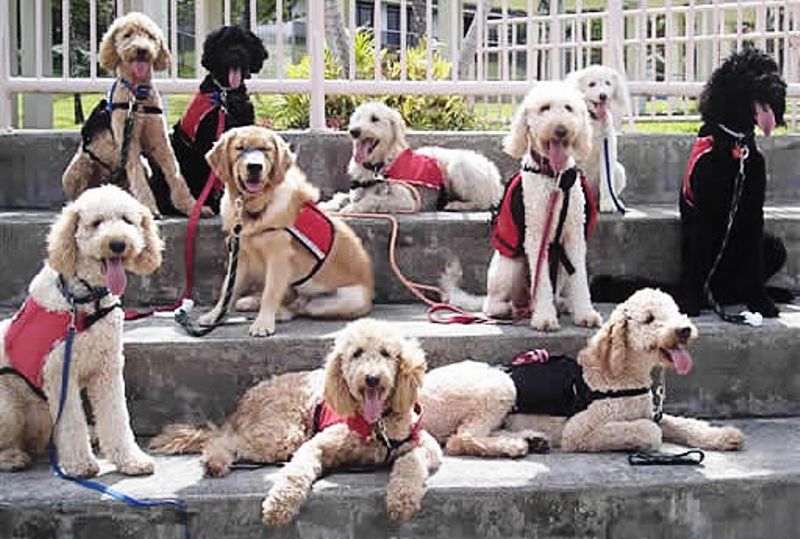 The breed is extremely elegant, friendly, and clever. Poodles are impressive dogs, they are considered as one of the most intelligent dog breeds.
GIF: i.pinimg.com

These are highly adaptable to climatic changes, they fit well in cold as well as in hot climatic conditions. They can adjust themselves in an apartment to even in a small one-room house. They are highly sensitive and can not survive in aloofness.
GIF: mandatory.com 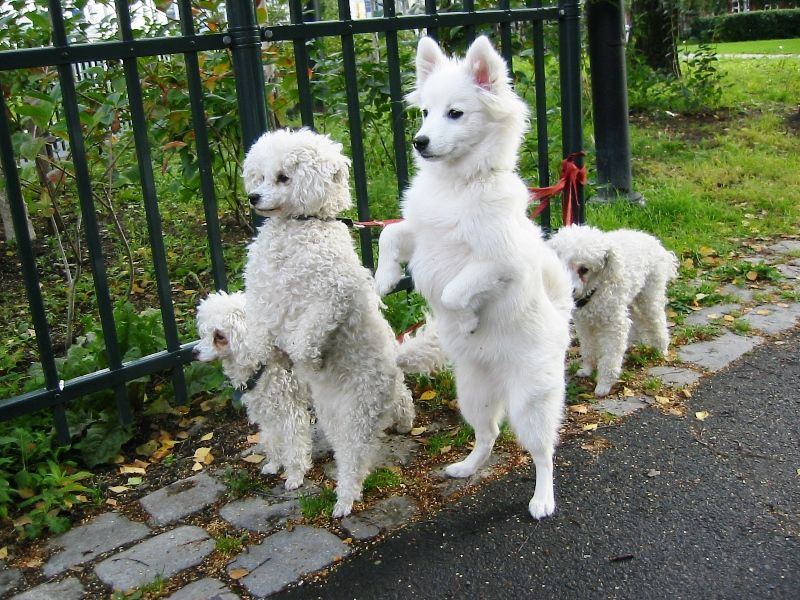 Unlike many other dog breeds, which are slow learners, these beautiful and intelligent Poodles can be easily trained. They have a very high energy level thus they must be taken for regular walks and exercise. They love to play with kids and feel joyful.
Image: Wikimedia

11. Obedience Training is Must 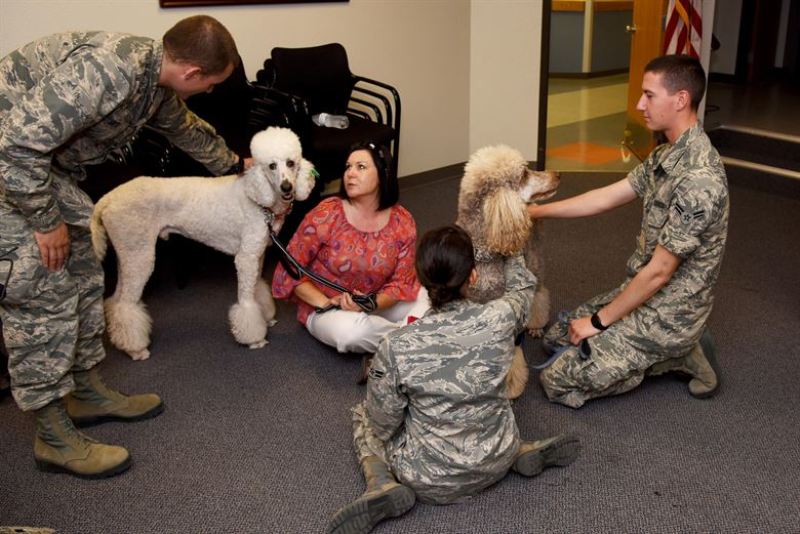 Obedience training is found to keep Poodle’s mind active in a positive manner. A Poodle who is constantly thinking and is following a learning process never gets bored and therefore, does not indulge in destructive activities.
Image: defense.gov

12. A Personality Full of Adjectives

Intelligent, loving, loyal, and mischievous are the four best suitable adjectives to describe the personality of Poodles.
GIF: giphy.com

They are generally healthy, but the most common diseases to which they are prone are- hip dysplasia, elbow dysplasia, hypothyroidism, von Willebrand’s disease, cataracts, progressive retinal atrophy, runny eyes, skin conditions, allergies, and ear infections. Some advanced diseases include Addison’s Disease and Gastric Dilatation-Volvulus.

Brush their teeth at least two or three times a week to avoid tartar buildup and the bacteria that can lurk inside. If your Poodle allows, you may go for their daily brushing to prevent gum disease and bad breath.
GIF: buzzfeed.com

Poodles are exceedingly sensitive to the tone of the owner, thus, it becomes important to be firm but not harsh with them.
GIF: giphy.com 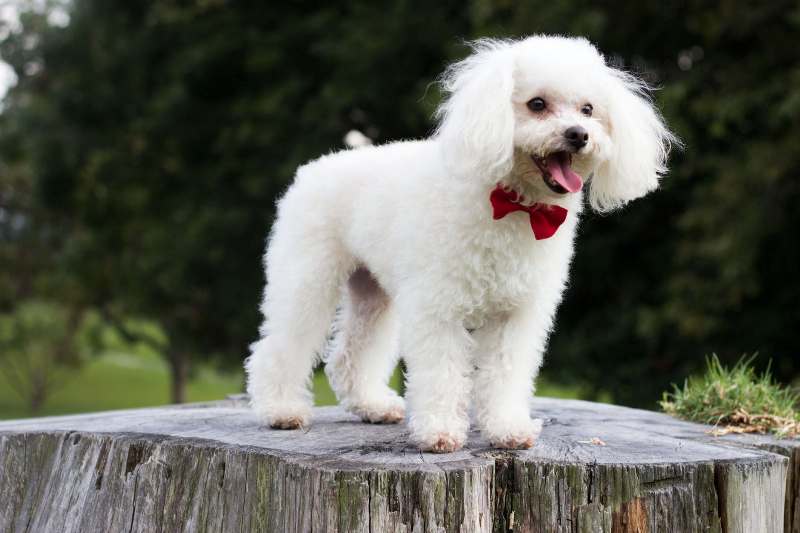 The poodles have a very fascinating haircut. No, they are not fashion-freak! It is because the dog has to swim in very cold water, and their excessive hair makes it difficult for them to swim. Thus, the coat is left only on those body parts which need protection.
GIF: giphy.com

20. The Die-Hard Lover of Poodles 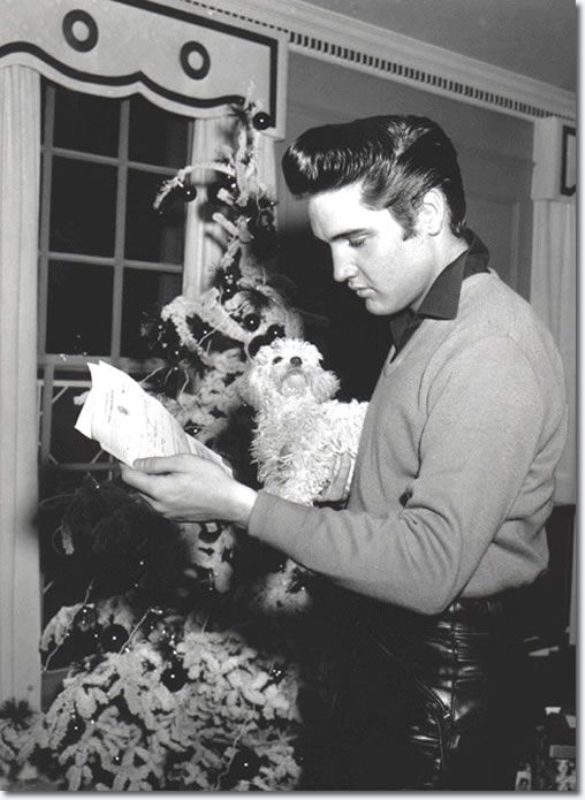 Elvis Presley loved Poodles a lot. He owned lots of Poodles and used to present them to the women he loved. He gifted his mother a Poodle named ‘Sweet Pea.’
Image: thepoodleanddogblog.typepad.com 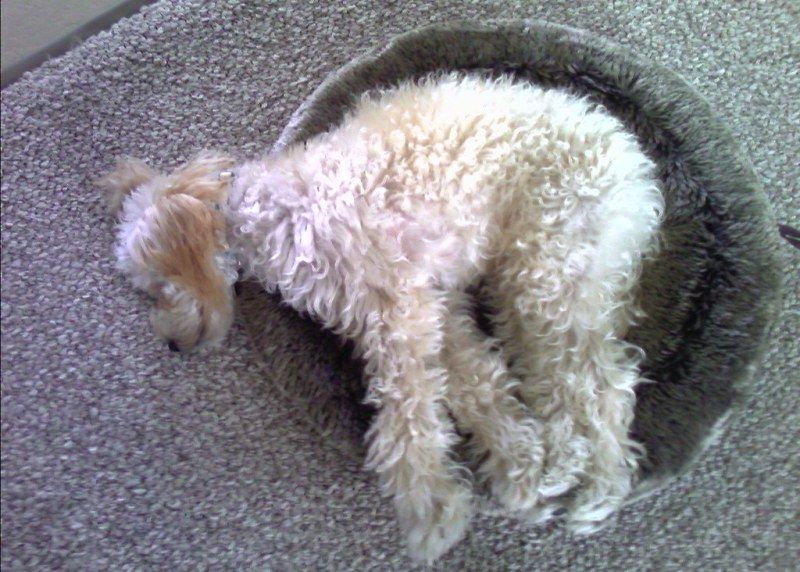 Poodles are fond of sleep. They need at least a 13-hour of sleep a day to feel fresh. Anything less than this makes them mentally lethargic.
Image: Flickr 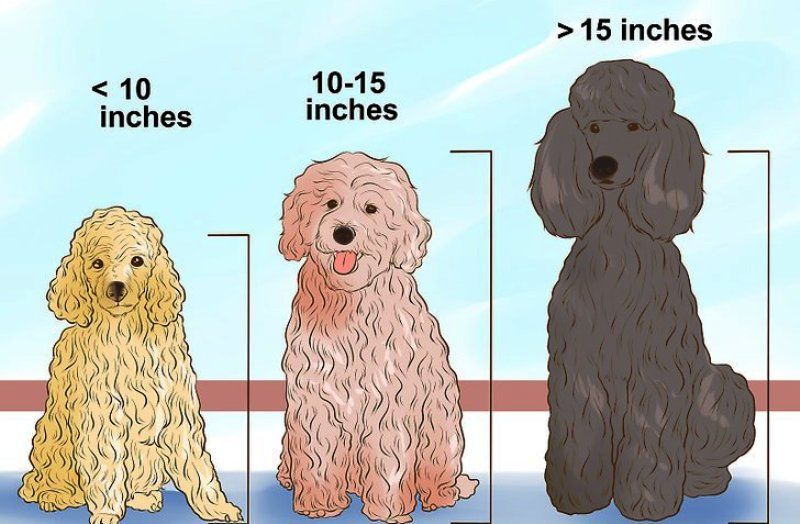 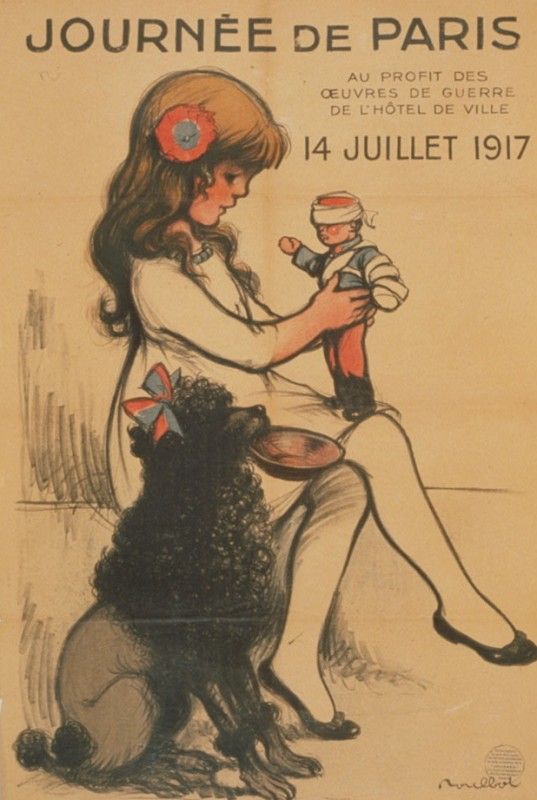 Although Poodles most likely originated in Germany, they are considered the National Dog of France.
Image: picryl.com 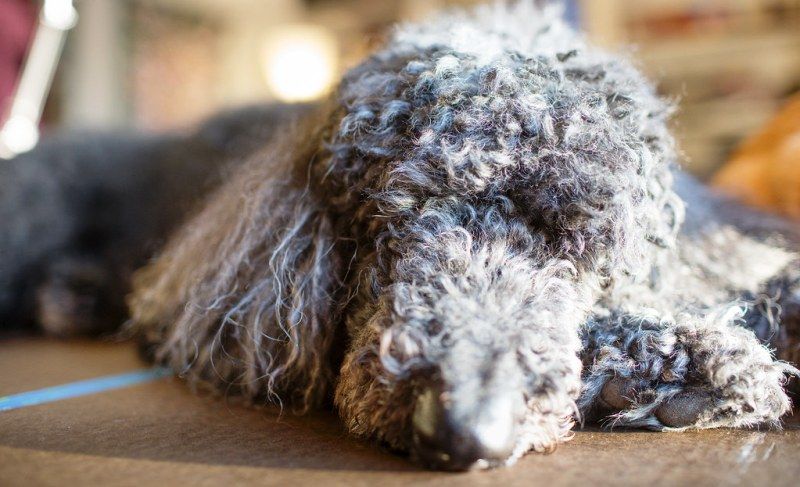 Unlike other dog breeds which shed, a Poodle’s fur usually grows continuously. If left ungroomed, their fur will become meshy and dreadlock-like.
Image: Flickr

26. The Artist Who Made Them Popular 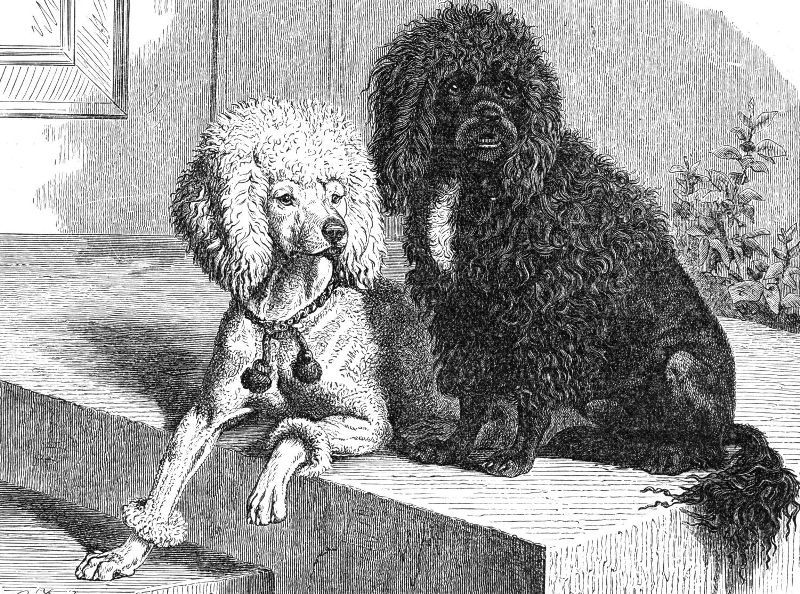 It was the drawings by German artist Albrecht Dürerm, which established Poodles as a popular dog breed in the 15th and 16th centuries.
Image: Wikimedia

Poodle owners must be proud to know that they have been honored in many dog shows including “Best in Show” at the Westminster Kennel Club Dog Show in 1991 and 2002, and at the World Dog Show in 2007 and 2010.
GIF: giphy.com

The smallest Poodles, i.e., Toy Poodles, were developed in England in the 18th century.
GIF: tumblr.com 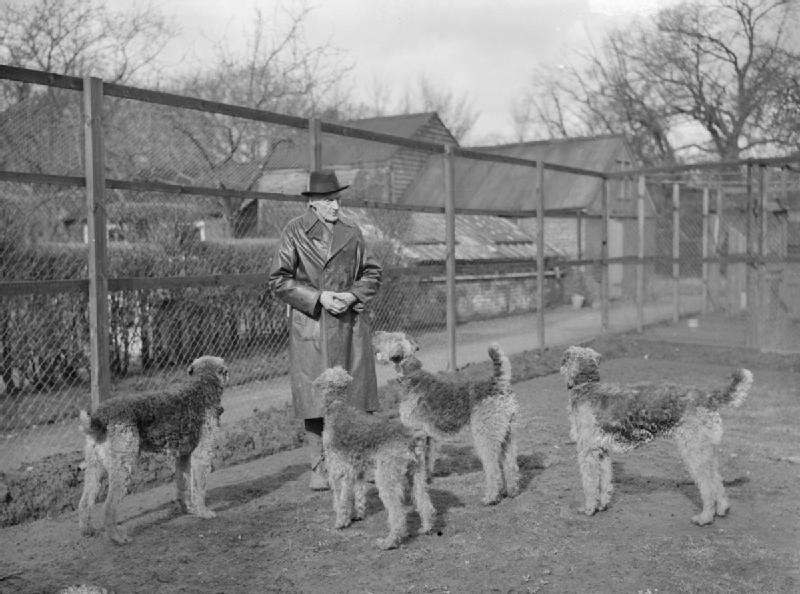 According to dogcrunch.com, during World War II in 1942, Poodles were among the 32 dog breeds, which were officially classified as war dogs by the US Army.
Image: Wikimedia

Among all the dog breeds, Poodles have lower neonatal mortality (death within 1 week from birth).

In popular culture, Poodles are often depicted as spoiled and perhaps obnoxious pets who are snobby, selfish, and vain. Poodle owners are also stereotyped as fussy, frivolous, and impractical.
GIF: giphy.com

18 Interesting Facts About “The Who” Band