Located in the northern part of Africa, the Sahara is the world’s largest hot desert; covering an area of more than 9 million square km. With a daunting climate, the Sahara is one of the harshest environments on the planet; temperature reaching above 50 °C in many places. The Sahara is one of the two major eco-regions in Africa, another is Sub-Saharan Africa. The Sahara and Sub-Saharan Africa are divided by the Sahel; ecoclimatic and biogeographic zone of transition. Apart from being the hottest ecozone in the world, Sahara is also famous for natural landscapes made by sand and wind. To know more, let us know some more interesting and amazing facts about the worlds largest hot desert, The Sahara. 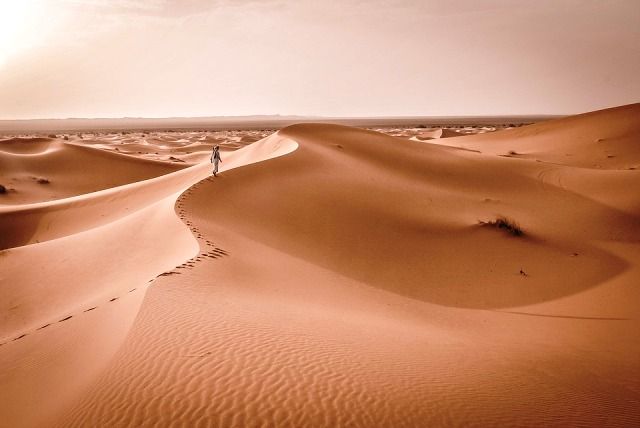 The Sahara Desert is the third-largest desert on the planet after Antarctica and Arctic deserts. It has an area of more than 9 million square km that is equal to the area of China or the USA.
Source: worldatlas.com

Antarctica and Arctic deserts are the cold deserts and the Sahara is a hot desert. The Sahara is the world’s largest hot desert. It roughly comprises the 31% area of the continent of Africa.
Source: thoughtco.com, Image: Wikimedia

4. Bordered by water and grassland

The Sahara is bordered by the Mediterranean Sea in the north, the Atlantic ocean in the west, the Red Sea in the east, and the Sahel (Semi-grassland) in the south.
Source: britannica.com

As per MIT (Massachusetts Institute of Technology) reports, the Sahara desert changes from dry to wet every 20,000 years. According to scientists, there were many crops grown in the area of the Sahara. Many crops such as wheat, rice, barley, etc. were grown thousands of years ago.
Source: voanews.com

7. Although it is desert, crops grow here

About 100 km west of Abu Simbel in Egypt, Nabta Playa is situated, which is an archaeological site which has Stonehenge type megalithic stones. It was founded around 7500 BC.
Source: web.archive.org, Image: Wikimedia

The Sahara is one of the driest spots in the world and driest in Africa. On average, it receives only 4 inches of rainfall every year.
Source: sciencing.com

10. Highlands in the Sahara

The Sahara is home to many mountain ranges and several active and dormant volcanos. Emi Koussi is a dormant volcano, which is the highest point in the Sahara with the height of 3,415 meters.
Source: britannica.com, Image: Wikipedia

Despite being very hot, people live here. There are 11 countries, which are located in the Sahara and about 20 million people are residing in these countries.
Source: worldpopulationreview.com

People live in the Sahara are mostly nomads. They wander in search of food from places to places. Tuareg people and Sahrawi people are the two main nomadic ethnic groups which are living in the region for thousands of years.
Source: bradshawfoundation.com, Image: Pexels

The Sahara is a very popular spot for its picturesque beauty of sand dunes. Dune is a hill of loose sand built by the flow of wind.
Source: saharasafaris.org, Images: Flickr

14. One River crosses the Sahara always

Rivers and streams are seasonal or very rare except the Nile River, world’s longest river. It rises from central Africa and empties into the Mediterranean Sea.
Source: nationalgeographic.org, Image: Flickr

15. Amazon is fertile due to the Sahara

According to scientists, the rain forests of the Amazon Valley in South America are dense and fertile due to dust particles of the Sahara. According to them, when strong winds sweep across the Sahara, the huge amount of dust filled with phosphorus gets carried across the Atlantic Ocean and gets deposited in the Amazon basin. Half of the dust is washed away by the rain and gets dropped on the Ocean’s floor. The remaining reaches Amazon basin and helps plants grow.
Source: nasa.gov

16. Mother is the head of the family here

About 1.2 million people of the Sahara follow Matriarchy. Men wear veils and women do not. Most of the women are literate whereas most of the men are illiterate. Women own business and property. These people belong to the Tuareg and Serer ethnic groups who live in the central region of the Sahara. Most of the people follow Islam.
Source: face2faceafrica.com, Image: Wikimedia

17. The project of Sahara Sea

Once, there was a hypothetical micro-engineering project to flood the sea level areas of the Sahara and to make the land fertile to grow crops.
Source: worldatlas.com

18. The Great Wall of Africa

Like the Great Wall of China, there lies a wall in Africa which is called “Moroccan Western Sahara Wall,” which is a 2700 km long wall (only 13% of the Great Wall of China). The wall was made in the 1980s to separate Morocco from the Polisario, a group of Sahrawi Republic independence fighters.
Source: forbes.com, Image: france24.com

19. A lake beneath the Sahara Desert

According to scientists, there was a lake beneath the Sahara desert. It was formed some 250,000 years ago when the Nile River pushed through a low channel near Wadi Tushka, a valley in Egypt. The lake had a basin area of 42,000 sq. km.
Source: insider.si.edu

20. The place of beautiful Oases

21. Snowfall in the Sahara

There are many mountain ranges in the Sahara. The most famous mountain ranges, which receive snowfall every year are- the Atlas Mountains, Hoggar (Ahaggar) Mountains, Tibesti Mountains, Air Mountains, etc. The Atlas Mountains are very famous for snowfall and ski resorts. In the highlands of the central Sahara, the weather gets cool sometimes; causing snowfall for a brief period. However, the inland Sahara has received snowfall only two times; in February 1979 and second in December 2016 in Aïn Séfra town of Algeria.
Source: earthnworld.com, Image: Flickr

Richat Structure is a circular feature in the Sahara’s Adrar Plateau, near Ouadane, west-central Mauritania. It looks like an elliptical dome with a diameter of 40 kilometres. It is called the ‘Eye of Africa’ or ‘Eye of the Sahara.’
Source: Wikipedia, Image: Flickr

23. The hottest place on Earth is here

Lake Chad is the largest freshwater lake in the Sahara. It is a very important lake because it provides water to more than 30 million people living in four countries surrounding it; Chad, Cameroon, Niger, and Nigeria. According to Scientists, around 6000 years ago, this lake was the largest freshwater lake in the world, but, its area has shrunk to only 1350 square km.
Source: outlookindia.com, Image: GoogleMaps

The most important animal in the desert is Camel. The Dromedary camel is found in the Sahara. This is a major source of transportation. Not only for transportation but also the camels are an important source of milk, wool, meat, and leather. Most of the other camel species have two humps, but the Dromedary is known for its single large hump.
Source: tripsavvy.com, Image: Pexels

26. Beware of these species!

The Sahara is full of dangerous species. They cause hundreds of deaths every year. Some of them are- Deathstalker Scorpion, Sand Viper, Desert Crocodile, Monitor Lizards, African Wild Dogs, etc.
Source: worldatlas.com, Images: Wikimedia

Saharan Silver Ant’s habitats are in the Sahara and the Arabian Desert. They make their homes in sand. They reside in high-temperature areas. The temperature of sand sometimes gets extremely high (sometimes, 80°C) due to which they come out of their homes for only ten minutes a day. Sometimes, they also get out of their homes due to the fear of predators.
Source: newscientist.com, Image: Wikimedia

28. Not Sand, Gravel is in a major amount

Many people think that the Sahara is made up of sand mostly, but it is not correct; the Sahara is, actually, made up mostly of gravels. The gravel’s amount in the Sahara is about 70% whereas, sand accounts for only 30%.
Source: factslegend.org

Marathon des Sables (English: Marathon of the Sands) is considered the world’s toughest marathon. It is a six-day marathon and has a total distance of 251 km. It takes place every year in Morocco in the Sahara Desert. In 2007, two competitors died.
Source: marathondessables.com, Image: Wikipedia

30. Once home to Barbary Lion

Once, the Sahara was home to the Barbary Lion who has gone extinct now. The lion survived until the early 1960s. It fell prey to trophy hunting mostly. It was the largest lion species and was admired for its massive size and dense mane.
Source: blogs.scientificamerican.com, Image: Flickr

Shukla Sundeep - August 24, 2015
0
Stephenie Meyer is an eminent American fiction writer and producer, best known for authoring the Twilight book series, which was later adapted for a...