1. It is Illegal to be Drunk in a Pub

Under the Metropolitan Act 1839, it is illegal for the “keeper of a public house to permit
drunkenness on premises’.” It is also against the law to serve alcohol to people who are already drunk – or even purchase it for them – under the Licensing Act 2003.
GIF: Tumblr

2. Performing ‘Happy Birthday’ in Public is a Breach of Copyright

Warner/Chappell Music claims to own exclusive copyright to what is generally regarded as the most famous song in the English language. Under copyright law, singing “Happy Birthday” in a public venue constitutes a performance of the song, which is why restaurant staff often sing other songs at birthday parties in order to avoid paying royalties.
GIF: giphy.com

3. You are Not Permitted to Slide on Snow and Ice

Under the Metropolitan Act 1839, it is illegal for any person “who shall make or use any slide upon ice and snow in any street or thoroughfare, to the common danger of the passengers” could receive a fine of up to £500.
GIF: giphy.com

4. Honking could lead you to Jail!

Honking aggressively could see a motorist get fined – even if a pedestrian or other road user acts dangerously or is at fault in some way. It is also illegal to sound a horn while stationed or driving in a built-up area between the hours of 11.30pm and 7.00am.

5. Asking to Borrow £1 Could Lead to a Prosecution

The Vagrancy Act 1824 was drafted in response to a large number of war veterans and Irish and Scottish migrants who came to London in search of work after the Napoleonic Wars. However, this also means that if you are caught short of cash and ask to borrow money from a stranger, you will be classed as a beggar and will be breaking the law.
GIF: giphy.com

6. It’s an Offence to Go to a Party Dressed as a Sailor

Under the Seamen’s and Soldiers’ False Characters Act of 1906, anyone attending a party dressed as a sailor could be sent to prison for a month and/or fined £500 for trying to pass themselves off as a member of the armed forces, or in the words of the act, trying to “personate the holder of a certificate of service or discharge.”
GIF: Tumblr

7. It’s Illegal to Carry a Plank of Wood on a Pavement 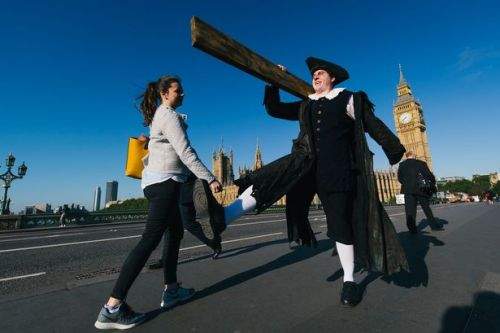 Under the Metropolitan Police Act 1839, it is illegal to walk around carrying building materials and tools on the street. Under Section 54 of the Act, it is an offence to carry a plank of wood while walking on a pavement, and it is also unlawful to “roll or carry any cask, tub, hoop, or wheel, or any ladder, plank, pole, show-board, or placard, upon any footway, except for the purpose of loading or unloading any cart or carriage, or of crossing the footway”.
Image: irishmirror.ie

8. You Must Clear Your Whole Windscreen of Ice Before Driving

During cold weather, it is an offense not to clear the whole windshield before driving off. You can also be fined for failing to clear snow from the roof before embarking on your journey.

9. You are Not Allowed to Scribble on Banknotes

Defacing money in the UK is subject to a penalty under the Currency and Bank Notes Act 1928, although, ironically, burning money is not illegal. The reason for this is because, while you could attempt to keep a defaced banknote in circulation, a burned and destroyed banknote would obviously have no value.
GIF: Tumblr

10. It’s Illegal to Fly a Kite in a Public Place

Flying a kite in a public place is illegal under the Metropolitan Police Act 1839. According to the Act, any person “who shall fly any kite or play at any game to the annoyance of the inhabitants or passengers” could be liable for a fine of up to £500.
GIF: Tumblr

Clapham & Collinge, a leading firm of solicitors in Norwich, offers a wide range of legal services for businesses and individuals including dispute resolution, conveyancing, employment law, and wills and probate.